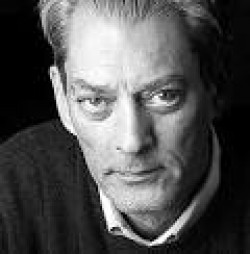 Paul Benjamin Auster (born February 3, 1947) is an American writer and director whose writing blends absurdism, existentialism, crime fiction, and the search for identity and personal meaning in works such as The New York Trilogy (1987), Moon Palace (1989), The Music of Chance (1990), The Book of Illusions (2002), and The Brooklyn Follies (2005). His books have been translated into more than forty languages.[2]

Paul Auster was born in Newark, New Jersey,[3] to Jewish middle-class parents of Polish descent, Queenie (née Bogat) and Samuel Auster.[4][5] He is the older cousin of conservative columnist Lawrence Auster.[citation needed] He grew up in South Orange, New Jersey[6] and Newark[7] and graduated from Columbia High School in Maplewood.[8]

After graduating from Columbia University in 1970, he moved to Paris, France where he earned a living translating French literature. Since returning to the U.S. in 1974, he has published poems, essays, and novels of his own, as well as translations of French writers such as Stéphane Mallarmé and Joseph Joubert. 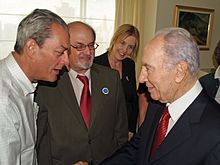 Following his acclaimed debut work, a memoir entitled The Invention of Solitude, Auster gained renown for a series of three loosely connected detective stories published collectively as The New York Trilogy. These books are not conventional detective stories organized around a mystery and a series of clues. Rather, he uses the detective form to address existential issues and questions of identity, space, language, and literature, creating his own distinctively postmodern (and critique of postmodernist) form in the process. Comparing the two works, Auster said, "I believe the world is filled with strange events. Reality is a great deal more mysterious than we ever give it credit for. In that sense, the Trilogy grows directly out of The Invention of Solitude."[9]

The search for identity and personal meaning has permeated Auster's later publications, many of which concentrate heavily on the role of coincidence and random events (The Music of Chance) or increasingly, the relationships between people and their peers and environment (The Book of Illusions, Moon Palace). Auster's heroes often find themselves obliged to work as part of someone else's inscrutable and larger-than-life schemes. In 1995, Auster wrote and co-directed the films Smoke (which won him the Independent Spirit Award for Best First Screenplay) and Blue in the Face. Auster's more recent works, Oracle Night (2003), The Brooklyn Follies (2005), and the novella Travels in the Scriptorium, have also met critical acclaim.

As of November 2010, Auster has been at work on a new novel, but has said that in the past few years he has found it harder to come up with ideas: "I used to have a backlog of stories, but a few years ago I found the drawers were empty. I guess I’m getting to the point where I tell myself if I can’t write another book it’s not a tragedy. Does it matter if I publish 16 or 17 novels? Unless it’s absolutely urgent, there’s no point in writing."[14]

In 2012, Auster was quoted as saying in an interview that he would not visit Turkey to protest its treatment of journalists. The Turkish Prime Minister Recep Tayyip Erdoğan replied: "As if we need you! Who cares if you come or not?"[15] Auster responded: "According to the latest numbers gathered by International PEN, there are nearly one hundred writers imprisoned in Turkey, not to speak of independent publishers such as Ragıp Zarakolu, whose case is being closely watched by PEN Centers around the world".[16]

According to a dissertation by Heiko Jakubzik at the University of Heidelberg, two central influences in Paul Auster's writing are Jacques Lacan's psychoanalysis, and the American transcendentalism of the early to middle 19th century, as exemplified by Henry David Thoreau and Ralph Waldo Emerson.

Lacan is considered to be one of the key figures of French poststructuralism. Some academics are keen to discern traces of other poststructuralist philosophers throughout Auster's oeuvre, mainly Jacques Derrida, Jean Baudrillard and Michel de Certeau, although Auster has claimed to find such philosophies "'unreadable".[17]

The transcendentalists believed that the symbolic order of civilization has separated us from the natural order of the world, and that by moving into nature, as Thoreau did, as he described in Walden, it would be possible to return to this natural order.

The common factor of both ideas is the question of the meaning of symbols for human beings.[18] Auster's protagonists are often writers who establish meaning in their lives through writing, and they try to find their place within the natural order, to be able to live within "civilization" again.

Edgar Allan Poe, Samuel Beckett and Herman Melville have also had a strong influence on Auster's writing. Not only do their characters reappear in Auster's work (such as William Wilson in City of Glass or Hawthorne's Fanshawe in The Locked Room, both from The New York Trilogy), Auster also uses variations on the themes of these writers.

Auster claims that people are so influenced by the continuity among them that they do not see the elements of coincidence, inconsistency and contradiction in their own lives. He writes, "This idea of contrasts, contradictions, paradox, I think, gets very much to the heart of what novel writing is for me. It's a way for me to express my own contradictions."[21]

Failure, in Paul Auster's works, is not just the opposite of the happy ending. In Moon Palace and The Book of Illusions, it comes from the individual's uncertainty about the status of their own identity. The protagonists start a search for their own identity and reduce their life to the absolute minimum. From this zero point they gain new strength and start their new life, and they also are able to regain contact with their surroundings. A similar development may also be seen in City of Glass and The Music of Chance. Failure in this context is not the "nothing", it is the beginning of something all new.

Auster's protagonists often go through a process which reduces their support structure to an absolute minimum. They sever all contact with family and friends, go hungry, and lose or give away all their belongings. Out of this state of "nothingness", they either acquire new strength to reconnect with the world, or they fail and disappear for good.

But in the end, he manages to resolve the question for himself - more or less. He finally comes to accept his own life, to understand that no matter how bewitched and haunted he is, he has to accept reality as it is, to tolerate the presence of ambiguity within himself.— Paul Auster about the protagonist of The Locked Room, quoted in Martin Klepper, Pynchon, Auster, DeLillo.[22]

"Over the past twenty-five years," opined Michael Dirda in The New York Review of Books in 2008, "Paul Auster has established one of the most distinctive niches in contemporary literature."[23] Dirda also has extolled his loaded virtues in The Washington Post:

Ever since City of Glass, the first volume of his New York Trilogy, Auster has perfected a limpid, confessional style, then used it to set disoriented heroes in a seemingly familiar world gradually suffused with mounting uneasiness, vague menace and possible hallucination. His plots — drawing on elements from suspense stories, existential récit, and autobiography — keep readers turning the pages, but sometimes end by leaving them uncertain about what they've just been through.[24]

Literary critic James Wood, however, offers Auster little praise in his piece "Shallow Graves" in the November 30, 2009, issue of The New Yorker:

What Auster often gets instead is the worst of both worlds: fake realism and shallow skepticism. The two weaknesses are related. Auster is a compelling storyteller, but his stories are assertions rather than persuasions. They declare themselves; they hound the next revelation. Because nothing is persuasively assembled, the inevitable postmodern disassembly leaves one largely untouched. (The disassembly is also grindingly explicit, spelled out in billboard-size type.) Presence fails to turn into significant absence, because presence was not present enough.[25] 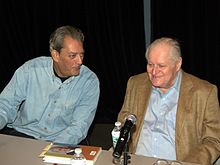 Auster with John Ashbery at the Brooklyn Book Festival

Dirda and Wood—both based in the United States—assess Auster's literary qualities more than his view of American society, which cultural historian Morris Berman suggests is the basis for his European popularity:

It’s interesting that the theme of Paul Auster’s novels is that American society is incoherent, that it lacks a true identity, and that it’s nothing more than a hall of mirrors. He’s been saying that for decades and by and large Americans don’t know who Paul Auster is and they don’t read him. Auster is tremendously popular in Europe, he’s been translated into more than twenty languages: those are the bulk of his sales. Americans are not interested in this kind of perception.[26]

Auster was married to the writer Lydia Davis. They have one son together, Daniel Auster.[27]

Auster and his second wife, writer Siri Hustvedt (the daughter of professor and scholar Lloyd Hustvedt), were married in 1981, and they live in Brooklyn.[3] Together they have one daughter, Sophie Auster.