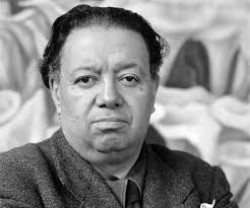 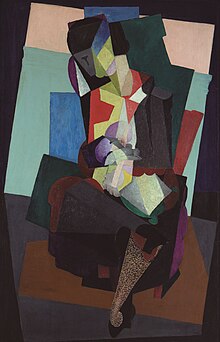 Rivera was born in Guanajuato, Mexico, to a well-to-do family, the son of María del Pilar Barrientos and Diego Rivera Acosta.[1] Diego had a twin brother named Carlos, who died two years after they were born.[2] Rivera was said to have Converso ancestry (having ancestors who were forced to convert from Judaism to Catholicism).[3] Rivera wrote in 1935: "My Jewishness is the dominant element in my life."[4] Rivera began drawing at the age of three, a year after his twin brother's death. He had been caught drawing on the walls. His parents, rather than punishing him, installed chalkboards and canvas on the walls. As an adult, he married Angelina Beloff in 1911, and she gave birth to a son, Diego (1916–1918). Maria Vorobieff-Stebelska gave birth to a daughter named Marika in 1918 or 1919 when Rivera was married to Angelina (according to House on the Bridge: Ten Turbulent Years with Diego Rivera and Angelina's memoirs called Memorias). He married his second wife, Guadalupe Marín, in June 1922, with whom he had two daughters: Ruth and Guadalupe. He was still married when he met art student Frida Kahlo. They married on August 21, 1929 when he was 42 and she was 22. Their mutual infidelities and his violent temper led to divorce in 1939, but they remarried December 8, 1940 in San Francisco. Rivera later married Emma Hurtado, his agent since 1946, on July 29, 1955, one year after Kahlo's death. 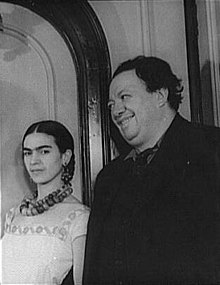 Rivera was an atheist. His mural Dreams of a Sunday in the Alameda depicted Ignacio Ramírez holding a sign which read, "God does not exist". This work caused a furor, but Rivera refused to remove the inscription. The painting was not shown for nine years – until Rivera agreed to remove the inscription. He stated: "To affirm 'God does not exist', I do not have to hide behind Don Ignacio Ramírez; I am an atheist and I consider religions to be a form of collective neurosis."[5]

From the age of ten, Rivera studied art at the Academy of San Carlos in Mexico City. He was sponsored to continue study in Europe by Teodoro A. Dehesa Méndez, the governor of the State of Veracruz. After arrival in Europe in 1907, Rivera initially went to study with Eduardo Chicharro in Madrid, Spain, and from there went to Paris, France, to live and work with the great gathering of artists in Montparnasse, especially at La Ruche, where his friend Amedeo Modigliani painted his portrait in 1914.[6] His circle of close friends, which included Ilya Ehrenburg, Chaim Soutine, Amedeo Modigliani and Modigliani's wife Jeanne Hébuterne, Max Jacob, gallery owner Léopold Zborowski, and Moise Kisling, was captured for posterity by Marie Vorobieff-Stebelska (Marevna) in her painting "Homage to Friends from Montparnasse" (1962).[7]

In those years, Paris was witnessing the beginning of Cubism in paintings by such eminent painters as Pablo Picasso, Georges Braque and Juan Gris. From 1913 to 1917, Rivera enthusiastically embraced this new school of art. Around 1917, inspired by Paul Cézanne's paintings, Rivera shifted toward Post-Impressionism with simple forms and large patches of vivid colors. His paintings began to attract attention, and he was able to display them at several exhibitions. 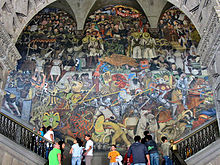 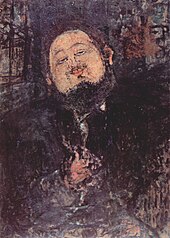 In 1920, urged by Alberto J. Pani, the Mexican ambassador to France, Rivera left France and traveled through Italy studying its art, including Renaissance frescoes. After José Vasconcelos became Minister of Education, Rivera returned to Mexico in 1921 to become involved in the government sponsored Mexican mural program planned by Vasconcelos.[9] See also Mexican muralism. The program included such Mexican artists as José Clemente Orozco, David Alfaro Siqueiros, and Rufino Tamayo, and the French artist Jean Charlot. In January 1922,[10] he painted – experimentally in encaustic – his first significant mural Creation[11] in the Bolívar Auditorium of the National Preparatory School in Mexico City while guarding himself with a pistol against right-wing students. 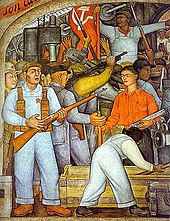 In the autumn of 1922, Rivera participated in the founding of the Revolutionary Union of Technical Workers, Painters and Sculptors, and later that year he joined the Mexican Communist Party[12] (including its Central Committee). His murals, subsequently painted in fresco only, dealt with Mexican society and reflected the country's 1910 Revolution. Rivera developed his own native style based on large, simplified figures and bold colors with an Aztec influence clearly present in murals at the Secretariat of Public Education in Mexico City[13] begun in September 1922, intended to consist of one hundred and twenty-four frescoes, and finished in 1928.[10]

Recreation of Man at the Crossroads (renamed Man, Controller of the Universe), originally created in 1934 (detail)

His art, in a fashion similar to the steles of the Maya, tells stories. The mural En el Arsenal (In the Arsenal)[14] shows on the right-hand side Tina Modotti holding an ammunition belt and facing Julio Antonio Mella, in a light hat, and Vittorio Vidali behind in a black hat. However, the En el Arsenal detail shown does not include the right-hand side described nor any of the three individuals mentioned; instead it shows the left-hand side with Frida Kahlo handing out munitions. Leon Trotsky lived with Rivera and Kahlo for several months while exiled in Mexico.[15] Some of Rivera's most famous murals are featured at the National School of Agriculture (Chapingo Autonomous University of Agriculture) at Chapingo near Texcoco (1925–27), in the Cortés Palace in Cuernavaca (1929–30), and the National Palace in Mexico City (1929–30, 1935).[16][17][18]

Rivera painted murals in the main hall and corridor at the Chapingo Autonomous University of Agriculture (UACh). He also painted a fresco mural titled "Tierra Fecundada" ("Fertile Land" in English) in the university's chapel between 1923 and 1927. "Fertile Land" depicts the revolutionary struggles of Mexico's peasant (farmers) and working classes (industry) in part through the depiction of hammer and sickle joined by a star in the soffit of the chapel. In the mural, a "propagandist" points to another hammer and sickle. The mural features a woman with an ear of corn in each hand, which art critic Antonio Rodriguez describes as evocative of the Aztec goddess of maize in his book "Canto a la Tierra: Los murales de Diego Rivera en la Capilla de Chapingo."

The corpses of revolutionary heroes Emiliano Zapata and Otilio Montano are shown in graves, their bodies fertilizing the maize field above. A sunflower in the center of the scene "glorifies those who died for an ideal and are reborn, transfigured, into the fertile cornfield of the nation," writes Rodrigues. The mural also depicts Rivera's wife Guadalupe Marin as a fertile nude goddess and their daughter Guadalupe Rivera y Marin as a cherub.[19]

The mural was slightly damaged in an earthquake, but has since been repaired and touched up, remaining in pristine form. [20] 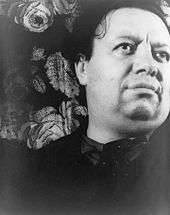 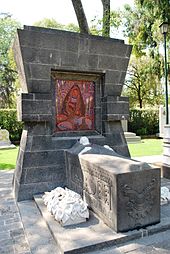 In the autumn of 1927, Rivera arrived in Moscow, accepting an invitation to take part in the celebration of the 10th anniversary of the October Revolution. The following year, while still in Russia, he met the visiting Alfred H. Barr, Jr., who would soon become Rivera's friend and patron, as well as the founding director of the Museum of Modern Art.[21] Rivera was commissioned to paint a mural for the Red Army Club in Moscow, but in 1928 he was ordered out by the authorities because of involvement in anti-Soviet politics, and he returned to Mexico. In 1929, Rivera was expelled from the Mexican Communist Party. His 1928 mural In the Arsenal was interpreted by some as evidence of Rivera's prior knowledge of the murder of Julio Antonio Mella allegedly by Stalinist assassin Vittorio Vidali. After divorcing Guadalupe (Lupe) Marin, Rivera married Frida Kahlo in August 1929. Also in 1929, the first English-language book on Rivera, American journalist Ernestine Evans's The Frescoes of Diego Rivera, was published in New York City. In December, Rivera accepted a commission to paint murals in the Palace of Cortés in Cuernavaca from the American Ambassador to Mexico.[22]

In September 1930, Rivera accepted an invitation from architect Timothy L. Pflueger to paint for him in San Francisco. After arriving in November accompanied by Kahlo, Rivera painted a mural for the City Club of the San Francisco Stock Exchange for US$2,500[23] and a fresco for the California School of Fine Art, later relocated to what is now the Diego Rivera Gallery at the San Francisco Art Institute.[22] Kahlo and Rivera worked and lived at the studio of Ralph Stackpole, who had suggested Rivera to Pflueger. Rivera met Helen Wills Moody, a famous tennis player, who modeled for his City Club mural.[23] In November 1931, Rivera had a retrospective exhibition at the Museum of Modern Art in New York City; Kahlo was present.[24] Between 1932 and 1933, he completed a famous series of twenty-seven fresco panels entitled Detroit Industry on the walls of an inner court at the Detroit Institute of Arts. During the McCarthyism of the 1950s, a large sign was placed in the courtyard defending the artistic merit of the murals while attacking his politics as "detestable."[21]

His mural Man at the Crossroads, begun in 1933 for the Rockefeller Center in New York City, was removed after a furor erupted in the press over a portrait of Vladimir Lenin it contained. When Diego refused to remove Lenin from the painting, Diego was ordered to leave. One of Diego's assistants managed to take a few pictures of the work so Diego was able to later recreate it. The American poet Archibald MacLeish wrote six "irony-laden" poems about the mural.[25] The New Yorker magazine published E. B. White's poem "I paint what I see: A ballad of artistic integrity".[26] As a result of the negative publicity, a further commission was canceled to paint a mural for an exhibition at the Chicago World's Fair. Rivera issued a statement that with the money left over from the commission of the mural at Rockefeller Center (he was paid in full though the mural was supposedly destroyed. Rumors have floated that the mural was actually covered over rather than brought down and destroyed.), he would repaint the same mural over and over wherever he was asked until the money ran out.

In December 1933, Rivera returned to Mexico, and he repainted Man at the Crossroads in 1934 in the Palacio de Bellas Artes in Mexico City. This surviving version was called Man, Controller of the Universe. On June 5, 1940, invited again by Pflueger, Rivera returned for the last time to the United States to paint a ten-panel mural for the Golden Gate International Exposition in San Francisco. Pan American Unity was completed November 29, 1940. As he was painting, Rivera was on display in front of Exposition attendees. He received US$1,000 per month and US$1,000 for travel expenses.[23] 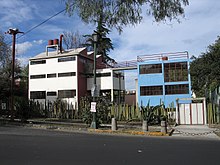 The mural includes representations of two of Pflueger's architectural works as well as portraits of Kahlo, woodcarver Dudley C. Carter, and actress Paulette Goddard, who is depicted holding Rivera's hand as they plant a white tree together.[23] Rivera's assistants on the mural included the pioneer African-American artist, dancer, and textile designer Thelma Johnson Streat. The mural and its archives reside at City College of San Francisco.[27][28]

In 1926, Rivera became a member of AMORC, the Ancient Mystical Order Rosae Crucis, an occult organization founded by American occultist Harvey Spencer Lewis. In 1926, Rivera was among the founders of AMORC's Mexico City lodge, called Quetzalcoatl, and painted an image of Quetzalcoatl for the local temple.[29] In 1954, when he tried to be readmitted into the Mexican Communist Party from which he had previously been excluded because of his support of Trotsky, Rivera had to justify his AMORC activities. The Mexican Communist Party at that time excluded from its ranks members of Freemasonry, and regarded AMORC as suspiciously similar to Freemasonry.[30]Rivera answered that, by joining AMORC, he wanted to infiltrate a typical “Yankee” organization on behalf of Communism. However, he also claimed that AMORC was “essentially materialist, insofar as it only admits different states of energy and matter, and is based on ancient Egyptian occult knowledge from Amenhotep IV and Nefertiti.”[31]

Diego Rivera was portrayed by Rubén Blades in Cradle Will Rock (1999), by Alfred Molina in Frida (2002), and (in a brief appearance) by José Montini in Eisenstein in Guanajuato (2015).