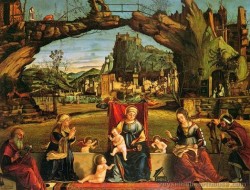 ittore Carpaccio (Italian pronunciation: [vitˈtoːre karˈpattʃo]; c. 1465 – 1525/1526) was a Venetian painter of the Venetian school, who studied under Gentile Bellini. He is best known for a cycle of nine paintings, The Legend of Saint Ursula. His style was somewhat conservative, showing little influence from the Humanist trends that transformed Italian Renaissance painting during his lifetime. He was influenced by the style of Antonello da Messina and Early Netherlandish art. For this reason, and also because so much of his best work remains in Venice, his art has been rather neglected by comparison with other Venetian contemporaries, such as Giovanni Bellini or Giorgione.

Carpaccio was born in Venice, the son of Piero Scarpazza, a leather merchant. Carpaccio, or Scarpazza, as the name was originally rendered, came from a family originally from Mazzorbo, an island in the diocese of Torcello. Documents trace the family back to at least the 13th century, and its members were diffuse and established throughout Venice. His principal works were executed between 1490 and 1519, ranking him among the early masters of the Venetian Renaissance. He is first mentioned in 1472 in a will of his uncle Fra Ilario. Upon entering the Humanist circles of Venice, he changed his family name to Carpaccio. He was a pupil (not, as sometimes thought, the master) of Lazzaro Bastiani, who, like the Bellini and Vivarini, was the head of a large atelier in Venice.

The winged lion of Mark the Evangelist in the Doge's Palace

Carpaccio's earliest known solo works are a Salvator Mundi in the Collezione Contini Bonacossi and a Pietà now in the Palazzo Pitti. These works clearly show the influence of Antonello da Messina and Giovanni Bellini - especially in the use of light and colors - as well as the influence of the schools of Ferrara and Forlì.

In 1490 Carpaccio began the famous Legend of St. Ursula, for the Venetian Scuola dedicated to that saint. The subject of the works, which are now in the Gallerie dell'Accademia, was drawn from the Golden Legend of Jacopo da Varagine. In 1491 he completed the Glory of St. Ursula altarpiece. Indeed, many of Carpaccio's major works were of this type: large scale detachable wall-paintings for the halls of Venetian scuole, which were charitable and social confraternities. Three years later he took part in the decoration of the Scuola Grande di San Giovanni Evangelista, painting the Miracle of the Relic of the Cross at the Ponte di Rialto.

St. Augustine in His Study (Carpaccio)

In the opening decade of the sixteenth century, Carpaccio embarked on the works that have since awarded him the distinction as the foremost orientalist painter of his age.[1] From 1502 to 1507 Carpaccio executed another notable series of panels for the Scuola di San Giorgio degli Schiavoni which served one of Venice's immigrant communities (Schiavoni meaning "Slavs" in Venetian dialect). Unlike the slightly old-fashioned use of a continuous narrative sequence found in the St. Ursula series, wherein the main characters appear multiple times within each canvas, each work in the Schiavoni series concentrates on a single episode in the lives of the Dalmatian's three patron Saints: St. Jerome, St. George and St. Trifon. These works are thought of as "orientalist" because they offer evidence of a new fascination with the Levant: a distinctly middle-eastern looking landscape takes an increasing role in the images as the backdrop to the religious scenes. Moreover, several of the scenes deal directly with cross-cultural issues, such as translation and conversion.

For example, St. Jerome, translated the Greek Bible to Latin (known as the Vulgate) in the fourth century. Then the St. George story addressed the theme of conversion and the supremacy of Christianity.

According to the Golden Legend, George, a Christian knight, rescues a Libyan princess who has been offered in sacrifice to a dragon. Horrified that her pagan family would do such a thing, George brings the dragon back to her town and compels them into being baptized.[2] The St. George tale was enormously popular during the renaissance, and the confrontation between the knight and the dragon was painted by numerous artists. Carpaccio's depiction of the event thus has a long history; less common is his rendition of the baptism moment. Although unusual in the history of St. George pictures, St. George Baptizing the Selenites offers a good example of the type of oriental subjects were popular in Venice at the time: great care and attention is given the foreign costumes, and hats are especially significant in indicating the exotic. Note that in The Baptism one of the recent converts has ostentatiously placed his elaborate red-and-white, jewel-tipped turban on the ground in order to receive the sacrament.

Fortini Brown argues that this increased interest in exotic eastern subject matter is a result of worsening relations between Venice and the Ottoman Turks: "as it became more of a threat, it also became more of an obsession."[3] His relief of the façade of the former School of the Albanians in Venice reflects this interest, as it commemorates two sieges of Shkodra in 1474 and 1478, the latter of which Sultan Mehmed II directed personally.

At about the same time, from 1501–1507, he worked in the Doge's Palace, together with Giovanni Bellini, in decorating of the Hall of the Great Council. Like many other major works, the cycle was entirely lost in the disastrous fire of 1577.

Dating from 1504–1508 is the cycle of Life of the Virgin for Scuola degli Albanesi,[4] largely executed by assistants, and now divided between the Accademia Carrara of Bergamo, the Pinacoteca di Brera in Milan, and the Ca' d'Oro of Venice.

In later years Carpaccio appears to have been influenced by Cima da Conegliano, as evidenced in the Death of the Virgin from 1508, at Ferrara. In 1510 Carpaccio executed the panels of Lamentation on the Dead Christ and The Meditation on the Passion, where the sense of bitter sorrow found in such works by Mantegna is backed by extensive use of allegoric symbolism. Of the same year is a Young Knight in a Landscape, now in the Thyssen-Bornemisza Collection of Madrid.

In 1516, he painted a Sacra Conversatione painting in then Venetian town of Capodistria (now Koper in Slovenia), which is hanging in its Cathedral of the Assumption. Carpaccio created several more works in Capodistria, where he spent the last years of his life and also died.[5]

Between 1511 and 1520 he finished five panels on the Life of St. Stephen for the Scuola di Santo Stefano. Carpaccio's late works were mostly done in the Venetian mainland territories, and in collaboration with his sons Benedetto and Piero. One of his pupils was Marco Marziale. 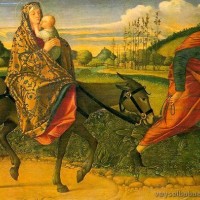 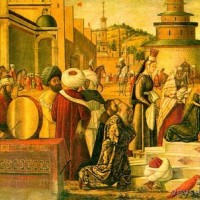 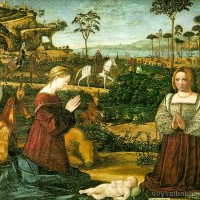 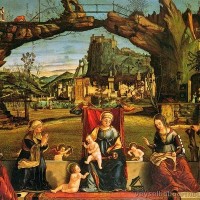 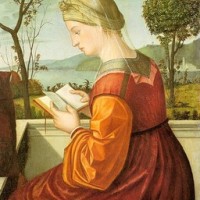 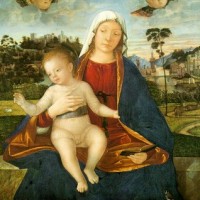 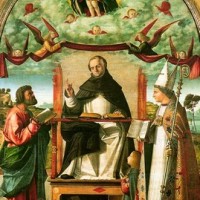 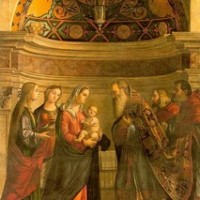 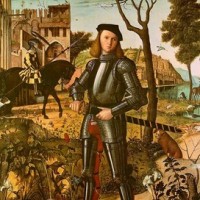 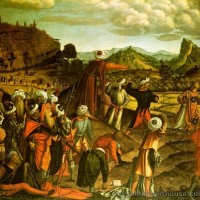 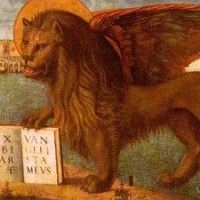 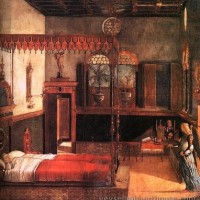 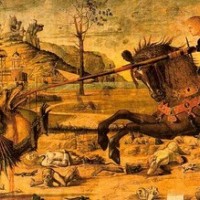 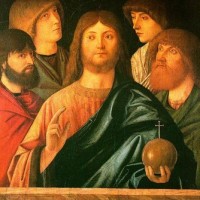 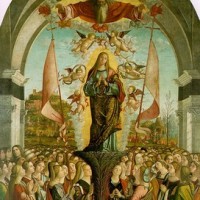 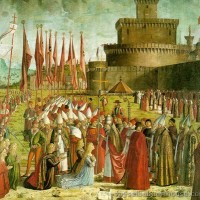 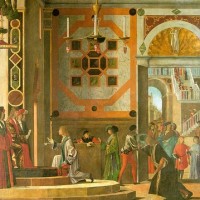 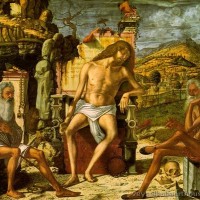 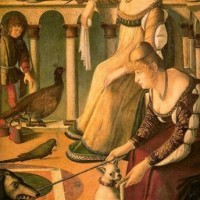