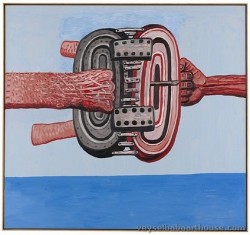 Philip Guston, born Phillip Goldstein (June 27, 1913 – June 7, 1980), was a painter and printmaker in the New York School, an art movement that included many abstract expressionists like Jackson Pollock and Willem de Kooning. In the late 1960s Guston helped to lead a transition from abstract expressionism to neo-expressionism in painting, abandoning so-called "pure abstraction" in favor of more representational, cartoonish renderings of various personal situations, symbols and objects.

He is known to the world for his cartoonish paintings of an existential, lugubrious nature that used a limited palette and were created in the period after 1968. Moreover, he was a lecturer and teacher at a number of universities and so he is also regarded for his words and teachings, collected in the book Philip Guston: Collected Writings, Lectures, and Conversations (Documents of Twentieth-Century Art).

Born in 1913 in Montreal, Guston moved with his family to Los Angeles as a child. His Ukrainian Jewish parents had escaped persecution when they moved to Canada from Odessa, Ukraine. Guston and his family were aware of the regular Ku Klux Klan activities against Jews, blacks and others which took place across California. In 1923, possibly owing to persecution or the difficulty in securing income, his father hanged himself in the shed, and the young Guston found the body.[1]

Guston's early art was figurative and representational. His mother supported his artistic inclinations and he often made drawings in an environment of his choosing: a small closet, lit by a hanging bulb.

Guston then began painting at the age of 14 when, in 1927, he enrolled in the Los Angeles Manual Arts High School. Both he and Jackson Pollock studied under Frederick John de St. Vrain Schwankovsky and were introduced to European modern art, Eastern philosophy, theosophy and mystic literature. During high school, Guston and Jackson Pollock published a paper opposing the high school's emphasis on sports over art. Their criticism led to both being expelled, but Pollock eventually returned and graduated.

Apart from his high school education and a one-year scholarship at the Otis Art Institute in Los Angeles, Guston remained a largely self-taught artist. At the Otis Art Institute, Guston felt unfulfilled by the academic approach which limited him to drawing from plaster casts instead of the live model. Before leaving the school, Guston spent a night in the studio making drawings of the figurative plasters scattered all over the floor.

In 1931 Guston produced an indoor mural with Reuben Kadish in an effort by the local John Reed Club to fundraise money in support of the unjustly accused in the Scottsboro Boys Trial. This mural was then defaced by local police forces, known as as Red Squads. The subsequent court ruling found no fault on the part of L.A. police, even though irreversible damage was sustained to many works of art. This marks just one instance of political corruption witnessed by Guston, a theme which he would return to paint in his late style.[citation needed]

In 1934, Philip Goldstein (as Guston was then known),[2] along with Reuben Kadish, joined poet and friend Jules Langsner on a trip to Mexico, where they were given a 1,000-square-foot (93 m2) wall in the former summer palace of the Emperor Maximilian in the state capital of Morelia; they produced the impressive The Struggle Against Terror, an antifascist mural clearly influenced by the work of David Siqueiros.[citation needed] A two-page review in Time magazine quoted Siqueiros's description of them: "the most promising painters in either the US or Mexico". In Mexico he also met and spent time with Frida Kahlo and husband Diego Rivera.

In 1934-35, Guston and Kadish completed a mural that remains to this day at City of Hope Medical Center, a tuberculosis hospital at the time, located in Duarte, California, .

In September 1935 he moved to New York where he worked as an artist in the WPA program. In 1937 he married artist and poet, Musa McKim, whom he first met at Otis, and they collaborated on several WPA murals. During this period his work included strong references to Renaissance painters such as Piero della Francesca, Paolo Uccello, Masaccio, and Giotto. He was also influenced by American Regionalists and Mexican mural painters. In 1938 he painted a post office mural in the US post office in Commerce, Georgia, entitled Early Mail Service and the Construction of Railroads.

Italian painter Giorgio de Chirico was a powerful and enduring influence, who Guston acknowledged throughout his career. Guston's daughter, Musa Mayer,recalled how the artist kept a De Chirico monograph in his studio in her book Night Studio: A memoir of Philip Guston, and he would often refer to it. 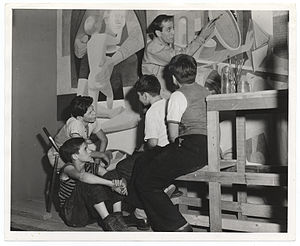 Philip Guston working on a mural, 1940

Guston's first foray into teaching was as an artist-in-residence at the School of Art and Art History at the University of Iowa[3]from 1941 to 1945. He completed a mural there for the Social Security building in Washington, D.C. before turning to easel painting. He had his first solo exhibition in 1944. After this he was an artist-in-residence at Washington University in St. Louis, Missouri until 1947. He continued to teach at New York University in New York City and at the Pratt Institute in Brooklyn. Much later, from 1973 to 1978, he conducted a monthly graduate seminar at Boston University.[4]

In the 1950s, Guston achieved success and renown as a first-generation abstract expressionist, although he preferred the term New York School. During this period his paintings often consisted of blocks and masses of gestural strokes and marks of color floating within the picture plane. These works, with marks often grouped toward the center of the composition, recall the "plus and minus" compositions by Piet Mondrian or the late Nymphea canvases by Monet. Guston used a relatively limited palette favoring black and white, greys and reds. It was a palette that would remain evident in his later work.

In 1967, Guston moved to Woodstock, New York. He was increasingly frustrated with abstraction and began painting representationally again, but in a rather personal, cartoonish manner. The first exhibition of these new figurative paintings was held in 1970 at the Marlborough Gallery in New York. It received scathing reviews from most of the art establishment. Memorably, New York Times art critic Hilton Kramer ridiculed Guston's new style in an article entitled "A Mandarin Pretending to Be a Stumblebum",[9] referring to "mandarin" in the sense of an influential figure and "stumblebum" meaning a clumsy person.[10] He called the act of changing styles an "illusion" and an "artifice". The initial reaction of Robert Hughes, critic for Time magazine, who later changed his views, was put into a scathing review entitled "Ku Klux Komix".[11]

One of the few who instantly understood the importance of these paintings was the painter Willem de Kooning, who at the time said to Guston that they were "about freedom" (cited in Musa Mayer's biography of her father, Night Studio).[12] Cherries III from 1976, held in the collection of the Honolulu Museum of Art, is an example of his late style representational paintings. Although cherries are a mundane subject, their spiky stems can be a metaphor for the crudeness and brutality of modern life.[13]

As a result of the poor reception of his new figurative style, Guston isolated himself even more in Woodstock, far from the art world that had so utterly misunderstood his art. His contract with the Marlborough gallery was not renewed and after a short period without any dealer he joined the recently opened David McKee Gallery in New York City (he had met McKee at Marlborough). He remained faithful to that gallery until the end of his life.

In 1960, at the peak of his activity as an abstractionist, Guston said, "There is something ridiculous and miserly in the myth we inherit from abstract art. That painting is autonomous, pure and for itself, therefore we habitually analyze its ingredients and define its limits. But painting is 'impure'. It is the adjustment of 'impurities' which forces its continuity. We are image-makers and image-ridden".[citation needed] From 1968 onwards, after moving away from abstractionism, he made these words his motto. In this body of work he created a lexicon of images such as Klansmen, lightbulbs, shoes, cigarettes and clocks. In late 2009, the McKee gallery, Guston's historic dealer, mounted a show revealing that lexicon in 49 small oil paintings on panel painted between 1969 and 1972 that had never been publicly displayed as a whole. Guston is best known to the world for these late existential and lugubrious paintings, which, at the time of his death in 1980, had reached a wide audience, and found great popular acceptance.[citation needed] Very late in his life he attempted to expand his palette and reintroduce abstraction to his work, as can be seen in some of his untitled work from 1980 that has more blues and yellows.

Guston died in 1980 of a heart attack in Woodstock, New York. After his death, he was elected into the National Academy of Design as an Associate Academician.

Guston's artworks are now held and exhibited in major museums worldwide, including the Art Institute of Chicago, the Detroit Institute of Arts, the Honolulu Museum of Art,[14] the Metropolitan Museum of Art, the Museum of Modern Art (MoMA), and the Tate Modern.[15][16] In May 2013, the sale of his 1958 abstract expressionist painting To Fellini for $25.8 million set the auction record for a Guston work.[17] This coincided with recent scholarly interest in exploring the periods he spent in Italy.[18]

The visual style of Guston's late works opened the door for many art trends of the early 21st century.[citation needed] In late 2015, after the retirement of longtime Guston dealer David McKee and closure of the McKee gallery, it was announced that the estate of Philip Guston would be represented by the Hauser & Wirth gallery. Beginning in 2013, a catalogue raisonné of the artist's work is being compiled by the Guston Foundation.

Philip Guston has entered popular culture and references can be found to some of his well-known pieces. In "Cat and Girl versus Contemporary Art", part of the Cat and Girl series, the author critiques the difficulty and purpose of finding the meaning behind art using Guston's iconic Head and Bottle painting.[1] 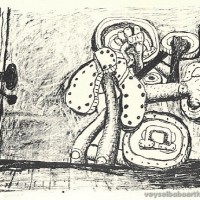 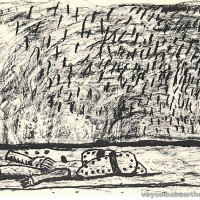 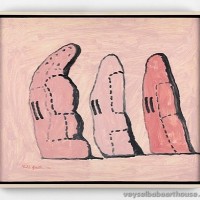 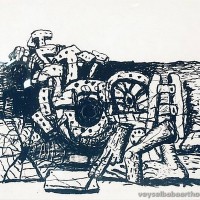 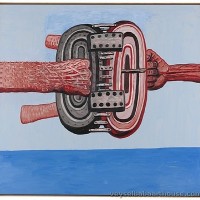 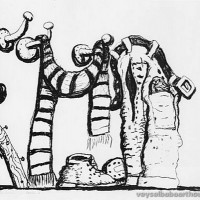 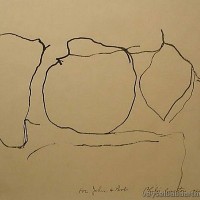 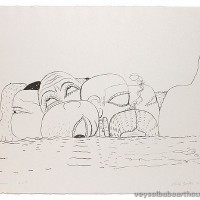