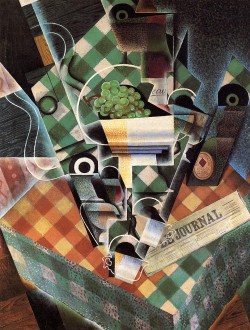 José Victoriano (Carmelo Carlos) González-Pérez (March 23, 1887 – May 11, 1927), better known as Juan Gris (Spanish: [ˈxwan ˈɡɾis]; French: [gʀi]), was a Spanish painter and sculptor born in Madrid who lived and worked in France most of his life. Closely connected to the innovative artistic genre Cubism, his works are among the movement's most distinctive.

Gris was born in Madrid. He later studied engineering at Madrid's School of Arts and Sciences. There, from 1902 to 1904, he contributed drawings to local periodicals. From 1904 to 1905, he studied painting with the academic artist José Moreno Carbonero. It was in 1905 that José Victoriano González adopted the more distinctive name Juan Gris.[1]

In 1906 he moved to Paris and became friends with Henri Matisse, Georges Braque and Fernand Léger. In Paris, Gris followed the lead of another friend and fellow countryman, Pablo Picasso. He submitted darkly humorous illustrations to journals such as the anarchist satirical magazine L'Assiette au Beurre, and also Le Rire, Le Charivari, and Le Cri de Paris.

Gris began to paint seriously in 1910 (when he gave up working as a satirical cartoonist), developing at this time a personal Cubist style. In A Life of Picasso, John Richardson writes that Jean Metzinger's 1911 work, Le goûter (Tea Time), persuaded Juan Gris of the importance of mathematics in painting.[2] Gris exhibited for the first time at the 1912 Salon des Indépendants (a painting entitled Hommage à Pablo Picasso).[3]

"He appears with two styles", writes art historian Peter Brooke, "In one of them a grid structure appears that is clearly reminiscent of the Goûter and of Metzinger's later work in 1912."[3] In the other, Brooke continues, "the grid is still present but the lines are not stated and their continuity is broken. Their presence is suggested by the heavy, often triangular, shading of the angles between them... Both styles are distinguished from the work of Picasso and Braque by their clear, rational and measurable quality."[3] Although Gris regarded Picasso as a teacher, Gertrude Stein wrote in The Autobiography of Alice B. Toklas that "Juan Gris was the only person whom Picasso wished away".[4] 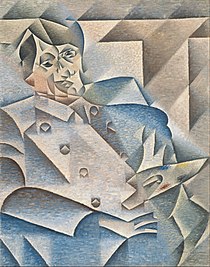 Portrait of Picasso, 1912, oil on canvas, the Art Institute of Chicago

In 1912 Gris exhibited at the Exposicío d'art cubista, galeríes J. Dalmau in Barcelona; the gallery Der Sturm in Berlin; the Salon de la Société Normande de Peinture Moderne in Rouen; and the Salon de la Section d'Or in Paris. Gris, in that same year, signed a contract that gave D.-H. Kahnweiler exclusive rights to his work.[5]

At first Gris painted in the style of Analytical Cubism, a term he himself later coined,[6] but after 1913 he began his conversion to Synthetic Cubism, of which he became a steadfast interpreter, with extensive use of papier collé or, collage. Unlike Picasso and Braque, whose Cubist works were practically monochromatic, Gris painted with bright harmonious colors in daring, novel combinations in the manner of his friend Matisse. Gris exhibited with the painters of the Puteaux Group in the Salon de la Section d'Or in 1912.[7] His preference for clarity and order influenced the Purist style of Amédée Ozenfant and Charles Edouard Jeanneret (Le Corbusier), and made Gris an important exemplar of the post-war "return to order" movement.[8] In 1915 he was painted by his friend, Amedeo Modigliani. 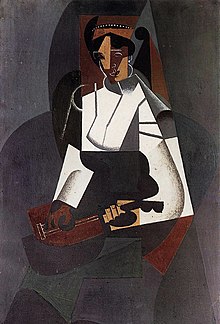 Gris's works from late 1916 through 1917 exhibit a greater simplification of geometric structure, a blurring of the distinction between objects and setting, between subject matter and background. The oblique overlapping planar constructions, tending away from equilibrium, can best be seen in Woman with Mandolin, after Corot (September 1916) and in its epilogue, Portrait of Josette Gris (October 1916; Museo Reina Sofia).[9]

The clear-cut underlying geometric framework of these works seemingly controls the finer elements of the compositions; the constituent components, including the small planes of the faces, become part of the unified whole. Though Gris certainly had planned the representation of his chosen subject matter, the abstract armature serves as the starting point. The geometric structure of Juan Gris's Crystal period is already palpable in Still Life before an Open Window, Place Ravignan (June 1915; Philadelphia Museum of Art). The overlapping elemental planar structure of the composition serves as a foundation to flatten the individual elements onto a unifying surface, foretelling the shape of things to come. In 1919 and particularly 1920, artists and critics began to write conspicuously about this 'synthetic' approach, and to assert its importance in the overall scheme of advanced Cubism.[9]

In 1924, he designed ballet sets and costumes for Sergei Diaghilev and the famous Ballets Russes.

After October 1925, Gris was frequently ill with bouts of uremia and cardiac problems. He died of renal failure[10] in Boulogne-sur-Seine (Paris) on May 11, 1927, at the age of 40, leaving a wife, Josette, and a son, Georges. 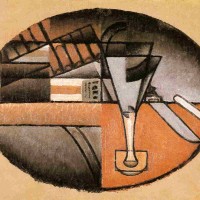 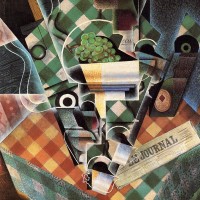 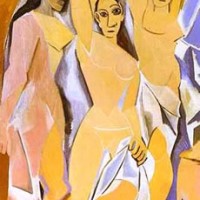 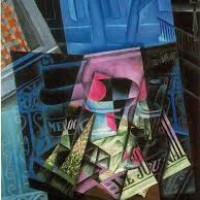 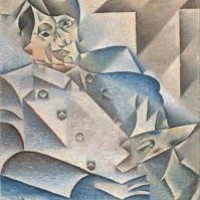 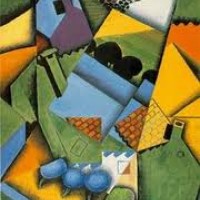 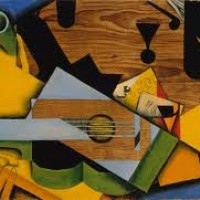 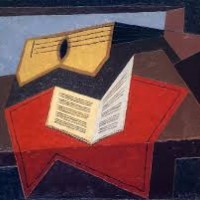 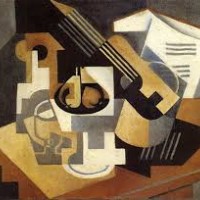 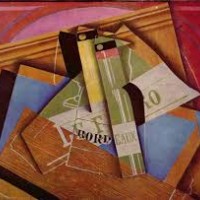 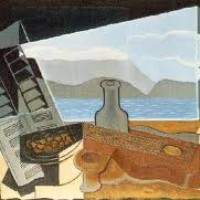 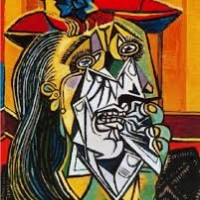 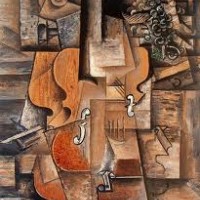 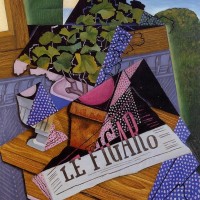