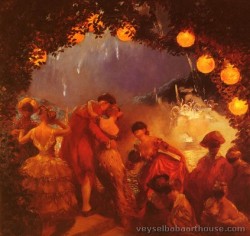 The Arbor, a frequently reproduced painting from c.1906 Walters Museum)

His family originally came from Normandy. He was born in Saint-Cloud. His passion for art began at a very early age and he finally persuaded his parents to give him drawing lessons, which he took for ten years from a local instructor at the rate of three Francs per month.[1] His lessons had to be cancelled at the start of the Franco-Prussian War, when his family returned to Normandy to ensure their safety.[2] This would be all the formal art training he ever received.

Nevertheless, in 1875 he was able to make his début at the Salon with a bas-relief portrait medallion of François Jules Edmond Got, an actor at the Comédie-Française, and several etchings. Between 1877 and 1879, he made the acquaintance of Edgar Degas and Edouard Manet, who he met with frequently at the Café de la Nouvelle Athènes. It was there that he was introduced to Émile Zola, some of whose works he would later illustrate.[2] 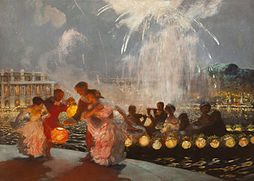 Beginning in 1880, he produced dark toned works of social realism in the style of the Dutch Masters. His first painting was shown at the Salon the following year. Félix Bracquemond, a friend and associate, suggested that he might be more successful if he brightened his color palette and chose different subjects, recommending Antoine Watteau and François Boucher as models.[1] He also painted landscapes and portraits in the style of Puvis de Chavannes, which brought him his first major successes at the Société Nationale des Beaux-Arts. In 1891, he burned most of his earlier paintings.[2]

Later, he received commissions to provide decorations for the Town Hall in Saint-Cloud and the reception hall at the Ministry of Justice (Hôtel de Bourvallais), although the latter were never installed there and are now at the Palais du Luxembourg. In 1900, he was one of several artists who provided decorations for Le Train Bleu, a famous restaurant near the Gare de Lyon.[1]

In his later years, he divided his time between his studio in Saint-Cloud and his family's properties in Champsecret. In 1909, he was named an Officer in the Legion d'Honneur. In 1912, he completed his last major decorative project at "Villa Arnaga", Edmond Rostand's home in Cambo-les-Bains, which is now a museum. He died in Paris while painting.

Among the works he illustrated are The Dram and L'Assommoir by Zola, Aux flancs du Vase by Albert Samain, and Poèmes by Henri de Régnier. 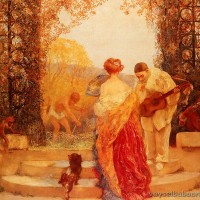 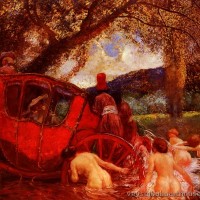 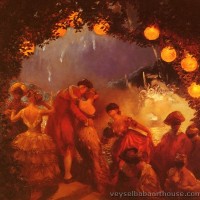 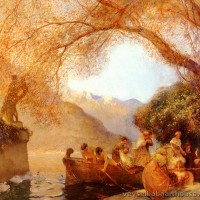 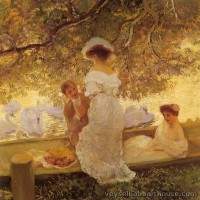 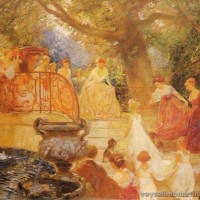