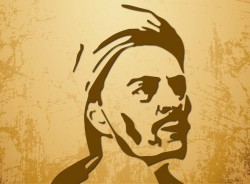 Yunus Emre (Turkish pronunciation: [juˈnus emˈɾe]) (1238–1320) was a Turkish poet and Sufi mystic who greatly influenced Anatolian culture.[1] His name, Yunus, is equivalent to the English name Jonas. He wrote in the Old Anatolian Turkish language, an early stage of modern Turkish. The UNESCO General Conference unanimously passed a resolution declaring 1991, the 750th anniversary of the poet's birth, "The International Yunus Emre Year".[2] He is a Bektashi dervish and eren.

Yunus Emre has exercised immense influence on Turkish literature, from his own day until the present. Because Yunus Emre is, after Ahmet Yesevi and Sultan Walad, one of the first known poets to have composed works in the spoken Turkish of his own age and region rather than in Persian or Arabic. His diction remains very close to the popular speech of his contemporaries in Central and Western Anatolia. This is also the language of a number of anonymous folk-poets, folk-songs, fairy tales, riddles (tekerlemeler), and proverbs.

Like the Oghuz Book of Dede Korkut, an older and anonymous Central Asian epic, the Turkish folklore that inspired Yunus Emre in his occasional use of tekerlemeler as a poetic device had been handed down orally to him and his contemporaries. This strictly oral tradition continued for a long while.[3] Following the Mongolian invasion of Anatolia facilitated by the Sultanate of Rûm's defeat at the 1243 Battle of Köse Dağ, Islamic mystic literature thrived in Anatolia, and Yunus Emre became one of its most distinguished poets. Poems of Sultan Yunus Emre — despite being fairly simple on the surface — evidence his skill in describing quite abstruse mystical concepts in a clear way. He remains a popular figure in a number of countries, stretching from Azerbaijan to the Balkans, with seven different and widely dispersed localities disputing the privilege of having his tomb within their boundaries.

His poems, written in the tradition of Anatolian folk poetry, mainly concern divine love as well as human destiny: