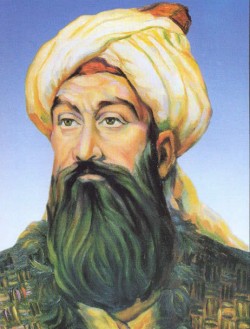 Pir Sultan Abdal (ca. 1480–1550) was a Turkish Alevi poet, whose direct and clear language as well as the richness of his imagination and the beauty of his verses led him to become loved among the Turkish people. Pir Sultan Abdal reflected the social, cultural and religious life of the people; he was a humanist, and wrote about resistance, love, peace, death and God. He was also rebellious against authoritarian rule which led him into problems with the Ottoman establishment.

Pir Sultan Abdal's ethnic origin is Turkish, his poetry was in the Turkish language and he originated from Sivas, which is mostly populated by ethnic Turks. Although Some researchers believe "Pir Sultan" wasn't just the one in Sivas, who has rebelled against the state and hanged for his religious convictions by Hızır Paşa's orders. Most of the information about him and his era we find in his verses, which reveal him as cultivated well educated and intellectual. Pir Sultan Abdal, was an Alevi, his early work is dedicated to lyrical and pastoral themes and to the gnostic approach he had adopted. He criticized some Ottoman governors, Hizir Pasha in particular who ruled the region and his unjust officers.

His verses and calls for the rights and freedoms of the peasant folk soon attracted a lot of support among the masses who supported these ideals. As a result he was hanged by Hizir Pasha.

But the tradition of his poetry and his struggle have remained alive till this day. His poetry was sung accompanied by the baglama, or saz, throughout the ages by folk singers. Today in modern Turkey the Baglama is one of the most loved instruments of the people and is extremely popular and widely used.

Many poets acquired his name to keep 'Pir Sultan's voice' alive. According to literary historians, there were at least six other poets bearing the same name.

Şu meydanda serilidir postumuz (We've spread our prayer hide all over this place)
Çok şükür Mevlâ'ya gördük dostumuz (We saw our dearest one to Holy God in grace)
Bir gün kara toprak bürür üstümüz (One day, all of us will come into the earth's embrace)
Çürütür hey benli dilber çürütür. (We'll putrefy, my fair one, we'll putrefy.)

Kendisi okur da kendisi yazar (God Himself reads the fate, Himself he scribes)
Hak hilâl kaşına eylemiş nazar (He closed the crescent lashes of her beautiful eyes)
Senin akranların cennette gezer (Your peers are walking now with you in Paradise)
Hürüdür hey benli dilber hürüdür. (houris they are, my fair one, houris, fair my.)

Hangi dinde isen ona tapayım (Whatever your creed be, I will adore it and pray)
Yarın mahşer günü bile kopayım (To be awakened together with you on Judgement Day)
Eğil bir yol ak gerdandan öpeyim (Rise up once more to kiss thy fair throat that I may)
Beri dur hey benli dilber beri dur. (Don't pass for one more trice, my fair, don't pass by.)

Pîr Sultan Abdal'ım başından başlar, (I am Pir Sultan Abdal, I begin at the beginning)
İyisini yer de kemini taşlar, (I feed my soul with the best and despise the worst)
Bin çiçekten bir kovana bal işler (I'll pool honey from thousand blooms to one comb till it bursts)
Arıdır hey benli dilber arıdır. (I am the bee, my fair one, the bee am I.)[1]

Pir Sultan followed the traditional style of folk literature. The outstanding characteristic of his poems, the use of vernacular language, keen and clear style still prevail in folkloric poetry. He also had a great influence on the poets of modern Turkey in the republican era and is today a beloved figure.