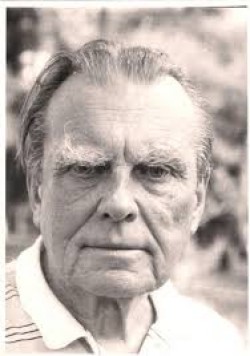 listen); 30 June 1911 – 14 August 2004) was a Polish[1][2] poet, prose writer, translator and diplomat. His World War II-era sequence The World is a collection of twenty "naïve" poems. Following the war, he served as Polish cultural attaché in Paris and Washington, D.C., then in 1951 defected to the West. His nonfiction book The Captive Mind (1953) became a classic of anti-Stalinism. From 1961 to 1998 he was a professor of Slavic Languages and Literatures at the University of California, Berkeley. He became a U.S. citizen in 1970.[3] In 1978 he was awarded the Neustadt International Prize for Literature, and in 1980 the Nobel Prize in Literature. In 1999 he was named a Puterbaugh Fellow.[4] After the fall of the Iron Curtain, he divided his time between Berkeley, California, and Kraków, Poland.

Czesław Miłosz was born on June 30, 1911, in the village of Szetejnie (Lithuanian: Šeteniai), Kovno Governorate, Russian Empire (now Kėdainiai district, Kaunas County, Lithuania) on the border between two Lithuanian historical regions, Samogitia and Aukštaitija, in central Lithuania. As the son of Aleksander Miłosz (d.1959), a Polish civil engineer of Lithuanian origin,[3][5][6][7][8] and Weronika, née Kunat (1887-1945), descendant of the Syruć noble family (she was a granddaughter of Szymon Syruć),[9] Miłosz was fluent in Polish, Lithuanian, Russian, English, and French.[10] His brother, Andrzej Miłosz (1917–2002), a Polish journalist, translator of literature and of film subtitles into Polish, was a documentary-film producer who created Polish documentaries about his brother.

Miłosz was raised Catholic in rural Lithuania and emphasized his identity with the multi-ethnic Grand Duchy of Lithuania, a stance that led to ongoing controversies. He refused to categorically identify himself as either a Pole or a Lithuanian.[11] He said of himself: "I am a Lithuanian to whom it was not given to be a Lithuanian",[12] and "My family in the sixteenth century already spoke Polish, just as many families in Finland spoke Swedish and in Ireland English, so I am a Polish not a Lithuanian poet. But the landscapes and perhaps the spirits of Lithuania have never abandoned me".[13] Miłosz memorialised his Lithuanian childhood in a 1955 novel The Issa Valley and in the 1959 memoir Native Realm.[14] He employed a Lithuanian-language tutor late in life to improve the skills acquired in his childhood. His explanation was that it might be the language spoken in heaven.[15] He often is quoted as having said, "Language is the only homeland."

In his youth, Miłosz came to adopt, as he put it, a "scientific, atheistic position mostly", although he was later to return to the Catholic faith.[16] After graduation from Sigismund Augustus Gymnasium in Vilnius, he studied law at Stefan Batory University. In 1931 he traveled to Paris, where he was influenced by his distant cousin Oscar Milosz, a French poet of Lithuanian descent and a Swedenborgian. In 1931, he formed the poetic group Żagary with the young poets Jerzy Zagórski, Teodor Bujnicki, Aleksander Rymkiewicz, Jerzy Putrament and Józef Maśliński.[17] Miłosz's first volume of poetry was published in 1934. After receiving his law degree that year, he again spent a year in Paris on a fellowship. Upon returning, he worked as a commentator at Radio Wilno, but was dismissed, an action described as stemming from either his leftist views or for views overly sympathetic to Lithuania.[12][18] Miłosz wrote all his poetry, fiction and essays in Polish and translated the Old Testament Psalms into Polish.

Miłosz spent World War II in Warsaw, under Nazi Germany's "General Government". Here he attended underground lectures by Polish philosopher and historian of philosophy and aesthetics Władysław Tatarkiewicz. He did not join the Polish Home Army's resistance or participate in the Warsaw Uprising, partly from an instinct for self-preservation and partly because he saw its leadership as right-wing and dictatorial.[19] According to Irena Grudzińska-Gross, he saw the uprising as a "doomed military effort" and lacked "patriotic elation" — he called it "a blameworthy, lightheaded enterprise."[19][20]

After World War II, Miłosz served as cultural attaché of the newly formed People's Republic of Poland in and Washington, D.C. and Paris. For this he was criticized in some emigre circles. Conversely, he was attacked and censored in Poland when, in 1951, he defected and obtained political asylum in France. He described his life in Paris as difficult — there was still considerable intellectual sympathy for Communism. Albert Camus was supportive, but Pablo Neruda denounced him as "The Man Who Ran Away."[21] His attempts to seek asylum in the US were denied for several years, due to the climate of McCarthyism.[22]

Miłosz's 1953 book, The Captive Mind, is a study about how intellectuals behave under a repressive regime. Miłosz observed that those who became dissidents were not necessarily those with the strongest minds but rather those with the weakest stomachs; the mind can rationalize anything, he said, but the stomach can take only so much. Throughout the Cold War, the book was often cited by U.S. conservative commentators such as William F. Buckley, Jr., and it has been a staple in political science courses on totalitarianism.

In 1953 he received the Prix Littéraire Européen (European Literary Prize).

Righteous Among the Nations

During the Nazi occupation of Poland, Miłosz was active in the work of Organizacja Socjalistyczno-Niepodległościowa "Wolność" ("The 'Freedom' Socialist Pro-Independence Organisation"). In his activity with "Wolność", Miłosz gave aid to Warsaw Jews. His brother Andrzej Miłosz was also active in helping Jews in Nazi-occupied Poland, and in 1943 Andrzej transported the Polish Jew Seweryn Tross and his wife from Vilnius to Warsaw. Czesław Miłosz took in the Trosses, found them a hiding place, and supported them financially. The Trosses ultimately died during the Warsaw Uprising. Miłosz helped at least three other Jews — Felicja Wołkomińska and her brother and sister. For these efforts, Miłosz received the medal of the Righteous Among the Nations in Yad Vashem, Israel in 1989.[23][24]

Life in the United States 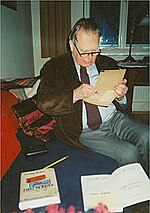 In 1960 Miłosz emigrated to the United States, and in 1970 he became a U.S. citizen. In 1961 he began a professorship in the Department of Slavic Languages and Literatures at the University of California, Berkeley.[25]

In 1978 he received the Neustadt International Prize for Literature.[25] He retired the same year but continued teaching at Berkeley. His attitude about living in Berkeley is sensitively portrayed in his poem, "A Magic Mountain," contained in a collection of translated poems, Bells in Winter (Ecco Press, 1985).

In 1980 Miłosz received the Nobel Prize in Literature. Since his works had been banned in Poland by the communist government, this was the first time that many Poles became aware of him.[26] After the Iron Curtain fell, he was able to return to Poland, at first to visit, later to live part-time in Kraków. He divided his time between his home in Berkeley and an apartment in Kraków.

In a 1994 interview, Miłosz spoke of the difficulty of writing religious poetry in a largely post-religious world. He reported a recent conversation with his compatriot Pope John Paul II; the latter, commenting upon some of Miłosz's work, in particular Six Lectures in Verse, said to him: "You make one step forward, one step back." The poet answered: "Holy Father, how in the twentieth century can one write religious poetry differently?" The Pope smiled.[27] A few years later, in 2000, Miłosz dedicated a rather straightforward ode to John Paul II, on the occasion of the pope's eightieth birthday.[28] 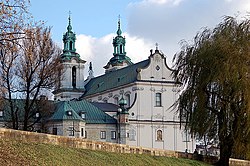 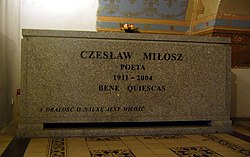 Czesław Miłosz died on 14 August 2004 at his Kraków home, aged 93. He was buried in Kraków's Skałka Roman Catholic Church, becoming one of the last to be commemorated there.[29] Protesters threatened to disrupt the proceedings on the grounds that he was anti-Polish, anti-Catholic, and had signed a petition supporting gay and lesbian freedom of speech and assembly.[30] Pope John Paul II, along with Miłosz's confessor, issued public messages to the effect that Miłosz had been receiving the sacraments, which quelled the protest.[31]

Miłosz is honoured at Israel's Yad Vashem memorial to the Holocaust, as one of the "Righteous among the Nations". A poem by Miłosz appears on a Gdańsk memorial to protesting shipyard workers who had been killed by government security forces in 1970. His books and poems have been translated by many hands, including Jane Zielonko, Peter Dale Scott, Robert Pinsky, and Robert Hass.

In November 2011, Yale University hosted a conference on Miłosz's relationship with America.[32] The Beinecke Rare Book and Manuscript Library, which holds the Czesław Miłosz Papers,[33] also hosted an exhibition celebrating Miłosz's life and work, entitled Exile as Destiny: Czeslaw Miłosz and America. 2011 was deemed "The Miłosz Year," which culminated in a large conference in Kraków (May 9–15, 2011).