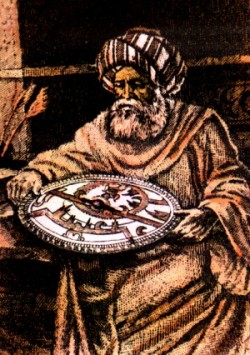 Little is known about al-Battānī's life beside that he was born in Harran near Urfa, in Upper Mesopotamia, which is now in Turkey, and his father was a famous maker of scientific instruments.[2] His epithet aṣ-Ṣabi’ suggests that among his ancestry were members of the Sabian sect; however, his full name indicates that he was Muslim.[3] Some western historians state that he is of noble origin, like an Arab prince,[4] but traditional Arabic biographers make no mention of this.[2] He lived and worked in Raqqa, a city in north central Syria.

One of al-Battānī's best-known achievements in astronomy was the determination of the solar year as being 365 days, 5 hours, 46 minutes and 24 seconds which is only 2 minutes and 22 seconds off.[3]

He was able to correct some of Ptolemy's results and compiled new tables of the Sun and Moon, long accepted as authoritative.[4]Some of his measurements were even more accurate than ones taken by Copernicus many centuries later. Researchers have ascribed this phenomenon to al-Battānī being in a geographical location that is closer to the southern latitude, which might have been more favorable for such observations.[3]

Al-Battānī discovered that the direction of the Sun's apogee, as recorded by Ptolemy, was changing.[5] (In modern heliocentric terms this is due to the changing direction of the eccentricity vector of the Earth's orbit). He also introduced, probably independently of the 5th century Indian astronomer Aryabhata, the use of sines in calculation, and partially that of tangents.[4] He also calculated the values for the precession of the equinoxes (54.5" per year, or 1° in 66 years) and the obliquity of the ecliptic (23° 35').[3] He used a uniform rate for precession in his tables, choosing not to adopt the theory of trepidation attributed to his colleague Thabit ibn Qurra.

Al-Battānī's work is considered instrumental in the development of science and astronomy.[3] Copernicus quoted him in the book that initiated the Copernican Revolution, the De Revolutionibus Orbium Coelestium, where his name is mentioned no fewer than 23 times,[6] and also mentioned in the Commentariolus.[7] Al-Battānī was frequently quoted by Tycho Brahe, Riccioli, among others. Kepler and Galileo showed interest in some of his observations,[2] and his data continues to be used in geophysics.[8]

In mathematics, al-Battānī produced a number of trigonometrical relationships:

He also solved the equation sin x = a cos x discovering the formula:

He gives other trigonometric formulae for right angled triangles such as:[3]

Al-Battānī used al-Marwazi's idea of tangents ("shadows") to develop equations for calculating tangents and cotangents, compiling tables of them. He also discovered the reciprocal functions of secant and cosecant, and produced the first table of cosecants, which he referred to as a "table of shadows" (in reference to the shadow of a gnomon), for each degree from 1° to 90°.[9]

Al-Battānī's major work is Kitāb az-Zīj ("Book of Astronomical Tables"). It was largely based on Ptolemy's theory, and other Greco-Syriac sources, while showing little Indian or Persian influence.[2][10] In his zij, he provided descriptions of a quadrant instrument.[11]

This book went through many translations to Latin and Spanish, including a Latin translation as De Motu Stellarum by Plato of Tivoli in 1116, which was later reprinted with annotations by Regiomontanus.[4] A reprint appeared at Bologna in 1645. The original MS. is preserved at the Vatican; and the Escorial library possesses in MS. a treatise of some value by him on astronomical chronology.[4]