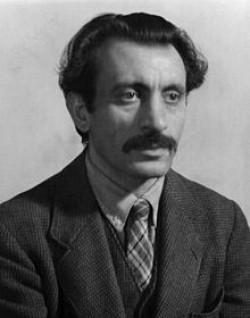 Arshile Gorky (/ˌɑːrʃiːl ˈɡɔːrkiː/; born Vostanik Manoug Adoian, Armenian: Ոստանիկ Մանուկ Ատոյեան; April 15, 1904 – July 21, 1948) was an Armenian-American painter, who had a seminal influence on Abstract Expressionism. He spent most his life as a national of the United States. Along with Mark Rothko, Jackson Pollock and Willem de Kooning, Gorky has been hailed as one of the most powerful American painters of the 20th century. As such, his works were often speculated to have been informed by the suffering and loss he experienced in the Armenian Genocide.[1]

Gorky was born on April 15, 1904, in the village of Khorgom, situated on the shores of Lake Van in the Ottoman Empire. In later years he was vague about his date of birth, changing it from year to year. In 1908 his father emigrated to America to avoid the draft, leaving his family behind in the town of Van.[2]

In 1915, Gorky fled Lake Van during the Armenian Genocide and escaped with his mother and his three sisters into Russian-controlled territory. In the aftermath of the genocide, Gorky's mother died of starvation in Yerevan in 1919. Arriving in America in 1920, the 16-year-old Gorky was reunited with his father, but they never grew close.

In the process of reinventing his identity, he changed his name to "Arshile Gorky", claiming to be a Georgian noble[3] (taking the Georgian name Arshile/Archil), and even telling people he was a relative of the Russian writer Maxim Gorky.[4]

In 1922, Gorky enrolled in the New School of Design in Boston, eventually becoming a part-time instructor. During the early 1920s he was influenced by Impressionism, although later in the decade he produced works that were more postimpressionist. During this time he was living in New York and was influenced by Paul Cézanne. In 1925 he was asked by Edmund Greacen of the Grand Central Art Galleries to teach at the Grand Central School of Art; Gorky accepted and remained with them until 1931.[5] In 1927, Gorky met Ethel Kremer Schwabacher and developed a lifelong friendship. Schwabacher was his first biographer. Gorky said:

The stuff of thought is the seed of the artist. Dreams form the bristles of the artist's brush. As the eye functions as the brain's sentry, I communicate my innermost perceptions through the art, my worldview.[6]

In 1931, Gorky sent a group of works ranging in price from $100 to $450 to the Downtown Gallery in New York . (The artist's name was spelled "Archele Gorki" in the gallery's records. Most of Gorky's works from this period were unsigned.) The exact nature of their relationship is unknown. Mrs. John D. Rockefeller (Abby Aldrich Rockefeller) purchased from the gallery a Cézannesque still life by Gorky titled Fruit. Gorky may have been introduced to the gallery owner by Stuart Davis who regularly exhibited there.

In 1933, Arshile Gorky became one of the first artists employed by the Works Progress Administration Federal Art Project. This later came to include such artists as Alice Neel, Lee Krasner, Jackson Pollock, Diego Rivera and Mark Rothko.

Notable paintings from this time include Landscape in the Manner of Cézanne (1927) and Landscape, Staten Island (1927–1928). At the close of the 1920s and into the 1930s he experimented with cubism, eventually moving to surrealism. The painting illustrated above, The Artist and His Mother, (ca. 1926–1936) is a memorable, moving and innovative portrait. His The Artist and His Mother paintings are based on a childhood photograph taken in Van in which he is depicted standing beside his mother. Gorky made two versions; the other is in the National Gallery of Art Washington, DC.. The painting has been likened to Ingres for simplicity of line and smoothness, to Egyptian Funerary art for pose, to Cézanne for flat planar composition, to Picasso for form and color.[7]

Nighttime, Enigma, Nostalgia (1930–1934) are the series of complex works that characterize this phase of his painting. The canvas Portrait of Master Bill appears to depict Gorky's friend, Willem de Kooning. De Kooning said: "I met a lot of artists — but then I met Gorky... He had an extraordinary gift for hitting the nail on the head; remarkable. So I immediately attached myself to him and we became very good friends. It was nice to be foreigners meeting in some new place." [8][9][10] However recent publications contradict the claim that the painting is of de Kooning but is actually a portrait of a Swedish carpenter Gorky called Master Bill who did some work for him in exchange for Gorky giving him art lessons.[11] 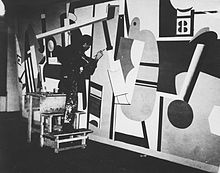 Arshile Gorky working on Activities on the field, one of the panels for his mural Aviation at Newark Airport, for the Federal Art Project, 1936

When Gorky showed his new work to André Breton in the 1940s, after seeing the new paintings and in particular The Liver is the Cock's Comb, Breton declared the painting to be "one of the most important paintings made in America" and he stated that Gorky was a Surrealist, which was Breton's highest compliment.[12] The painting was shown in the Surrealists' final show at the Galérie Maeght in Paris in 1947.[13]

Michael Auping, a curator at the Modern Art Museum in Fort Worth, saw in the work a "taut sexual drama" combined with nostalgic allusions to Gorky's Armenian past.[14] The work in 1944 shows his emergence in the 1940s from the influence of Cézanne and Picasso into his own style, and is perhaps his greatest work.[15] It is over six feet high and eight feet wide, depicting "an abstract landscape filled with watery plumes of semi-transparent color that coalesce around spiky, thorn like shapes, painted in thin, sharp black lines, as if to suggest beaks and claws."[15]

Artist Corinne Michelle West was Gorky's muse and probably his lover, although she refused to marry him when he proposed several times.[16]

In 1941, Gorky met and married Agnes Magruder (1921–2013) daughter of Admiral John H. Magruder. He soon nicknamed her "Mougouch", an Armenian term of endearment. They had two daughters, Maro and Yalda (renamed Natasha some months later).

From 1946, Gorky suffered a series of crises: his studio barn burned down, he underwent a colostomy for cancer, and Mougouch had an affair with Roberto Matta. In 1948, Gorky's neck was broken and his painting arm temporarily paralyzed in a car accident, and his wife left him, taking their children with her. She was later married to British writer Xan Fielding.[17] 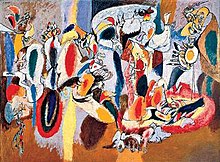 Gorky's contributions to American and world art are difficult to overestimate. His work as lyrical abstraction[18][19][20][21][22] was a "new language.[18] He "lit the way for two generations of American artists".[18] The painterly spontaneity of mature works like The Liver is the Cock's Comb (1944), One Year the Milkweed (1944), and The Betrothal II (1947) immediately prefigured Abstract expressionism, and leaders in the New York School have acknowledged Gorky's considerable influence.

But his oeuvre is a phenomenal achievement in its own right, synthesizing Surrealism and the sensuous color and painterliness of the School of Paris with his own highly personal formal vocabulary. His paintings and drawings hang in every major American museum including the National Gallery of Art, the Museum of Modern Art, the Art Institute of Chicago, the Metropolitan and the Whitney Museum of American Art in New York (which maintains the Gorky Archive), and in many worldwide, including the Tate in London.

A number of English translations of letters allegedly written by Gorky in Armenian to his sisters are now considered to be fakes produced by Karlen Mooradian, a nephew of Gorky, in the late 1960s and early 1970s (especially those expressing nationalistic sentiments or imparting specific meanings to his paintings). The letters often described moods of melancholy, and expressed loneliness and emptiness, nostalgia for his country, while bitterly and vividly recalling the circumstances of his mother's death. The contents of the fake letters heavily influenced the authors of books written about Gorky and his art during the 1970s and 1980s.

In June 2005, the family of the artist established the Arshile Gorky Foundation, a not-for-profit corporation formed to further the public’s appreciation and understanding of the life and artistic achievements of Arshile Gorky. The foundation is working on a catalogue raisonné of the artist's entire body of work. In October 2009, the foundation relaunched its website to provide accurate information on the artist, including a biography, bibliography, exhibition history, and list of archival sources.[24]

In October 2009 the Philadelphia Museum of Art held a major Arshile Gorky exhibition: Arshile Gorky: A Retrospective [25][26] On June 6, 2010, an exhibit of the same name opened at the Museum of Contemporary Art (MOCA) in Los Angeles.