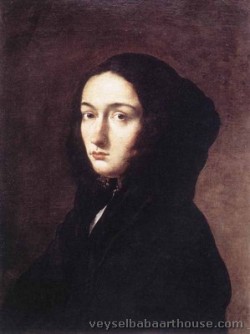 Salvator Rosa (June 20 or July 21, 1615 – March 15, 1673) was an Italian Baroque painter, poet, and printmaker, who was active in Naples, Rome, and Florence. As a painter, he is best known as "unorthodox and extravagant" as well as being a "perpetual rebel"[1]and a proto-Romantic.

Rosa was born in Arenella, at that time in the outskirts of Naples, on either June 20 or July 21, 1615. His mother was Giulia Greca Rosa, a member of one of the Greek families of Sicily. His father, Vito Antonio de Rosa, a land surveyor, urged his son to become a lawyer or a priest, and entered him into the convent of the Somaschi Fathers. Yet Salvator showed a preference for the arts and secretly worked with his maternal uncle Paolo Greco to learn about painting. He soon transferred himself to the tutelage of his brother-in-law Francesco Fracanzano, a pupil of Ribera, and afterward to either Aniello Falcone,[1] a contemporary of Domenico Gargiulo,[2] or to Ribera. Some sources claim he spent time living with roving bandits.[3] At the age of seventeen, his father died; his mother was destitute with at least five children and Salvator found himself without financial support and the head of a household looking to him for support. 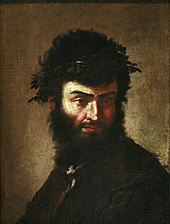 He continued apprenticeship with Falcone, helping him complete his battlepiece canvases. In that studio, it is said that Lanfranco took notice of his work, and advised him to relocate to Rome, where he stayed from 1634–36.

Returning to Naples, he began painting haunting landscapes, overgrown with vegetation, or jagged beaches, mountains, and caves. Rosa was among the first to paint "romantic" landscapes, with a special turn for scenes of picturesque, often turbulent and rugged scenes peopled with shepherds, brigands, seamen, soldiers. These early landscapes were sold cheaply through private dealers.

He returned to Rome in 1638–39, where he was housed by Cardinal Francesco Maria Brancaccio, bishop of Viterbo. For the Chiesa Santa Maria della Morte in Viterbo, Rosa painted his first and one of his few altarpieces, the Incredulity of Thomas.

While Rosa had a facile genius at painting, he pursued a wide variety of arts: music, poetry, writing, etching, and acting. In Rome, he befriended Pietro Testa and Claude Lorrain. During a Roman carnival play he wrote and acted in a masque, in which his character bustled about Rome distributing satirical prescriptions for diseases of the body and more particularly, of the mind. In costume, he inveighed against the farcical comedies acted in the Trastevere under the direction of Bernini.

While his plays were successful, this activity also gained him powerful enemies among patrons and artists, including Bernini himself, in Rome. By late 1639, he had to relocate to Florence, where he stayed for eight years. In part, he had been invited by a Cardinal Gian Carlo de' Medici.[clarification needed] Once there, Rosa sponsored a combination of studio and salon of poets, playwrights, and painters—the so-called Accademia dei Percossi (Academy of the Stricken). To the rigid art milieu of Florence, he introduced his canvases of wild landscapes; while influential, he gathered few true pupils. Another painter poet, Lorenzo Lippi, shared with Rosa the hospitality of the cardinal and the same circle of friends. Lippi encouraged him to proceed with the poem Il Malmantile Racquistato. He was well acquainted also with Ugo and Giulio Maffei, and was housed with them in Volterra, where he wrote four satires Music, Poetry, Painting, and War. About the same time he painted his own portrait, now in the National Gallery, London.

Landscape with Tobit and the Angel, circa 1670 (Musée des Beaux-Arts de Strasbourg)

In 1646 he returned to Naples, and appears to have sympathized with the 1648 insurrection of Masaniello, as a passage in one of his satires suggests. Whether he participated in the insurrection is unknown. It is alleged that Rosa, along with other painters—Coppola, Paolo Porpora, Domenico Gargiulo, Pietro del Po, Marzio Masturzo, the two Vaccari and Cadogna[clarification needed]—all under the captaincy of Aniello Falcone, formed the Compagnia della Morte, whose mission it was to hunt down Spaniards in the streets, not sparing even those who had sought religious asylum. He painted a portrait of Masaniello—probably from reminiscence rather than life. On the approach of Don Juan de Austria, the blood-stained Compagnia dispersed.

Other tales recount that from there he escaped and joined with brigands in the Abruzzi. Although this incident cannot be conveniently dove-tailed into known dates of his career, in 1846 a famous romantic ballet about this story titled Catarina was produced in London by the choreographer Jules Perrot and composer Cesare Pugni). 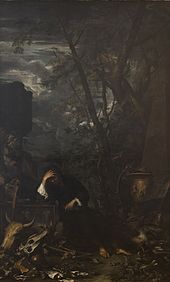 He returned to stay in Rome in 1649. Here he increasingly focused on large scale paintings, tackling themes and stories unusual for seventeenth-century painters. These included Democritus amid the Tombs, The Death of Socrates, Regulus in the Spiked Cask (these two are now in England), Justice Quitting the Earth and the Wheel of Fortune. This last work, with its implication that too often foolish artists received rewards that did not match their talent, raised a storm of controversy. Rosa, endeavouring at conciliation, published a description of its meaning (probably softened down not a little from the real facts); nonetheless he was nearly arrested. It was about this time that Rosa wrote his satire named Babylon.

His criticisms of Roman art culture won him several enemies. An allegation arose that his published satires were not his own, but stolen. Rosa indignantly denied the charges, but one must admit that the satires deal so extensively and with such ready manipulation of classical names, allusions and anecdotes, that one is rather at a loss to fix upon the period of his busy career at which Rosa could possibly have imbued his mind with such a multitude of semi-erudite details. It may perhaps be legitimate to assume literary friends in Florence and Volterra coached him about the topic of his satires, the compositions of which remained nonetheless his own. To confute his detractors he now wrote the last of the series, entitled Envy.

Among the pictures of his last years were the admired Battlepiece and Saul and the Witch of Endor (latter perhaps his final work) now in the Musée du Louvre, painted in 40 days, full of longdrawn carnage, with ships burning in the offing; Polycrates and the Fishermen; and the Oath of Catiline (Palazzo Pitti).

While occupied with a series of satirical portraits, to be closed by one of himself, Rosa was assailed by dropsy. He died a half year later. In his last moments he married a Florentine named Lucrezia, who had borne him two sons, one of them surviving him, and he died in a contrite frame of mind. His tomb is in Santa Maria degli Angeli e dei Martiri, where a portrait of him has been set up. Salvator Rosa, after struggles of his early youth, had successfully earned a handsome fortune.

He was a significant etcher, with a highly popular and influential series of small prints of soldiers, and a number of larger and very ambitious subjects.

Among his pupils were Evangelista Martinotti of Monferrato and his brother Francesco. Another pupil was Ascanio della Penna of Perugia.[4] 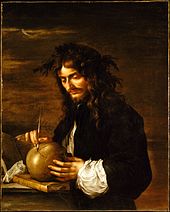 Rosa's most lasting influence was on the later development of romantic and picturesque traditions within painting. As Wittkower states, it is in his landscapes, not his grand historical or religious dramas, that Rosa truly expresses his innovative abilities most graphically. Rosa himself may have dismissed them as frivolous capricci in comparison to his other themes, but these academically conventional canvases often restrained his rebellious streak. In general, in landscapes he avoided the idyllic and pastoral calm countrysides of Claude Lorrain and Paul Bril, and created brooding, melancholic fantasies, awash in ruins and brigands. By the eighteenth century, the contrasts between Rosa and artists such as Claude was much remarked upon. A 1748 poem by James Thompson, "The Castle of Indolence", illustrated this: "Whate'er Lorraine light touched with softening hue/ Or savage Rosa dashed, or learned Poussin drew".[5] He influenced Gaspard Dughet's landscape style.

A recent exhibit of Turner's work, at the Prado museum in Madrid, notes the influence Rosa had on Turner, in his landscapes. In fact it is reported that Turner consciously wanted to be associated with the work of Rosa.[citation needed] Another exhibition of Rosa's work, held at London's Dulwich Picture Gallery in 2010, emphasised the strangeness of Rosa's painting and themes, showing his enthusiasm for 'bandits, wilderness and magic'.[6]

In a time when artists were often highly constrained by patrons, Rosa had a plucky streak of independence, which celebrated the special role of the artist. "Our wealth must consist in things of the spirit, and in contenting ourselves with sipping, while others gorge themselves in prosperity". He refused to paint on commission or to agree on a price beforehand, and he chose his own subjects. In his own words, he painted "...purely for my own satisfaction. I need to be transported by enthusiasm and I can only employ my brushes when I am in ecstasy."[7] This tempestuous spirit became the darling of British Romantics.

Cesareo (1892) and Cartelli (1899) wrote books taking account of Rosa's satires. The satires, though considerably spread abroad during his lifetime, were not published until 1719. They are all in terza rima, written without much literary correctness, but remarkably spirited, pointed and even brilliant. They are slashingly denunciatory, and from this point of view too monotonous in treatment. Rosa here appears as a very severe castigator of all ranks and conditions of men, not sparing the highest, and as a champion of the poor and down-trodden, and of moral virtue and Catholic faith. It seems odd that a man who took so free a part in the pleasures and diversions of life should be so ruthless to the ministers of these.

The satire on Music exposes the insolence and profligacy of musicians, and the shame of courts and churches in encouraging them. Poetry dwells on the pedantry, imitativeness, adulation, affectation and indecency of poets — also their poverty, and the neglect with which they were treated; and there is a very vigorous sortie against oppressive governors and aristocrats. Tasso's glory is upheld; Dante is spoken of as obsolete, and Ariosto as corrupting.

Painting inveighs against the pictorial treatment of squalid subjects, such as beggars (though Rosa must surely himself have been partly responsible for this misdirection of the art), against the ignorance and lewdness of painters, and their tricks of trade, and the gross indecorum of painting sprawling half-naked saints of both sexes. War (which contains a eulogy of Masaniello) derides the folly of mercenary soldiers, who fight and perish while kings stay at home; the vile morals of kings and lords, their heresy and unbelief.

In Babylon ofrece, Rosa represents himself as a fisherman, Tirreno, constantly unlucky in his net-hauls on the Euphrates; he converses with a native of the country, Ergasto. Babylon (Rome) is very severely treated, and Naples much the same.

Envy (the last of the satires, and generally accounted the best, although without strong apparent reason) represents Rosa dreaming that, as he is about to inscribe in all modesty his name upon the threshold of the temple of glory, the goddess or fiend of Envy obstructs him, and a long interchange of reciprocal objurgations ensues. Here occurs the highly charged portrait of the chief Roman detractor of Salvator (we are not aware that he has ever been identified by name); and the painter protests that he would never condescend to do any of the lascivious work in painting so shamefully in vogue. 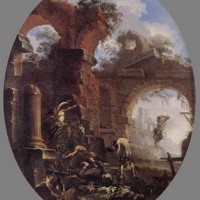 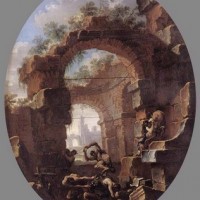 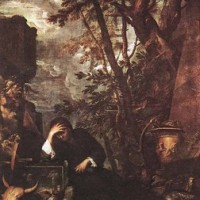 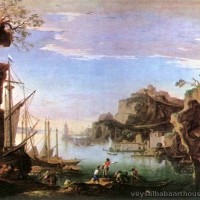 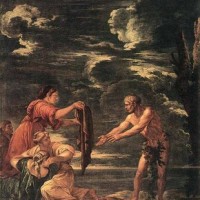 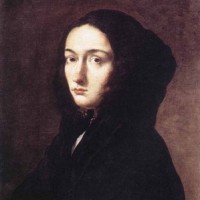 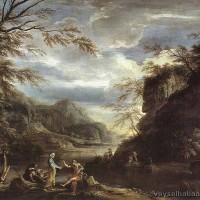 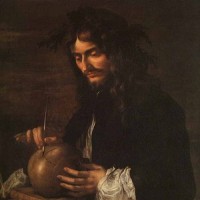 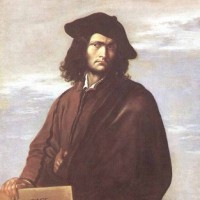 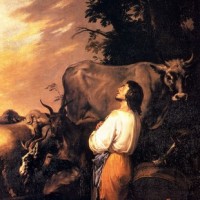 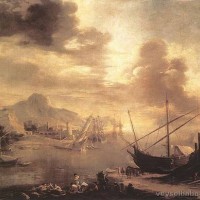 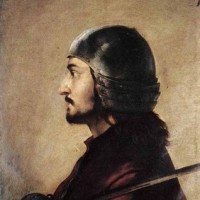