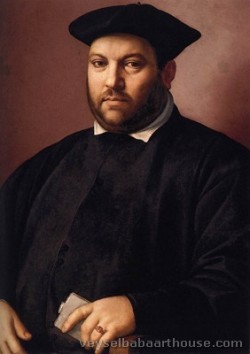 He was born in Florence. Being less than eleven years old when his father died, Ridolfo was brought up by his uncle Davide Ghirlandaio, a painter of moderate talents. Vasari states that Ridolfo trained under Fra Bartolomeo.

His works between the dates 1504 and 1508 show a marked influence from Fra Bartolomeo and Raphael, with whom he was friends. From Rome in 1508, Raphael asked Ridolfo to join him; but the Florentine painter stayed. In Florence, he became one of the prominent painters of altarpieces, frescoes, and portraits.

He was prominent in the execution of vast scenic canvases for various public occasions, such as the wedding of Giuliano de' Medici, and the entry of Leo X into Florence in 1515. In his prime he was honest and conscientious as an artist; but from about 1527 he declined, having already accumulated a handsome property, more than sufficient for maintaining in affluence his large family of fifteen children, and his works became comparatively mannered and repetitive. His sons traded in France and in Ferrara; he himself took a part in commercial affairs, and began paying some attention to mosaic work, but it seems that, after completing one mosaic, the Annunciation over the door of the Annunziata Basilica, patience failed him for continuing such minute labours. In his old age Ridolfo was greatly disabled by gout. He appears to have been of a kindly, easy-going character, much regarded by his friends and patrons.

Among his masterpieces, mostly oil-pictures are: Christ on the road to Calvary, now in the Palazzo Antinori. An Annunciation in the Abbey of Montoliveto near Florence, Leonardesque in style. In 1504, he completed the Coronation of the Virgin.[1] He painted a Nativity[2] and a predella in the Oratory of the Bigallo, Florence, with five panels, representing the Nativity and other subjects. In 1514, on the ceiling of the chapel of St Bernard in the Palazzo Pubblico, Florence, Ghirlandaio painted a fresco of the Trinity, with heads of the twelve apostles and other accessories, and the Annunciation. He also painted an Assumption of the Virgin, who bestows her girdle on St Thomas, in the choir loft of Prato cathedral.

Around the same date, he painted a picture showing his highest skill, replete with expression, vigorous life, and firm accomplished pictorial method, St Zenobius Resuscitating a Child and a Translation of the remains of St Zenobius.[3] He also painted a Virgin and various saints at San Pietro Maggiore of Pistoia. In 1521, the Pietà, at Sant'Agostino, Colle di Val d'Elsa, life-sized. Towards 1526, the Assumption,[4] containing a self-portrait. Ghirlandaio painted a portrait of a young Cosimo I de' Medici, future Grand-Duke. In 1543, a series of frescoes in the monastery of Santa Maria degli Angeli. In the National Gallery, London is The Procession to Calvary. His Portrait of a Man with a Pink is in the Dunedin Public Art Gallery. An Adoration by the Shepherds attributed to Ghirlandaio is displayed at the Snite Museum of Art at Notre Dame University in South Bend, Indiana.

A great number of altar-pieces were executed by Ghirlandaio, with the assistance of his favorite pupil, Michele Tosini (who due to his mentor acquired the name Michele di Ridolfo). Other of his pupils were Mariano Grazidei of Pescia,[5] Carlo Portelli of Loro in the Valdarno, and Baccio Gotti who moved to France,.[6] 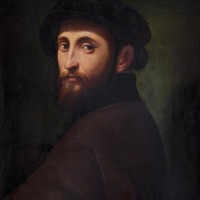 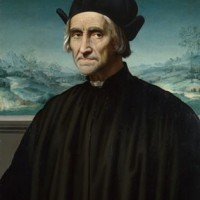 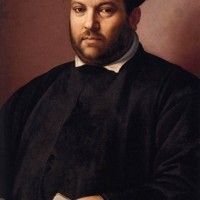 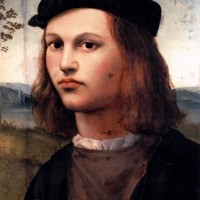 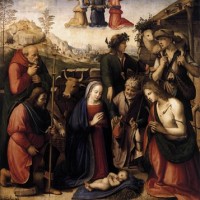 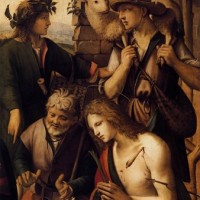 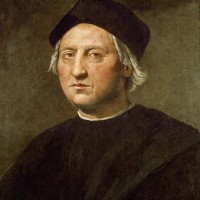 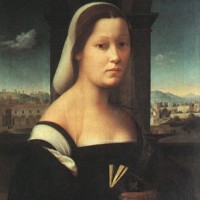 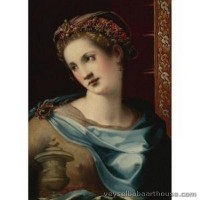