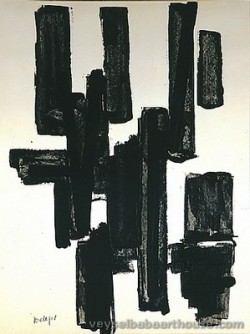 Born in Rodez, Aveyron, in 1919, Soulages is also known as "the painter of black," owing to his interest in the colour "both as a colour and a non-colour. When light is reflected on black, it transforms and transmutes it. It opens a mental field all its own." He sees light as a work material; striations of the black surface of his paintings enable him to reflect light, allowing the black to come out of darkness and into brightness, thus becoming a luminous colour.

Before World War II, Soulages already had toured museums in Paris seeking his vocation and after wartime military service, he opened a studio in Paris, holding his first exhibition at the Salon des Indépendants in 1947. He also worked as a designer of stage sets.

In 1979, Pierre Soulages was made a Foreign Honorary Member of the American Academy of Arts and Letters.

From 1987 to 1994, he produced 104 stained glass windows for the Romanesque Abbey church Sainte-Foy in Conques (Aveyron, France).

Soulages is the first living artist invited to exhibit at the state Hermitage Museum of St. Petersburg and later with the Tretyakov Gallery of Moscow (2001).

In 2007, the Musée Fabre of Montpellier devoted an entire room to Soulages, presenting his donation to the city. This donation includes twenty paintings dating from 1951 to 2006, among which are major works from the 1960s, two large plus-black works from the 1970s, and several large polyptychs.

A retrospective of his art was held at the Centre National d'Art et de Culture Georges Pompidou from October 2009 to March 2010. In 2010, the Museo de la Ciudad de Mexico presented a retrospective of Soulages' paintings that also included an interview-video with the painter (Spanish subtitles).

In 2014, Musée Soulages, opened in Rodez, France, Soulages' hometown. A museum dedicated to permanently displaying his works; plus temporary contemporary exhibitions, Soulages donated 500 works.[2] Made in two separate donations, the paintings represent all stages of his work, from post-war oil paintings to his phase of work called Outrenoir. Together they have formed his most complete display of work from the first 30 years of his career.[3]

Also in 2014 was Soulages' first American exhibition in 10 years, which was jointly hosted at Dominique Lévy and Galerie Perrotin, New York, in which he presented 14 of his recent works.

Soulages has said, "My instrument is not black but the light reflected from the black." [4] Naming his own practice 'Outrenoir', (Beyond Black) the paintings he produces are known for their endless black depth, created by playing with the light reflected off of the texture of the paint. Knowing that he needed a new term to define the way that he was working, Soulages invented 'Outrenoir' to define his practice. Not having a translation into English, the closest meaning is 'beyond black.' In an interview in 2014 he explains the definition of the term, "Outrenoir doesn't exist in English; the closest is "beyond black." In French, you say "outre-Manche," "beyond the Channel," to mean England or "outre-Rhin," "beyond the Rhine," to mean Germany. In other words, "beyond black" is a different country from black." [5]

The infatuation Soulages has with black began long before his investigations with 'Outrenoir' at the age of 60.[6] Initially started by his interest with the prehistoric [5] and his want of retreating to something more pure, primal and deliberately stripped of any other connotations, he says of his fascination with the colour, “during thousands of years, men went underground, in the absolute black of grottoes, to paint with black.” [6] "I made these because I found that the light reflected by the black surface elicits certain emotions in me. These aren't monochromes. The fact that light can come from the colour which is supposedly the absence of light is already quite moving, and it is interesting to see how this happens." [5]

Applying the paint in thick layers, Soulages' painting technique includes using objects such as spoons, tiny rakes and bits of rubber to work away at the painting, often making scraping, digging or etching movements depending on whether he wants to evoke a smooth or rough surface. The texture that is then produced either absorbs or rejects light, breaking up the surface of the painting by disrupting the uniformity of the black.[7] He often uses bold cuts in vertical and horizontal lines, the crevasses and forms created by using angles and contours. In his recent work from 2013-14 Soulages began to more explicitly vary the pigment used in the paint, mixing matt and glossy types of black as well as hardened densities of black pigment.[8] Preferring to suspend the paintings like walls, he uses wires to hang them in the middle of the room, "I always liked paintings to be walls rather than windows. When we see a painting on a wall, it's a window, so I often put my paintings in the middle of the space to make a wall. A window looks outside, but a painting should do the opposite—it should look inside of us" [5]

Instead of having titles, Soulages paintings are named by their size and date of production. 17 December 1966 from 1966, in the collection of the Honolulu Museum of Art demonstrates the artist's boldly brushed black on white canvases.[9] The Centre Georges Pompidou (Paris), the Honolulu Museum of Art, the Montreal Museum of Fine Arts, the Musée d'Art Moderne de la Ville de Paris, the Museum of Modern Art (New York), Museum of Modern Art, Rio de Janeiro, the National Gallery of Art (Washington D.C.), the Solomon R. Guggenheim Museum (New York), and the Tate Gallery (London) are among the public collections holding work by Pierre Soulages. 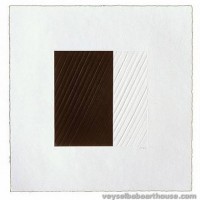 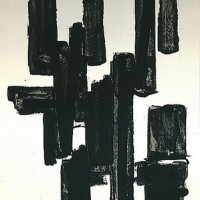 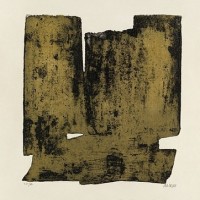 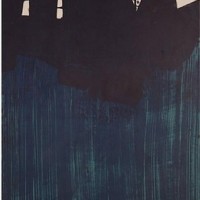 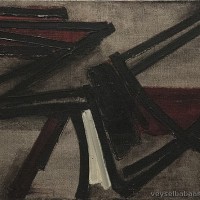 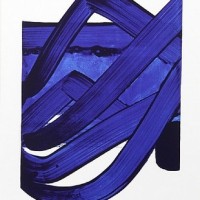 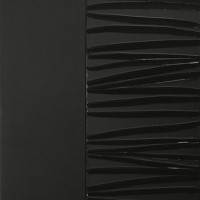 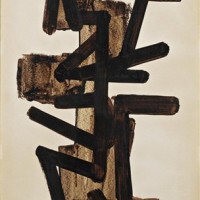 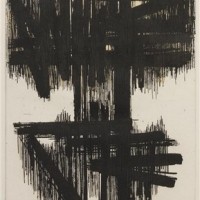