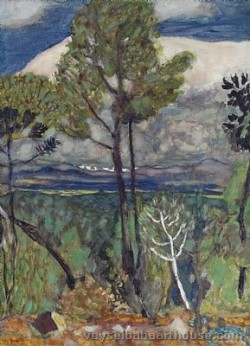 Pierre Bonnard (French: [bɔnaʁ]; 3 October 1867 — 23 January 1947) was a French painter and printmaker, as well as a founding member of the Post-Impressionist group of avant-garde painters Les Nabis.[1] Bonnard preferred to work from memory, using drawings as a reference, and his paintings are often characterized by a dreamlike quality. The intimate domestic scenes, for which he is perhaps best known, often include his wife Marthe de Meligny.[2]

Bonnard has been described as "the most thoroughly idiosyncratic of all the great twentieth-century painters", and the unusual vantage points of his compositions rely less on traditional modes of pictorial structure than voluptuous color, poetic allusions and visual wit.[3] Identified as a late practitioner of Impressionism in the early 20thcentury, Bonnard has since been recognized for his unique use of color and his complex imagery.[4] "It's not just the colors that radiate in a Bonnard", writes Roberta Smith, "there’s also the heat of mixed emotions, rubbed into smoothness, shrouded in chromatic veils and intensified by unexpected spatial conundrums and by elusive, uneasy figures."[5]

Bonnard was born in Fontenay-aux-Roses, Hauts-de-Seine on 3 October 1867. He led a happy and carefree youth as the son of a prominent official of the French Ministry of War. He studied classics during his baccalaureate. At the insistence of his father, Bonnard studied law, graduating and briefly practicing as a barrister in 1888.[6] However, he had also attended art classes at Ecole des Beaux-Arts and Académie Julian,[7] and soon decided to become an artist.[8] 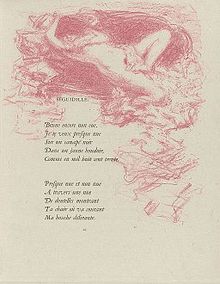 Illustration for a poem by Paul Verlaine, 1900

His earlier work such as Woman in Checkered Dress (1890) shows the influence of Japanese prints. In 1891, he met Toulouse-Lautrec and began showing his work at the annual exhibition of the Société des Artistes Indépendants. In the same year Bonnard also began an association with La Revue Blanche, for which he and Édouard Vuillard designed frontispieces.[9] Bonnard's talent was appreciated early in his career, Claude Roger-Marx remarked in 1893 that he "catches fleeting poses, steals unconscious gestures, crystallises the most transient expressions".[10] His first show was at the Galerie Durand-Ruel in 1896.

In his twenties Bonnard was a part of Les Nabis, a group of young artists committed to creating work of symbolic and spiritual nature. Other Nabis include Vuillard and Maurice Denis. In addition to his paintings, he also became known for his posters and book illustrations, as well as for his prints and theater set designs.[5] He left Paris in 1910 for the south of France.[11][12]

Bonnard was described, by his own friend and historians, as a man of "quiet temperament" and one who was unobtrusively independent. His life was relatively free from "the tensions and reversals of untoward circumstance". It has been suggested that: "Like Daumier, whose life knew little serenity, Bonnard produced a work during his sixty years' activity that follows an even line of development."[13]

Bonnard is known for his intense use of color, especially via areas built with small brush marks and close values. His often complex compositions—typically of sunlit interiors and gardens populated with friends and family members—are both narrative and autobiographical. Bonnard's fondness for depicting intimate scenes of everyday life, has led to him being called an "Intimist"; his wife Marthe was an ever-present subject over the course of several decades.[10] She is seen seated at the kitchen table, with the remnants of a meal; or nude, as in a series of paintings where she reclines in the bathtub. He also painted several self-portraits, landscapes, street scenes, and many still lifes, which usually depicted flowers and fruit.

Bonnard did not paint from life but rather drew his subject—sometimes photographing it as well—and made notes on the colors. He then painted the canvas in his studio from his notes.[14] "I have all my subjects to hand", he said, "I go back and look at them. I take notes. Then I go home. And before I start painting I reflect, I dream."[15]

He worked on numerous canvases simultaneously, which he tacked onto the walls of his small studio. In this way he could more freely determine the shape of a painting; "It would bother me if my canvases were stretched onto a frame. I never know in advance what dimensions I am going to choose."[4]

In 1938 there was a major exhibition of his work along with Vuillard's at the Art Institute of Chicago. He finished his last painting, The Almond Tree in Blossom, a week before his death in his cottage on La Route de Serra Capeou near Le Cannet, on the French Riviera, in 1947. The Museum of Modern Art in New York City organized a posthumous retrospective of Bonnard's work in 1948, although originally it was meant to be a celebration of the artist's 80th birthday.

Although Bonnard avoided public attention, his work sold well during his life. At the time of his death his reputation had already been eclipsed by subsequent avant-garde developments in the art world; reviewing a retrospective of Bonnard's work in Paris in 1947, Christian Zervos assessed the artist in terms of his relationship to Impressionism, and found him wanting. "In Bonnard's work," he wrote, "Impressionism becomes insipid and falls into decline."[16] In response Henri Matisse wrote "I maintain that Bonnard is a great artist for our time and, naturally, for posterity."[17]

Two major exhibitions of Bonnard's work took place in 1998: February through May at the Tate Gallery in London, and from June through October at the Museum of Modern Art in New York City.

In 2009 the exhibition "Pierre Bonnard: The Late Interiors" was shown at the Metropolitan Museum of Art.[3] Reviewing the exhibition for the magazine The New Republic, Jed Perl wrote:

"Bonnard is the most thoroughly idiosyncratic of all the great twentieth-century painters. What sustains him is not traditional ideas of pictorial structure and order, but rather some unique combination of visual taste, psychological insight, and poetic feeling. He also has a quality that might be characterized as perceptual wit—an instinct for what will work in a painting. Almost invariably he recognizes the precise point where his voluptuousness may be getting out of hand, where he needs to introduce an ironic note. Bonnard's wit has everything to do with the eccentric nature of his compositions. He finds it funny to sneak a figure into a corner, or have a cat staring out at the viewer. His metaphoric caprices have a comic edge, as when he turns a figure into a pattern in the wallpaper. And when he imagines a basket of fruit as a heap of emeralds and rubies and diamonds, he does so with the panache of a magician pulling a rabbit out of a hat."[3]

In 2016 the Legion of Honor in San Francisco hosted an exhibit "Pierre Bonnard: Painting Arcadia", featuring more than 70 works that span the artist’s entire career.[18] 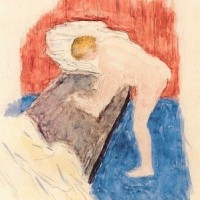 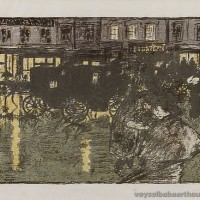 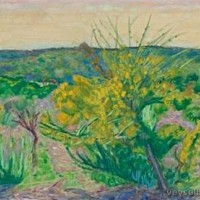 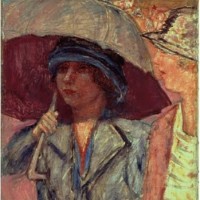 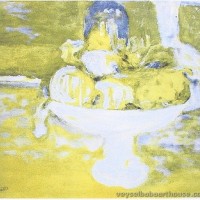 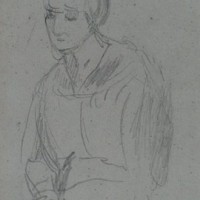 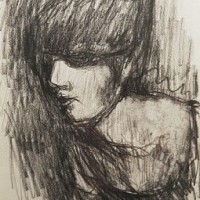 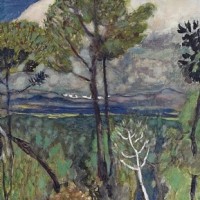 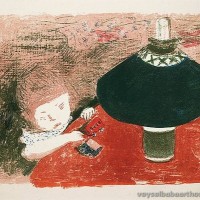