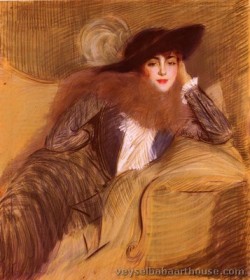 Paul César Helleu (17 December 1859 – 23 March 1927) was a French oil painter, pastel artist, drypoint etcher, and designer, best known for his numerous portraits of beautiful society women of the Belle Époque. He also conceived the ceiling mural of night sky constellations for Grand Central Terminal in New York City. He was also the father of Jean Helleu and the grandfather of Jacques Helleu, both artistic directors for Parfums Chanel.

Paul César Helleu was born in Vannes, Brittany, France. His father, who was a customs inspector, died when Helleu was in his teens. Despite opposition from his widowed mother, he then went to Paris and studied at Lycée Chaptal. In 1876, at age 16, he was admitted to the École des Beaux-Arts, beginning academic training in art with Jean-Léon Gérôme. Helleu attended the Second Impressionist Exhibition in the same year, and made his first acquaintances with John Singer Sargent, James McNeill Whistler, and Claude Monet. He was struck by their modern, bold alla prima technique and outdoor scenes, so far removed from the studio. To survive following graduation, Helleu took a job with the firm Théodore Deck Ceramique Française hand-painting fine decorative plates. At this same time, he met Giovanni Boldini, a portrait painter with a facile, bravura style, who became a mentor and comrade, and strongly influenced his future artistic style.

When he was 18 years old, Helleu established a close friendship with John Singer Sargent, four years his senior, that was to last his lifetime. Already becoming established, Sargent was receiving commissions for his work. Helleu had not sold anything, and was deeply discouraged almost to the point of abandoning his studies. When Sargent heard this, he went to Helleu and picked one of his paintings, praising his technique. Flattered that Sargent would praise his work, he offered to give it to him. Sargent replied, "I shall gladly accept this, Helleu, but not as a gift. I sell my own pictures, and I know what they cost me by the time they are out of my hand. I should never enjoy this pastel if I hadn't paid you a fair and honest price for it." With this he paid him a thousand-franc note.

Helleu was commissioned in 1884 to paint a portrait of a young woman named Alice Guérin (1870–1933). They fell in love, and married two years later, on 28 July 1886. Throughout their lives together, she was his favourite model. Charming, refined and graceful, she helped introduce them to the aristocratic circles of Paris, where they were popular fixtures.

On a trip to London with Jacques-Émile Blanche in 1885, Helleu met Whistler again and visited other prominent artists of the age. His introduction to James Jacques Tissot, an accomplished society painter from France who made his career in England, proved to be a revelation. From Tissot, Helleu saw, for the first time, the possibilities of drypoint etching with a diamond point stylus directly on a copper plate. Helleu quickly became a virtuoso of the technique, drawing with the same dynamic and sophisticated freedom with his stylus as with his pastels. His prints were very well received, and they had the added advantage that a sitter could have several proofs printed to give to relations or to friends. Over the course of his career, Helleu produced more than 2,000 drypoint prints.

Soon, Helleu was displaying works to much acclaim at several galleries. Degas encouraged Helleu to submit paintings to the Eighth Impressionist Exhibition in May and June 1886. The show was installed in a Paris apartment at 1 rue Laffitte, which ran concurrently with the official Salon that year to make a statement. Although 17 artists joined the famous exhibit that included the first Neo-Impressionistic works, Helleu, like Monet, refused to participate.

In 1886, Helleu befriended Robert de Montesquiou, the poet and aesthete, who bought six of his drypoints to add to his large print collection. Montesquiou later wrote a book about Helleu that was published in 1913 with reproductions of 100 of his prints and drawings. This volume remains the definitive biography on Helleu. Montesquiou introduced Helleu to Parisian literary salons, where he met Marcel Proust, who also became a friend. Proust created a literary picture of Helleu in his novel Remembrance of Things Past as the painter Elstir. (Later, Helleu was to engrave a well-known portrait of Proust on his deathbed.) Montesquiou's cousin, the Countess Greffulhe, enabled Helleu to successfully expand his career as a portrait artist to elegant women in the highest ranks of Paris society, for which he is now most renowned. His noteworthy subjects include the Duchess of Marlborough, the Marchesa Casati, Belle da Costa Greene, Louise Chéruit, and Helena Rubinstein.

Looking for new inspiration, Helleu began a series of paintings and color prints of cathedrals and stained glass windows in 1893, followed by flower studies and landscapes of parks in Versailles. Helleu took up sailing, owning four yachts over his life. Ships, harbor views, life at port in Deauville, and women in their fashionable seaside attire, became subjects for many vivid and spirited works.

In 1904, Helleu was awarded the Légion d'honneur and became one of the most celebrated artists of the Edwardian era in both Paris and London. He was an honorary member in important beaux-arts societies, including the International Society of Painters, Sculptors, and Engravers, headed by Auguste Rodin, and the Société Nationale des Beaux-Arts.

On his second trip to the United States in 1912, Helleu was awarded the commission to design was the ceiling decoration in New York City's Grand Central Terminal. He decided on a mural of a blue-green night sky covered by the starry signs of the zodiac that cross the Milky Way. Although the astrological design was widely admired, the ceiling was covered in the 1930s. More than sixty years later, in 1998, it was completely restored and millions of visitors and passengers at the station still marvel at Helleu's ceiling mural today.

Helleu made his last trip to New York City in 1920 for an exhibition of his work, but he realized that the Belle Époque was over. He felt out of touch, and shortly after his return to France, he destroyed nearly all of his copper plates, retiring to family life. While planning for a new exhibition with Jean-Louis Forain, he died of peritonitis following surgery in Paris, in 1927 at age 67.

Among many of Helleu's friends was Coco Chanel, who picked beige as her signature colour upon the advice of the artist—the colour of the sand on the beach of Biarritz in the early morning. Both his son Jean Helleu and his grandson Jacques Helleu became artistic directors for Parfums Chanel. 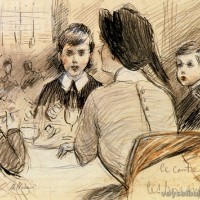 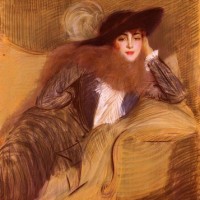 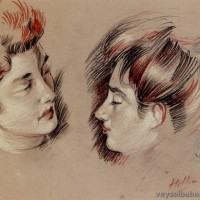 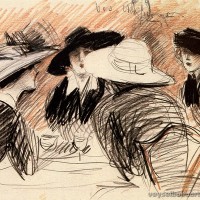 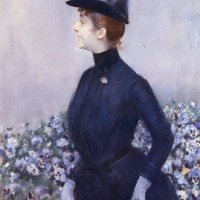 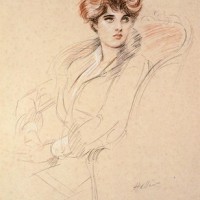 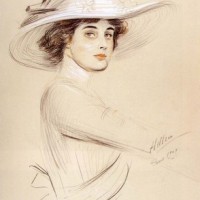 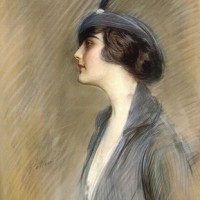 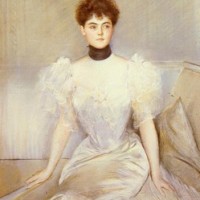 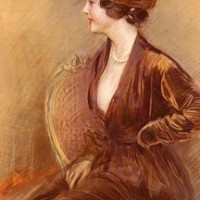