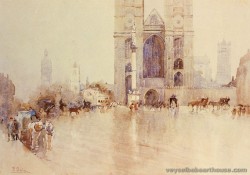 Paolo Sala (January 24, 1859 – 1929) was an Italian painter, mainly of vedute and genre scenes. He often painted dal vero, that is, en plein air. He was also known for his ability to paint animals in rural scenes. He founded the Lombard association of watercolor painters in 1911.

Born in Lombardy, he was resident in Milan. he trained with Camillo Boito. In 1880, he exhibited in Naples a canvas representing, Interior of the Duomo of Milan. In the next year, in Milan, he exhibited a series of canvases: Return to the Mountains; Arrivo del vapore; Rezzonico; Il frate; Under the Portico; Risi e Sorrisi. Among his genre paintings are: Passeggiata militare; Torrente in Valtellina. In 1883, he exhibited in Milan: Dopo le Gallerie; Impressione dal vero; Remembrance of Winter; Una frana; Canal Grande of Venice; Il turbine; Nel parco. In addition, he displayed the three watercolors: In Val di Gonna; In Val d'Esino; Da Rogoredo. In Rome, in 1883, he exhibited: Surroundings of Varese; Outside of Varese; Cortile rustico near Milan; Ricordo di Venice; and Near the Door. 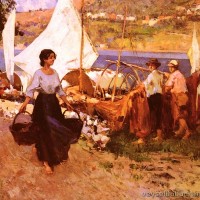 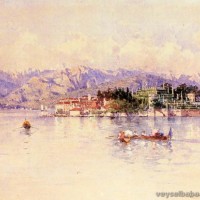 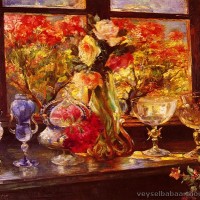 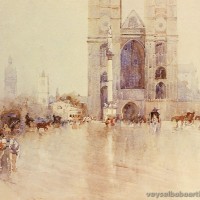