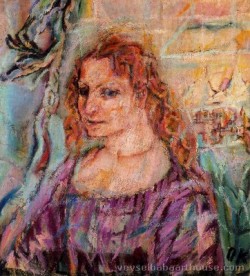 Oskar Kokoschka (1 March 1886 – 22 February 1980) was an Austrian artist, poet and playwright best known for his intense expressionistic portraits and landscapes.

He was born in Pöchlarn, second child to Gustav Josef Kokoschka, a Czech goldsmith, and Maria Romana Kokoschka (née Loidl). His older brother died in infancy in 1887; he had a sister, Berta (born in 1889) and a brother, Bohuslav (born in 1892). Oskar had a strong belief in omens, spurred by a story of a fire breaking out in Pöchlarn shortly after his mother gave birth to him. Kokoschka's life was not easy mainly due to a lack of financial help from his father. They constantly moved into smaller flats, farther and farther from the thriving center of the town. Concluding that his father was inadequate, Kokoschka drew closer to his mother; he felt that he was the head of the household and continued to support his family when he gained wealth. Kokoschka entered secondary school at Realschule, where emphasis was placed on the study of modern subjects such as science and language. Kokoschka was not interested in these subjects, as he found he only excelled in art, and spent most of his time reading classic literature during his lessons. This education of classic literature is said to have influenced his artwork.

One of Kokoschka's professors suggested he pursue a career in fine art. Against his father's will, Kokoschka applied to Kunstgewerbeschule (School of Arts and Crafts) in Vienna, where he was one of three accepted out of 153 applicants. Kunstgewerbeschule was an extremely progressive school that focused mainly on architecture, furniture, crafts and modern design. Unlike the more prestigious and traditional Academy of Fine Art in Vienna, Kunstgewerbeschule was dominated by instructors of the Vienna Secession. Kokoschka studied there from 1904 to 1909, and was influenced by his professor Carl Otto Czeschka in developing an original style.

Among Kokoschka's early works were gesture drawings of children, which portrayed them as awkward and corpse-like. Kokoschka had no formal training in painting and so approached the medium without regard to the "traditional" or "correct" way to paint. The teachers at Kunstgewerbeschule helped Kokoschka gain opportunities through the Wiener Werkstätte or Viennese Workshops. Kokoschka's first commissions were postcards and drawings for children. Kokoschka said that it gave him "the basis of [his] artistic training".[1] His early career was marked by portraits of Viennese celebrities, painted in a nervously animated style. 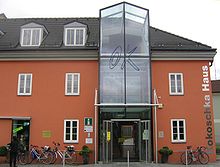 Kokoschka had a passionate, often stormy affair with Alma Mahler. It began in 1912, shortly after the death of her four-year-old daughter Maria Mahler and her affair with Walter Gropius. After several years together, Alma rejected him, explaining that she was afraid of being too overcome with passion. He continued to love her his entire life, and one of his greatest works, The Bride of the Wind (The Tempest), is a tribute to her. The poet Georg Trakl visited the studio while Kokoschka was painting this masterpiece. Kokoschka's poem Allos Makar[2]was inspired by this relationship.

He volunteered for service as a cavalryman in the Austrian army in World War I, and in 1915 was seriously wounded. At the hospital, the doctors decided that he was mentally unstable. Nevertheless, he continued to develop his career as an artist, traveling across Europe and painting the landscape. 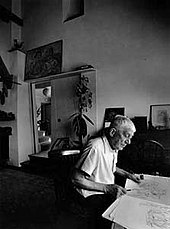 Oskar Kokoschka in 1963, by Erling Mandelmann

He commissioned a life-sized female doll in 1918.[3] Although intended to simulate Alma and receive his affection, the gynoid-Alma did not satisfy Kokoschka and he destroyed it during a party.[4]

Deemed a degenerate by the Nazis, Kokoschka fled Austria in 1934 for Prague. In Prague his name was adopted by a group of other expatriate artists, the Oskar-Kokoschka-Bund (OKB), though he declined to otherwise participate.[5] In 1938, when the Czechs began to mobilize for the expected invasion of the Wehrmacht, he fled to the United Kingdom and remained there during the war. With the help of the British Committee for Refugees from Czechoslovakia (later the Czech Refugee Trust Fund), all members of the OKB were able to escape through Poland and Sweden.

During World War II, Kokoschka and his wife lived in Ullapool, a village along the Wester Ross of Scotland for several summer months. There he drew with colored pencil (a technique he developed in Scotland), and painted many local landscape views in watercolour.[6]

While in Ullapool, Kokoschka painted a painting of his friend, wealthy industrialist Ferdinand Bloch-Bauer, Uncle of Maria Altmann. The painting hangs at the Kunsthaus Museum in Zurich.[7]

Kokoschka became a British citizen in 1946 and would only regain Austrian citizenship in 1978. He traveled briefly to the United States in 1947 before settling in Switzerland, where he lived the rest of his life. He died in Montreux on 22 February 1980.

Kokoschka had much in common with his contemporary Max Beckmann. Both maintained their independence from German Expressionism, yet are now regarded as textbook examples of the style. Nonetheless, their individualism set both apart from the main movements of Twentieth Century modernism. Both wrote eloquently of the need to develop the art of "seeing" (Kokoschka emphasized depth perception while Beckmann was concerned with mystical insight into the invisible realm), and both were masters of innovative oil-painting techniques anchored in earlier traditions. 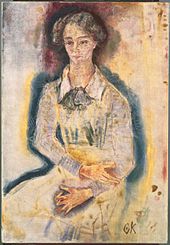 Postage stamp of Konrad Adenauer after a painting by Oskar Kokoschka 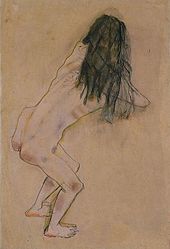 Nude with Back Turned, ink, gouache and chalk drawing, c. 1907

Kokoschka's literary works are as peculiar and interesting as his art. His memoir, A Sea Ringed with Visions, is as wildly psychedelic as anything written by others under the influence of actual hallucinogens.[citation needed] His short play Murderer, the Hope of Women (1909, set ten years later by Paul Hindemith as Mörder, Hoffnung der Frauen) is often called the first Expressionist drama. His Orpheus und Eurydike (1918) became an opera by Ernst Krenek, who was first approached for incidental music. 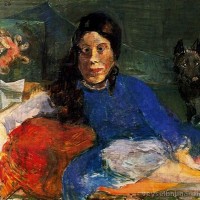 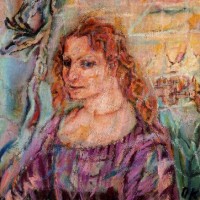 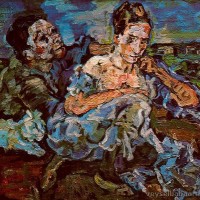 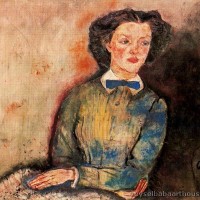 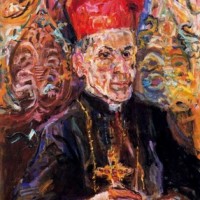 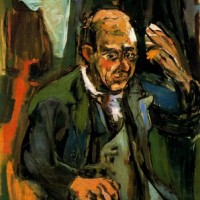