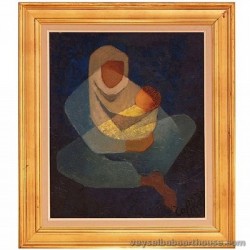 Successively Austro-Hungarian and Italian and French, so European avant la lettre, Toffoli declared himself as "of Trieste  " and signed his paintings either Luigi or Louis, but only Toffoli.

May 20, 1915 , Italy declared war on Austria. Trieste is an Austro-Hungarian port of the Adriatic and the family was forced into exile in Italy. He is eight. In Padua, then in Florence, Luigi discovers arts of religious or profane inspiration.

In 1924 , Luigi Toffoli entered the Naval Academy in Trieste but difficulties forced him to give up studying. He worked as a blacksmith and then tailor and attended evening classes at the Academy of Fine Arts triestine. At the Biennale in Trieste in 1928 , from Chirico and other known artists, Luigi Toffoli has two constructivist style paintings. The leaders of fascist propaganda took an interest in the singular vision of the young artist. The Black Shirts exhort him to commit themselves to their side. He must organize his flight (at the time of the fascist regime, totalitarian, it was forbidden to the Italian nationals to leave the national territory).

In 1930 , Luigi Toffoli took the opportunity of a trip to emigrate to Paris. No rule or paper money, he lives in the neighborhood of La Goutte d'Or, rue Myrha , where his future wife Sylvia, who died in 1973, joined. They will have two sons Patrick and Claude. They live by their wits until Denis Kalman , a renowned designer of the Faubourg Saint-Honoré , engages in his studio. His situation is regularized, his talents as a modelist are recognized. He obtains a card of craftsman trades and teaches the art of the cup to the trade union of the garment.

His reputation is expanding in 1934  ; many controls allow him to settle in Alfortville then Charenton-le-Pont . He became an independent craftsman for Paris fashion houses. It again follows drawing classes, patiently experimenting his style and try the technique of the poster .

In 1935 , a competition was opened by the Colonial Office to mark the tercentenary of the attachment of the West Indies to France. Its composition gets the first prize. Soon after, Luigi Toffoli receives the second prize in an international competition organized by the League of Nations . This is also the time of the first exhibitions in major exhibitions: Salon d'Automne , the Salon des Independants , Salon of Painters Witnesses of their Time, the Marine Museum ...

The economic crisis of 1936 , public scandals and strikes led the Popular Front government. He sometimes attends political rallies where he portraiture Blum , Taittinger , Auriol and other figures of the time.

In 1939 , to escape the compulsory labor service , Luigi Toffoli took refuge in Touraine, Jaulnay where he participated as the Resistance liaison. He now appears as a painter.

He exhibited at the Salon des Indépendants paintings inspired by the world of work, one of the strong themes of his work. In 1947 , Luigi Toffoli obtained French citizenship and became Louis Toffoli 1 .

RG Gallery in Paris organized in 1952 for Louis Toffoli his first solo exhibition. From now on, exhibitions and travel abroad will multiply. In 1954 , Louis Toffoli learned the technique of lithography in the workshops of Fernand Mourlot , then from 1968 he continued his lithographs of editions in those of Jean-Claude Perrin. Lithography will popularize his painting.

In 1956 , he explored Spain and Yugoslavia by train and bike, off the tourist trail, and crunches the locals in search of humanity. Back in Charenton-le-Pont , he exhibited again at the Salon of Painters Witnesses of their Time. His talent was noticed by a Brazilian sponsor in 1960 who invited to exhibit at the Copacabana Palace, Brazil.

Louis Toffoli devoted himself entirely to painting and travel. Israel, the United States, Mexico, China ... and many other countries of which he will paint a work always resurrected at the heart of everyday life. Aubusson weaves in 1976 the first tapestries painter 2 .

From this date until today, Louis Toffoli devoted himself exclusively to painting. Many special exhibitions are held all over the world. Several films and television programs are produced around his work.

The Toffoli museum was inaugurated in 1995 in Charenton-le-Pont . Louis Toffoli donated to the city a hundred works. The museum is now closed, replaced by the municipal gallery Art and Liberty.

Many museums, such as Germany, Brazil, Spain, Holland, Israel, Italy, Morocco, Portugal, Sweden and the United States, have works by the painter. Numerous works are devoted to him.

The paintings of Toffoli immediately impose themselves on the visitor, the light is transparent through all forms, it seems to leave the paintings and the impression of purity that emerges creates a deep intimacy with the characters. Louis Toffoli would be in search of an unusual inner truth, the colors and lights vibrating in his paintings make the motifs of the canvas sing and delight the spectators.

Louis Toffoli uses different techniques for his works: oil painting, lithography, tapestries. The subjects are thus found on different supports, the light appearing in different ways depending on the medium. Louis Toffoli devoted a period of his work to work on light to lithography. He also dedicates a work to the work of the lithographer with the press arm . 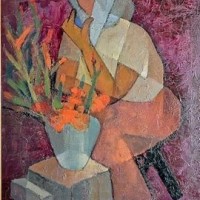