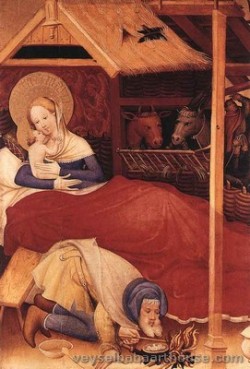 Conrad von Soest, also Konrad in modern texts, or in Middle High German Conrad van Sost or "von Soyst", (born around 1370 in Dortmund;[1] died soon after 1422) was the most significant Westphalian artist and painted in the so-called soft style of International Gothic. He played a leading role in the introduction of this International Courtly Style to Northern Germany around 1390 and influenced German and Northern European painting into the late 15th century.[2] He was the master of a thriving workshop and was accepted into the social circle of the cosmopolitan patrician elite of Dortmund. Dortmund was then a leading and very prosperous member of the influential Hanseatic League.[3]

Conrad von Soest's main surviving works are influenced by French illuminated manuscripts and certain early Parisian examples of Early Netherlandish painting; his detailed knowledge of Parisian patterns and techniques points towards a sojourn in Paris as a journeyman in the 1380s:[citation needed]

Marienaltar in the Marienkirche, Dortmund.

The surviving documents relevant to Conrad von Soest are:

As the name 'Conrad von Soest' does not appear in the list of new citizens and as his marriage contract was written in the form reserved for Dortmund citizens, he was clearly born to a Dortmund family.[9]

The marriage contract ("Morgensprache"), made before witnesses, between "Conrad von Soest" and "Gertrude, daughter of Lambertes van Munster", is dated February 11, 1349.[10] The couple was able to dispose of a considerably sum each in this contract. Another unusual aspect of the contract is the number and quality of the witnesses: 6 members of the cosmopolitan, prosperous and well-educated patriciate of Dortmund, among them the second mayor of the current council, Herrmann Klepping, the tertiary council member, Detmar Klepping, and both mayors already elected for the following council year, Arnd Sudermann and Lambert Berswordt. The wealth of the groom and the eminent witnesses may well indicate that this was a second marriage. (A master had to marry before he could open his own workshop and it would then have taken a while to earn such wealth).

According to the membership list of the Confraternity of Mary of 1396, Conrad von Soest lived in the Ostenhellweg, Dortmund's principal thoroughfare. The list also refers to two other painters resident in the Ostenhellweg, Lambert and Hermann. It is unclear whether they were his journeymen, living in his house, or masters presiding over their own workshops in the same street.

Since 1954, the Landschaftsverband Westfalen-Lippe (Landscape Society Westphalia-Lippe) has awarded the Konrad-von-Soest Prize for Visual Arts, endowed with 12,800 euros. 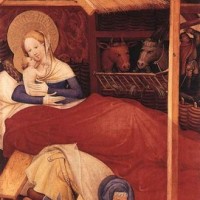 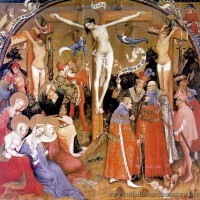 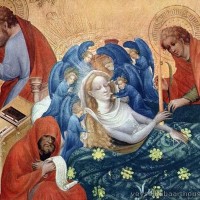