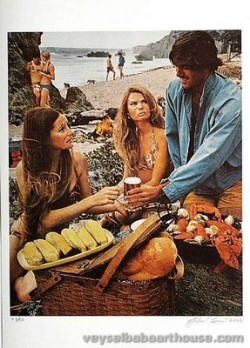 John Currin (born 1962) is an American painter based in New York City. He is best known for satirical figurative paintings which deal with provocative sexual and social themes in a technically skillful manner.[1] His work shows a wide range of influences, including sources as diverse as the Renaissance, popular culture magazines, and contemporary fashion models.[2] He often distorts or exaggerates the erotic forms of the female body, and has stressed that his characters are reflections of himself rather than inspired by real people.[3] "His technical skills", Calvin Tomkins has written, "which include elements of Old Master paint application and high-Mannerist composition, have been put to use on some of the most seductive and rivetingly weird figure paintings of our era."[4]:216

Currin was born in Boulder, Colorado, and grew up in Connecticut, the son of a physics professor from Connecticut and a piano teacher from California. In Connecticut he studied painting privately with a renowned and traditionally trained Russian artist from Odessa, Ukraine, Lev Meshberg.[5]:61 He went to Carnegie Mellon University in Pittsburgh, where he obtained a BFA in 1984, and received a MFA from Yale University in 1986.

At White Columns in New York City in 1989 he exhibited a series of portraits of young girls derived from the photographs in a high school yearbook, and initiated his efforts to distill art from traditionally clichéd subjects. In the 1990s, when political themed art works were favored, Currin brazenly used bold depictions of busty young women, mustachioed men and asexual divorcés, setting him apart from the rest. He used magazines like Cosmopolitan along with old issues of Playboy for inspiration for his paintings. In 1992 Currin moved to the Andrea Rosen Gallery, focusing, less sympathetically, on well-to-do middle-aged women.[5]:62 Nonetheless, by the late 1990s Currin's ability to paint subjects of kitsch with technical facility met with critical and financial success, and by 2003 his paintings were selling "for prices in the high six figures" after he moved to the Gagosian Gallery in Chelsea.[5]:63[6] More recently, he has undertaken a series of figure paintings dealing with unabashedly pornographic themes, saying "One motive of mine is to see if I could make this clearly debased and unbeautiful thing become beautiful in a painting".[5]:58

He has had retrospective exhibitions at the Whitney Museum of American Art and the Museum of Contemporary Art, Chicago[1] and is represented in the permanent collections of the Hirshhorn Museum and Sculpture Garden[7] and the Tate Gallery.[8] Currin's Whitney retrospective of 2004 showcased the development of his career through over 40 of his displayed paintings.[3]

In 1994 Currin met artist Rachel Feinstein at a gallery in which she was living in a self-made gingerbread house as a performance piece. However, Feinstein specializes in sculptural work. They were engaged two weeks later at Currin's show in Paris, and married three years later on Valentine's Day.,[9][10] They have two sons and a daughter.[11] She has been described as his muse,[10] which he says is "kinda corny". However, he has stated "[W]hen I met Rachel I felt that I could connect with some principles that moved my art along, that I had some freedom from the petty things in my own personality." Feinstein has appeared in many of Currin's paintings, both as a recognizable face and as a body model.[12] In 2002 Feinstein and Currin published a 24-page book of their works at the Hydra Workshop in Hydra, Greece which they titled The Honeymooners, John Currin and Rachel Feinstein. It includes an interview conducted by Sadie Coles.[13] In 2011 the New York Times described them as "the ruling power couple in today’s art world.[11]

In a 2011 interview, Currin described his relationship to his work as, "...a completely ambisexual atmosphere. I think you’re right if there’s a reverse logic to my work It’s that the pictures of men are about men and the pictures of women are about me.[14] As of 2015, he is represented by the Gagosian Gallery, in both New York and Paris, displaying his scrutiny and emulation of 16th century Northern European paintings. His inspirations come from Old Master portraits and pin-ups, nymphs, and ethereal feminine prototypes, as well as his muse and wife, Feinstein. His paintings hold conversation between the grotesque and the beautiful, and range inspiration from classical artists such as Fragonard and Bouchard to Rockwell and Crumb [15] 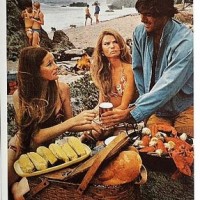 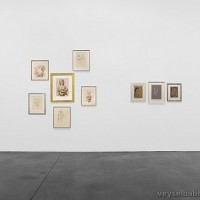 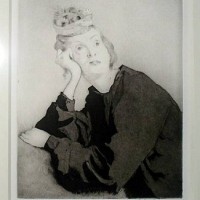