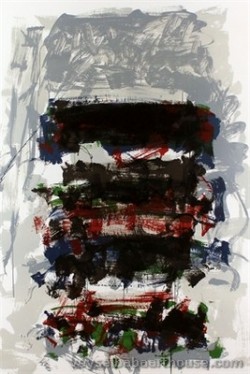 Joan Mitchell (February 12, 1925 – October 30, 1992) was an American "second generation" abstract expressionist painter and printmaker. She was a member of the American abstract expressionist movement, even though much of her career took place in France.[1] Along with Lee Krasner, Grace Hartigan, Helen Frankenthaler, Shirley Jaffe and Sonia Gechtoff, she was one of her era's few female painters to gain critical and public acclaim. Her paintings and editioned prints can be seen in major museums and collections across the United States and Europe.

Mitchell was born in Chicago, Illinois, the daughter of dermatologist James Herbert Mitchell and poet Marion Strobel Mitchell.[2]:21[3] She lived on Chestnut Street in the Streeterville neighborhood and attended high school at Francis W. Parker School in the Lincoln Park neighborhood.

Mitchell studied at Smith College in Massachusetts and The Art Institute of Chicago,[4] where she earned her BFA in 1947 and her MFA in 1950.[5] After moving to Manhattan in 1947, she wanted to study at Hans Hofmann's school in New York but, according to Jane Livingston in her 2002 essay ("The Paintings of Joan Mitchell"), Mitchell attended only one class and declared, "I couldn't understand a word he said so I left, terrified." A $2,000 travel fellowship allowed her to study in Paris and Provence in 1948—49,[6] and she also traveled in Spain and Italy.

Mitchell is recognized as a principal figure—and one of the few female artists—in the second generation of American Abstract Expressionists. By the early 1950s, she was regarded as a leading artist in the New York School. In her early years as a painter, she was influenced by Paul Cézanne, Wassily Kandinsky, Claude Monet, Vincent van Gogh, and later by the work of Franz Kline and Willem de Kooning, Jean-Paul Riopelle, among others.[7]

Her paintings are expansive, often covering two separate panels. Landscape was the primary influence on her subject matter. She painted on unprimed canvas or white ground with gestural, sometimes violent brushwork. She has described a painting as "an organism that turns in space".[8]

An admirer of van Gogh's work, Mitchell observed in one of his final paintings – Wheatfield with Crows (1890) – the symbology of death, suicide, hopelessness, depression and darkness. With her sense that Wheatfield with Crows was a suicide note, she painted a painting called No Birds as a response and as an homage.[2]:390

After moving to Paris in 1959, Mitchell began painting in a studio on the rue Fremicourt[9] in the 15th arrondissement of Paris. During the period between 1960 and 1964, she moved away from the all-over style and bright colors of her earlier compositions, instead using sombre hues and dense central masses of color to express something inchoate and primordial. The marks on these works were said to be extraordinary: "The paint flung and squeezed on to the canvases, spilling and spluttering across their surfaces and smeared on with the artist's fingers."[10] The artist herself referred to the work created in this period of the early 1960s as "very violent and angry," but by 1964 she was "trying to get out of a violent phase and into something else." [11]

According to art historian Linda Nochlin, the "meaning and emotional intensity [of Mitchell's pictures] are produced structurally, as it were, by a whole series of oppositions: dense versus transparent strokes; gridded structure versus more chaotic, ad hoc construction; weight on the bottom of the canvas versus weight at the top; light versus dark; choppy versus continuous strokes; harmonious and clashing juxtapositions of hue - all are potent signs of meaning and feeling."[12]

Mitchell said that she wanted her paintings "to convey the feeling of the dying sunflower" and "some of them come out like young girls, very coy ... they're very human."[8]

In 1951, Mitchell's work was exhibited in the landmark "Ninth Street Show" alongside that of Jackson Pollock, Willem de Kooning, and Hans Hofmann.[13] In 1952, she had her first solo exhibition at the New Gallery.[14]

In October 1957, the first major feature on her work method appeared in ARTnews.[15]

In 1972, Mitchell staged her first major museum exhibition, entitled “My Five Years in the Country,” at the Everson Museum of Art in Syracuse, New York.[16]

December 1988 saw Mitchell's first retrospective exhibition,[17] which she referred to as being art-historized live.[2]:392 It featured 54 paintings produced from 1951 to 1987. Mitchell's first solo show at Robert Miller Gallery (of nine paintings) ran from October 25 to November 25, 1989.[18][19] The second Robert Miller Gallery solo ran from March 26 to April 20, 1991,[18] proved to be very popular, and featured paintings described by John Russell of The New York Times as "self-portraits by someone who has staked everything on autonomous marks that are peculiar to herself".[20] Later retrospective surveys include “Joan Mitchell Pastels,” Whitney Museum of American Art, New York (1992); “The Paintings of Joan Mitchell,” Whitney Museum of American Art, New York (2002); and “The Paintings of Joan Mitchell,” Birmingham Museum of Art, Alabama (2003), travelled to the Modern Art Museum of Fort Worth, Texas and The Phillips Collection, Washington, D.C. through 2004.[21]

The Joan Mitchell Foundation sponsors an Artist-in-Residence Program at the Joan Mitchell Center in New Orleans, Louisiana, located at 2275 Bayou Road in the Faubourg Tremé neighborhood.[26]

Already during her lifetime, Mitchell was rewarded with a considerable degree of commercial success. Between 1960 and 1962, Mitchell earned over $30,000 in art sales, a considerable figure for a woman painter at that time.[27] In 2007, the Art Institute of Chicago sold Ste. Hilaire, 1957[28] at Christie's New York for $3.8 million.[29] In 2012, a record of €5.2 million ($7 million) — then the second-highest price achieved by a female artist at auction — was set at Christie's Paris for an untitled 1971 painting.[29] That year, Mitchell's canvases were the two most expensive works by any woman artist sold at auction, according to auction database Artnet.[23] Works by Mitchell fetched $239.8 million in sales from 1985 through 2013, according to figures compiled by Bloomberg.[30] At Christie's New York in 2014, Mitchell’s untitled 1960 abstract painting sold for $11.9 million, surpassing the high estimate and setting an auction record for the artist. The result also established a new record for an artwork by any female artist at auction, formerly held by Berthe Morisot's Apres le dejeuner (1881).[31][32][33] This price in turn was exceeded by the $44.4 million achieved by the 1932 painting Jimson Weed/White Flower No 1 by Georgia O'Keeffe on 20 November 2014.[34]

Cheim & Read Gallery, New York, is the exclusive agent for the sale and promotion of work in the Joan Mitchell Foundation Collection.[29]

Mitchell married American publisher Barney Rosset in 1949 in Paris. Rosset was a Chicago-born American entrepreneur and former owner of the publishing house Grove Press, who is perhaps best known as the American publisher of the novel Tropic of Cancer by Henry Miller. They divorced in 1952.[3] Although she remained active in the burgeoning art scene of 1950s New York, Mitchell spent increasing amounts of time travelling and working in France.[28] In 1955, Mitchell moved to France to join Canadian painter Jean-Paul Riopelle, with whom she had a long, rich, and tumultuous relationship (from 1955 to 1979).[35] They maintained separate homes and studios, but had dinner and drank together daily. They first lived in Paris, and then moved west to the town of Vétheuil, near Giverny, Claude Monet's home. In 1967, Mitchell inherited enough money to purchase a 2-acre estate in Vétheuil.[3]

From the early 1980s, when Mitchell's health began to fail, until 1992, when she died, her work changed significantly.[36] In 1984, she was diagnosed with advanced oral cancer and a mandibulectomy (removal of the jaw) was advised. In October, she obtained a second opinion from Jean-Pierre Bataini, a pioneer in radiation oncology with the Curie Institute, whose therapy was successful, but left Mitchell with a dead jawbone (osteonecrosis), along with anxiety and depression. She had quit smoking on doctor's orders, but remained a heavy drinker.[2]:384

Mitchell commenced sessions with Parisian psychoanalyst Christiane Rousseaux-Mosettig in November 1984. Mitchell's post-cancer paintings reflect the psychological changes cancer had effected: six Between paintings, Faded Air I, Faded Air II, the A Few Days cycle, the Before, Again cycle and the Then, Last Time group of four.[2]:382–383 Also, in the final years of her life Mitchell returned to the subject of sunflowers with renewed focus.[37] As in Sunflowers, 1990–91, she chose to paint the flowers in a state of decay, reinforcing her desire for the work to “convey the feeling of a dying sunflower.”[14]

Mitchell developed osteoarthritis as a result of hip dysplasia. She underwent hip replacement surgery at Hôpital Cochin in December 1985, but with little success. During her subsequent recuperation at a clinic in Louveciennes, she started watercolor painting. Her postoperative difficulties necessitated using an easel and working on a smaller format. Her River cycle is emblematic of this period.[2]:387

Mitchell was a great admirer of Henri Matisse, especially the vividness of his color and vivacity of his line, once claiming that, "If I could paint like Matisse, I'd be in heaven."[38]Mitchell's New York dealer, Xavier Fourcade, had been diagnosed with AIDS and, in 1986, travelled to France to undergo treatment. Fourcade and Mitchell visited Lille in December to view an exhibition of works by Matisse from the State Hermitage Museum, Leningrad. The trip resulted in the Lille cycle of paintings, followed, after Xavier Fourcade's death on April 28, 1987, by the Chord paintings. The River, Lille and Chord paintings were exhibited at Galerie Jean Fournier, Paris between June 10 and July 13, 1987.[18]

On the eve of Mitchell's full-scale retrospective at the Whitney Museum of American Art, friend and art writer Klaus Kertess wrote in the New York Times:[39]

A passionate inner vision guided Joan's brush. Like her peer Cy Twombly, she extended the vocabulary of her Abstract Expressionist forebears. She imbued their painterliness with a compositional and chromatic bravery that defiantly alarms us into grasping their beauty.

In October 1992, Mitchell flew to New York for a Matisse exhibition[40] at the Museum of Modern Art. Upon her arrival, she was taken to a doctor, who diagnosed advanced lung cancer.[41]:45 She returned to Paris on October 22, returning to Vétheuil briefly before entering hospital in Paris, where friends like John Cheim and Joseph Strick visited her.[41]:46 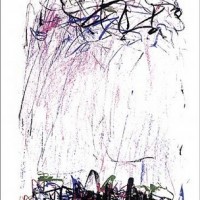 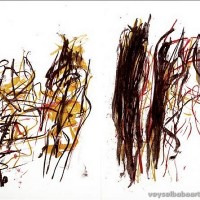 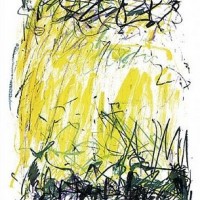 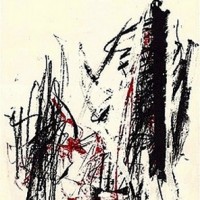 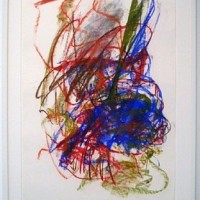 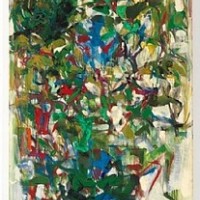 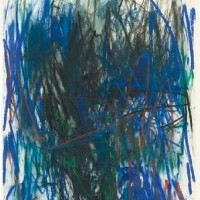 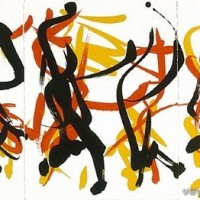 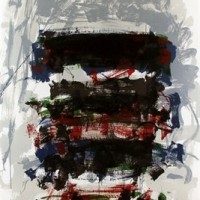