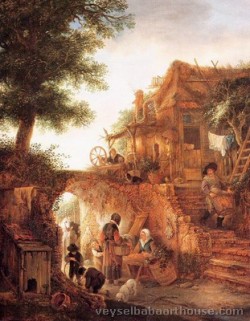 Van Ostade began his studies under his brother, Adriaen, with whom he remained until 1641, when he started his own practice. At an early period he felt the influence of Rembrandt, and this is apparent in a Slaughtered Pig of 1639, in the gallery of Augsburg. He soon found a style more suited to his own inclinations. He produced pictures in 1641-1642 on the lines of his brother - amongst these, the Five Senses, which Adrian afterwards represented by a Man reading a Paper, a Peasant tasting Beer, a Rustic smearing his Sores with Ointment and a Countryman sniffing at a Snuff-box. A specimen of Isaac's work at this period may be seen in the Laughing Boor with a Pot of Beer, in the museum of Amsterdam; the cottage interior, with two peasants and three children near a fire, in the Berlin museum; a Concert, with people listening to singers accompanied by a piper and flute player, and a Boor stealing a Kiss from a Woman, in the Lacaze collection at the Louvre.

The interior at Berlin is lighted from a casement in the same Rembrandtesque style as Adrian's interior of 1643 at the Louvre. He received low prices for this kind of painting, in which he could only remain subordinate to his brother. Gradually he abandoned Adrian's cottage subjects for landscapes in the fashion of Esaias van de Velde and Salomon van Ruysdael. Once only, in 1645, he reverted to the earlier mode, when he produced the Slaughtered Pig, with a boy puffing out a bladder, in the museum of Lille.

Isaac's progress in his new path was greatly facilitated by his previous experience as a figure painter; and, although he now selected his subjects either from village high streets or frozen canals, he gave fresh life to the scenes by depicting animated groups of people with a refined and searching study of picturesque contrasts. He did not live long enough to bring his art to the highest perfection. He died on 16 October 1649 having painted about 400 pictures (see H de Groot, 1910).

The first manifestation of Isaac's surrender of Adrian's style is apparent in 1644 when the skating and sledging scenes were executed which we see in the Lacaze collection and the galleries of the Hermitage, Antwerp and Lille. Three of these examples bear the artists name, spelled Isack van Ostade, and the dates of 1644 and 1645. The roadside inns, with halts of travellers, form a compact series from 1646 to 1649. This is the last form of Isaac's art and has very distinct peculiarities. The air which pervades his composition is warm and sunny, yet mellow and hazy, as if the sky were veiled with a vapour coloured by moor smoke. The trees are rubbings of umber, in which the prominent foliage is tipped with touches hardened in a liquid state by amber varnish mediums. The same principle applied to details such as glazed bricks or rents in the mud lining of cottages gives an unreal and conventional stamp to them.

These quirks are overcome by his broad contrasts of light and shade and the masterly figures of horses, riders, travellers, rustics, quarrelling children, dogs, poultry and cattle. A favorite place is always given to the white horse, which seems as invariable an accompaniment as the grey in the skirmishes and fairs of Philip Wouwerman.

Isaac displays the best qualities in winter scenes. The absence of foliage, the crisp atmosphere and the calm air of cold January days, unsullied by smoke or vapour, preclude the use of the brown tinge, and leave the painter no choice but to ring the changes with a great variety of opal tints. Then the figures emerge with masterly effect on the light background. Amongst the roadside inns it is worth noting those in the collections of Buckingham Palace, the National Gallery, London, the Wallace Collection and Holford collections in England, the Louvre, Berlin, Hermitage and Rotterdam museums and the Rothschild collection at Vienna. The finest of the ice scenes is the famous one at the Louvre. 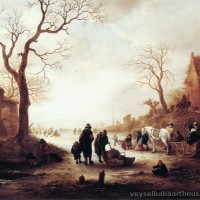 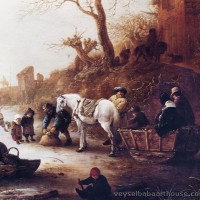 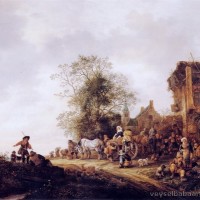 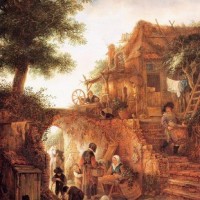 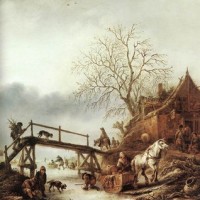 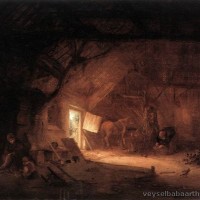 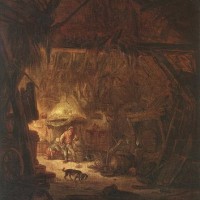 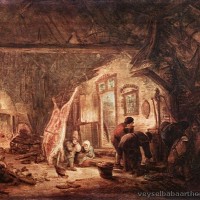 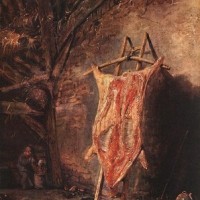 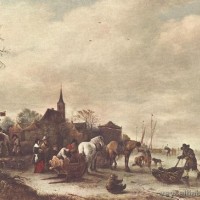