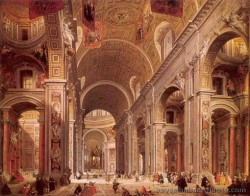 Giovanni Paolo Panini or Pannini (17 June 1691 – 21 October 1765) was a painter and architect, who worked in Rome and is mainly known as one of the vedutisti ("view painters"). As a painter, Panini is best known for his vistas of Rome, in which he took a particular interest in the city's antiquities. Among his most famous works are his view of the interior of the Pantheon (on behalf of Francesco Algarotti), and his vedute—paintings of picture galleries containing views of Rome. Most of his works, specially those of ruins, have a fanciful and unreal embellishment characteristic of capriccio themes. In this they resemble the capricci of Marco Ricci. Panini also painted portraits, including one of Pope Benedict XIV.[1]

As a young man, Panini trained in his native town of Piacenza, under Giuseppe Natali and Andrea Galluzzi, and later the stage designer Francesco Galli-Bibiena. In 1711, he moved to Rome, where he studied drawing with Benedetto Luti.

In Rome, Panini became famous as a decorator of palaces, including the Villa Patrizi (1719–1725), the Palazzo de Carolis (1720), and the Seminario Romano (1721–1722). In 1719, Panini was admitted to the Congregazione dei Virtuosi al Pantheon. He taught in Rome at the Accademia di San Luca and the Académie de France, where he influenced Jean-Honoré Fragonard. In 1754, he served as the principal of the Accademia di San Luca. Panini died in Rome on 21 October 1765.[1]

Panini's studio included Hubert Robert and his son Francesco Panini. His style influenced other vedutisti, such as his pupil Antonio Joli, as well as Canaletto and Bernardo Bellotto, who sought to meet the need of visitors for painted "postcards" depicting the Italian environs.[citation needed] Some British landscape painters, such as Marlow, Skelton and Wright of Derby, also imitated his capricci.[citation needed]

In addition to being a painter and architect, Panini was a professor of perspective and optics at the French Academy of Rome. His masterful use of perspective was later the inspiration for the creation of the "Panini Projection", which is instrumental in rendering panoramic views. [1][2] 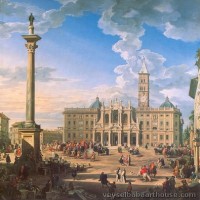 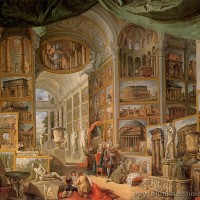 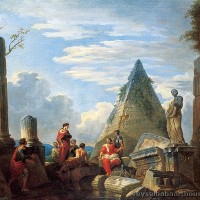 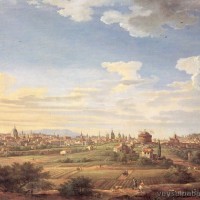 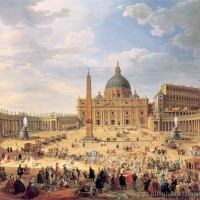 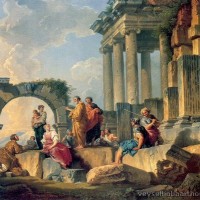 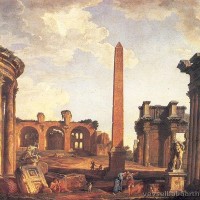 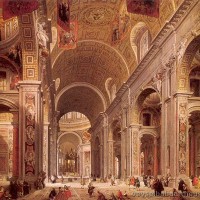 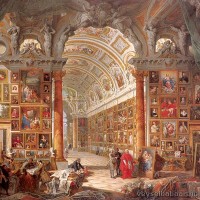 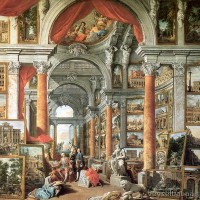