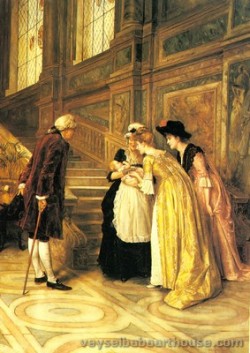 George Goodwin Kilburne,[1] R.I., R.O.I, R.M.S, (24 July 1839 – 1924 London) was an English genre painter specialising in accurately drawn interiors with figures. He favoured the watercolour medium, although he also worked in oils, pencil and - in his early career - engraving.[2]

Kilburne was educated at Hawkhurst, Kent - his father's old school. On leaving at the age of 15, he went to London to serve a 5-year apprenticeship as a wood engraver with the Dalziel brothers, engravers and illustrators. He was highly regarded by his employers who described him as "industrious and constant" and "one of the most satisfactory pupils we ever had".[4] His time as an engraver served him well, allowing him to develop the accuracy and detail which would enhance his subsequent painting. He remained with the firm for a further year before leaving to take up watercolour and oil painting as a profession, quickly becoming one of the most sought after and well-known artists in England.

In June 1862, Kilburne married Janet Dalziel at Old Church, St. Pancras, London. She was the daughter of Robert Dalziel, the painter and brother of the Dalziel brothers. They had three sons and two daughters - of these his eldest son, George Goodwin Kilburne Jnr., became a very well known painter of animals and figures, principally of sporting subjects. In 1881 the family were recorded as living in Hampstead, London.[5]

Kilburne was a keen sportsman and equestrian and involved himself in hunting, cycling and golf. He possessed a good collection of arms and armour, mainly swords, which often figured in his pictures. He was said to be very quiet and almost retiring in manner, yet very companionable and a friendly and a genial host.

He lived for many years at Hawkhurst House, 39 Steeles Road, Haverstock Hill, Hampstead in London and was a member of the Artists' Society Club at Langham Chambers. At the time of his death, in 1924, he was living at 16 Albion Road, Swiss Cottage, London, but died at his daughter Florence's home, next door to his old house, 38 Steeles Road, Haverstock Hill, Hampstead, London.

George's paintings often portrayed the upper classes and ultra-fashionable female beauties in opulent late 18th and early 19th-century settings. His depiction of this beauty was heightened by his attention to detail with dress, and richly decorated interiors. During the period his paintings would have been considered traditional, especially compared to the work of contemporaries such as James McNeill Whistler and the Pre-Raphaelite Brotherhood.

Kilburne travelled extensively in Italy around 1875, and painted in Rome for three months, besides working in Venice at that time, and also in 1876. He did a great deal of sketching in Normandy and Switzerland, besides visiting many parts of England and Wales for the same purpose.

Shortly after the death of the Emperor Napoleon III, the Empress Eugenie commissioned Kilburne to paint several pictures for her. For this purpose he paid many visits to her at Chislehurst, Kent to paint pictures of the rooms used by the late Emperor, which had been kept, just as they were, during his lifetime.

Towards the end of the nineteenth century, he designed and executed a great number of greetings and Christmas cards for the firm of Raphael Tuck & Sons and De La Rue, the minute labour and work for which brought on a serious attack of gout in the eyes. He also contributed a large number of black and white pictures to The Graphic, The Illustrated London News and Cassell's Magazine. Many of his pictures became popular through prints.

Kilburne was elected a member of the New Watercolour Society (RI) in 1866.[6] He became a member of the Royal Miniature Society in 1898 and the Royal Institute of Oil Painters (ROI) in 1883. In London, Kilburne exhibited at the Royal Academy between 1863–1918, at the Royal Society of British Artists (Suffolk Street), New Watercolour Society, Royal Miniature Society, Grosvenor Gallery, Dowdeswell Galleries and others.[7] In the regions he exhibited at Royal Birmingham Society of Artists, the Manchester City Art Gallery, the Royal Glasgow Institute of the Fine Arts and the Walker Art Gallery in Liverpool.

Kilburne's work can be seen nowadays in many public and private galleries including the Walker Art Gallery in Liverpool, Manchester City Art Gallery and the Sheffield Art Gallery.

The funeral of Mr. G. G. Kilburne, R.I., took place at the old Highgate Cemetery on Thursday, 26 June, the service being conducted by the Rev. Dr. Hackett, of St. Peter's, Belsize-square. Amongst those present were the widow; Mr. Wm. Kilburne and wife; Mr. Chas. Kilburne and wife; Mr. and Mrs. R. A. Walton and their son and daughter; Mr. and Mrs. Ernest Woakes and their son-in-law and daughter (Mr. and Mrs. Metzler), and the artist's two youngest daughters; Messrs. Gilbert, Charles & Wilfred Dalziel; H. C. B. Wilson; Mr. Heely Smith, of the Artists' Society, Langham Chambers; W. Blackmore, of the Royal Institute of Painters and Sheridon Knowles of the Institute; Val. Davis, of the Langham Sketching Club; Thomas McLean; A. E. Gosling, and Mr. Hassell. The absence of the deceased's sister and eldest son was due to the failing health of the former, the latter being in California at present. The floral tributes were of exceptional number and beauty, and were contributed from many friends in addition to the family, from the several Societies of which deceased had been a member, and others.

An appreciation by Gilbert Dalziel.

By the death, in his 85th year, of George Kilburne, R.I., which took place on the 2lst ult. at 38 Steele's-road, the residence of his eldest daughter, Mrs. Robert Walton, there disappears the last of a little brotherhood of artists, who, from the "Sixties " and "Seventies" onward, were known and esteemed as the Haverstock Hill men. In Steele's-road alone, in houses almost adjacent, there lived and worked, for many years, Fred Barnard, Sir James D. Linton, Edwin Hayes, and George Kilburne. In Upper Park-road, and later on in Hampstead Hill-gardens, were the brothers Charles and. Towneley Green. Robert Macbeth, R.A., had a studio in England's-lane; G. J. Pinwell lived in Adelaide-road; and A. B. Houghton in King Henry's-road. Sir Luke Fildes, R.A., and Henry Woods, R.A., were at 22 King Henry's-road for many years; and in the neighbourhood were to be found E. F. Brewtnall and many others. All these men have now gone to their rest, with the exception of Sir Luke Fildes, who long since migrated from Hampstead to Kensington. The members of this artistic fraternity were gifted and hardworking men. They, likewise, possessed that little touch of Bohemianism, so prevalent in those bygone days, and which added charm to their personality and helped to produce an atmosphere of genuine hospitality in their homes and studios.

George Goodwin Kilburne was born in Norfolk on 24 July 1839, and was the eldest son of the late Goodwin Kilburne, of Hawkhurst, Kent. On leaving school George was apprenticed for five years to the Brothers Daiziel, the famous wood-engravers. He worked at wood-engraving for one year after serving his time, and then gave it up entirely, devoting himself to painting. In 1862 he married Janet, a niece of the Brothers Dälziel and a daughter of the late Robert Dalziel, a portrait painter of considerable ability, who died as quite a young man. George Kilburne's work, whether in water-colour or oil, was distinctly accomplished, and he possessed the happy knack of hitting upon fascinating subjects for his pictures. His art was popular with the picture-buying public and also with the dealers. For more than sixty years he had no difficulty in selling his things, and he worked with unabated interest and enthusiasm up to the time when his health showed sign of giving way - now a year or two back. In the more robust days he took a particular interest in riding and hunting, and in his collection of ancient arms and armour, of which he was justly proud.

Of his personal character no one who really knew him could ever say a word against him. He was much beloved by his family, his relatives, and his friends, Quiet and reserved by nature, and often somewhat silent, one knew that in spite of these characteristics there was beneath them a true and sincere man. Modest to a degree concerning his own work, he was always ready to see and praise the good qualities in others. He never spoke unkindly of anyone; nor during his long life did he harbour an unfriendly thought even towards those whose code of honour was not as his. In brilliant sunshine we laid him to rest by the side of his first wife, Janet, in old Highgate Cemetery; and as we left him we felt we were bidding farewell to one whose good name would long endure.

With the death of George Goodwin Kilburne, R.I., at the age of eighty-five, the art world loses well-nigh the last of a distinguished group of water-colour artists whose work enriched the latter part of the nineteenth Century. Born in Norfolk on 24 July 1839, George Kilburne was the son of Goodwin Kilburne, of Hawkhurst, Kent, a noted science scholar and founder of the Hawkhurst Grammar School, where his artist son was educated, and spent his youth, coming to London when about fifteen years of age. Apprenticed to the Daiziel Brothers, wood engravers, for five years, George Kilburne learned and practised with some distinction the now almost obsolete art of wood engraving. That he relinquished to cultivate his exceptional talent as a painter, with the result that within nine years he was elected (1868) an Associate of the Institute of Painters in Water Colours, out of which grew the present Royal Institute of Painters in Water Colours. Of this body Kilburne remained a prominent member.

In 1872 he married the daughter of Robert Daiziel and niece of the Brothers Daiziel. Visiting Italy in 1875 and 1876, he found there inspiration for many of his paintings, in particular for those illustrating the Seventeenth and Eighteenth Centuries-works that will continue to be valued as truthful records of the dress and customs of the periods to which they relate, apart from their intrinsic merits as works of art. Kilburne's finest work dates from about this time, and its range was wide enough to cover interiors, landscape, figure pieces, and some notable portraits. After the death of Napoleon III. the Empress Eugénie commissioned him to paint several pictures of the rooms lately occupied by the Emperor at Chislehurst, and with this work she was highly gratified. His wife died in 1882, leaving him with five children, who are still living, the eldest son being an artist devoted to coaching and sporting subjects. George Kilburne himself was a keen sportsman and equestrian as far as his residence in London permitted. Towards the end of the last century he designed and executed a great number of the most charming Christmas and other cards for the firms of Raphael Tuck and Sons and de Ia Rue, the minute labour and work for these bringing on a serious attack of gout in the eyes. This section of his work would of itself provide material for an exhibition. "Pears' Annual" also for several years contained specimens of his best work.

Very quiet and almost retiring in manner Kilburne was yet very companionable, and had a large circle of friends. He was a diligent collector and connoisseur of arms and armour and of the rapier and sword he had at one time an extremely fine collection.

For over fifty years he had been the honorary treasurer of the Artists' Society, and he was an assiduous member of the Langham Sketching Club and Life School. He had outlived most of his contemporaries, amongst whom may be mentioned Sir James Linton, S. Prout, Charles Cattermole, Charles Green, Townley Green, Fred Barnard, Thomas Pyne, Edwin Hayes, Tom Blinks, Pinwell, Walker, Davidson, and Yeend King. 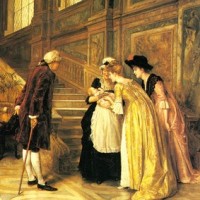 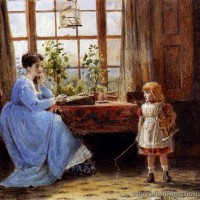 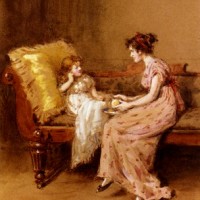 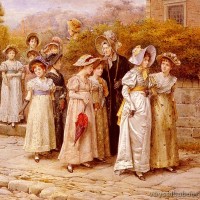 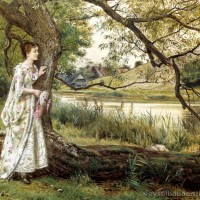 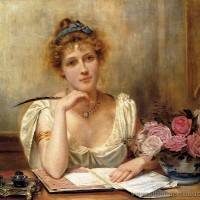 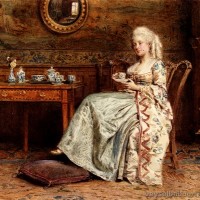 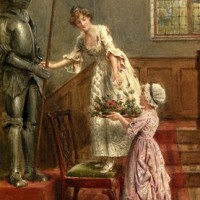 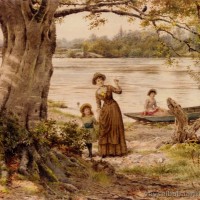