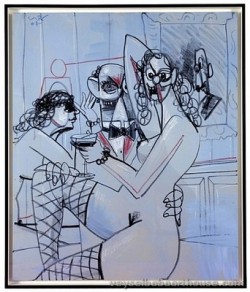 George Condo (born 1957 in Concord, New Hampshire) is an American contemporary visual artist working in the mediums of painting, drawing, sculpture and printmaking. He currently lives and works in New York City. He has two daughters, Eleonore Condo, an actress and graduate of Muhlenberg College, and Raphaelle Condo, currently a music major at Bard College.

Condo studied Art History and Music Theory at the University of Massachusetts in Lowell. Throughout his early life he studied guitar and composition while pursuing his lifelong interest in painting and drawing. After two years at UMass Lowell he moved to Boston where he worked in a silk screen shop and joined proto-synth/punk band The Girls with abstract painter Mark Dagley, avant garde musician Daved Hild and Robin Amos, founding member of Cul de Sac. Their first and only single, Jeffrey I Hear You/Elephant Man (1979) was produced by David Thomas of Pere Ubu. In 1979 Condo met Jean-Michel Basquiat for the first time when the Girls opened for Basquiat’s band Gray at the downtown nightclub Tier 3. After this meeting Condo moved to Ludlow Street in New York City to pursue his career as an artist. In 1980 Condo became a founding member of the Punk/Blues band Hi Sheriffs of Blue.

In the early 1980s when he emerged in the East Village art scene, Condo coined the term Artificial Realism, “the realistic representation of that which is artificial,” to describe his hybridization of traditional European Old Master painting with a sensibility informed by American Pop.[1] Along with Jean-Michel Basquiat and Keith Haring, Condo was instrumental in the international revival of painting from the 1980s onward.[2] Condo’s work has been influential to many artists of his generation and the generation that followed him, including Nigel Cooke, Sean Landers, John Currin, Lisa Yuskavage and Glenn Brown.[3]

The first public exhibitions of his work took place in New York City at various East Village galleries from 1981 to 1983. During this period he worked in Andy Warhol’s factory, primarily in the silkscreen production studio applying diamond dust to Warhol’s Myths series. He moved briefly to Los Angeles and had his first solo exhibition there in 1983 at Ulrike Kantor Gallery. After returning to New York later that year he made his first trip to Europe. Condo moved to Cologne, Germany where he met and worked with several artists from the Mulheimer Freiheit group, including Walter Dahn and Jiri Georg Dokoupil. His first solo exhibition in Europe was in 1984 at Monika Sprüth Gallery.

While still in Europe Condo met and began working with American art dealer Barbara Gladstone and in 1984 he had a simultaneous two-gallery exhibition in New York at Pat Hearn and Barbara Gladstone Galleries. Already close friends with Basquiat by this time, Condo met Keith Haring back in New York and the two remained lifelong friends until Haring’s death from AIDS in 1990.[4] Several of Condo’s most significant works from this period, such as Dancing to Miles (1985), which was included in the 1987 Whitney Biennial, were painted in Haring’s East Village studio.

Between 1985 and 1995 Condo lived and worked mostly in hotels and rented studios between Paris and New York, while continuing to exhibit extensively in the United States and Europe. In Paris. Condo was introduced by Haring to the American writer and artist Brion Gysin, who later introduced him to William S. Burroughs. Condo and Burroughs collaborated on numerous paintings and sculptures between 1988 and 1996. Selected works from their collaborations were exhibited in 1997 at Pat Hearn Gallery, New York.[5] Condo and Burroughs also worked together on a collection of writings and etchings titled Ghost of Chance, which was published by the Whitney Museum in 1991.

While in Paris Condo also met and befriended philosopher and semiotician Félix Guattari, best known for his collaborations with Gilles Deleuze, when Condo was working in a studio in the apartment building where Guattari resided. Guattari wrote extensively on Condo’s work, including an introductory text and interview in the exhibition catalogue for Condo’s 1990 solo exhibition at Galerie Daniel Templon. Of Condo’s paintings Guattari wrote:

“There is then a very specific ‘Condo effect’ which separates you from all the painters you seem to reinterpret. You sacrifice everything to this effect, particularly pictorial structure, which you systematically destroy, thus removing a protective guardrail, a frame of reference which might reassure the viewer, who is denied access to a stable set of meanings.” (Felix Guattari, 1990)

Throughout his career as an artist Condo’s work has served as an influence and inspiration to contemporary writers including Burroughs, Guattari, Demosthenes Davvetas, Donald Kuspit, Wilfried Dickhoff and Salman Rushdie, whose 2001 novel Fury includes a chapter inspired by Condo’s 1994 oil painting The Psychoanalytic Puppeteer Losing His Mind.[6] American fiction writer David Means also used a Condo painting, The Fallen Butler (2010), as inspiration for his short story The Butler’s Lament which appears in the catalogue for the exhibition Mental States, a mid-career survey of the artist’s paintings and sculptures organized by the Hayward Gallery, London and the New Museum, New York in 2011. Allen Ginsberg, a close friend and frequent visitor to Condo’s Paris studio, where he photographed the artist on several occasions, asked Condo to paint his portrait for the cover of his Selected Poems: 1947-1995, published in 1996 by Harper Collins.[7]

In addition to commissions for book covers, such as Jack Kerouac’s Book of Sketches (Penguin Poets, 2006),[8] for which he also wrote the introduction, Condo has also created or designed album covers for numerous musicians.[9] Most notably, in 2010 Condo collaborated with rapper Kanye West and created a series of paintings for West's album My Beautiful Dark Twisted Fantasy and various singles.[10] Kanye West uses a Condo painting as his Twitter image and Condo has painted a Hermès Birkin Bag for West that West gave to Kim Kardashian.[11] Condo also produced 4 alternate copies of the album cover that, although not included on the actual cover of the record, came included with certain productions of the record on vinyl and as individual posters. All variations reflect themes found throughout the West album, and were all considered for the cover. The final design, depicting a demonic caricature of the artist with a female on his lap and bottle in his hand, was even censored by iTunes, and the album cover is now a blurred version of the Condo painting.[12] Condo's work has also been featured on the covers of the Phish album Story of the Ghost (Elektra, 1998), Danny Elfman’s Serenada Schizophrana (2006) and Franck Debussy Schumann by Dora Schwarzberg and Martha Argerich (AventiClassic, 2006), among others. He also has done a t-shirt with Adam Kimmel for Barneys New York.[13]

In 2005 the Museum der Moderne Salzburg and Kunsthalle Bielefeld co-organized the exhibition George Condo: One Hundred Women, curated by Dr. Thomas Kellein. The exhibition was accompanied by a monograph featuring essays by Margrit Brehm, Stacey Schmidt and Kellein. In 2009 the Musee Maillol, Paris organized the exhibition George Condo: The Lost Civilization featuring paintings, drawings and sculpture created between 2003 and 2008. The monograph published by Gallimard in conjunction with the exhibition featured new writings on the artist’s work by Didier Ottinger, Bertrand Lorquin and Massimiliano Gioni, as well as a reprinting of Felix Guattari’s original text from 1990.

In 2011, The New Museum in New York City opened a mid-career retrospective of Condo's work titled Mental States. This watershed exhibition was critically acclaimed by Holland Cotter of The New York Times as “sensational.” The show traveled to Museum Boijmans Van Beuningen in Rotterdam, the Hayward Gallery, and the Schirn Kunsthalle in Frankfurt.

In 2013, Condo's large black-and-white banner featuring a court jester was installed on the façade of the Metropolitan Opera House, advertising the Met’s new production of Verdi’s Rigoletto.[16] In 2016 the Berggruen Museum in Berlin honours Condo with the exhibition "George Condo. Confrontation".

In 2000, Condo was the subject of the documentary film Condo Painting, directed by John McNaughton.[17] The film, which follows the progress of Condo’s large scale oil painting Big Red over the course of one year, features an appearance by Allen Ginsberg, as well as footage of Condo collaborating with William S. Burroughs on paintings the two made together at Burroughs’ Kansas home in the mid-1990s.

In 1999, Condo received an Academy Award from the American Academy of Arts and Letters and in 2005 he received the Francis J. Greenburger Award. He has been invited to lecture at many prestigious institutions including Columbia University, Yale University, Pasadena Art Center, San Francisco MOMA and The Solomon R. Guggenheim Museum, New York. In 2004, Condo taught a six-month course at Harvard University entitled Painting Memory. 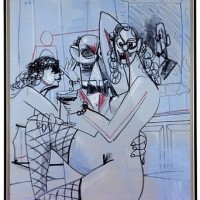 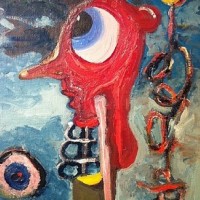 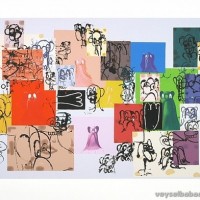 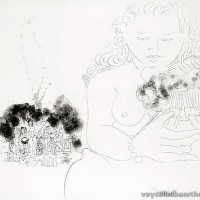 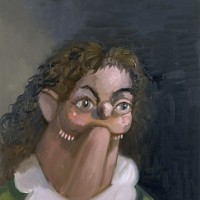 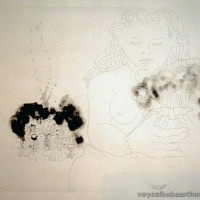