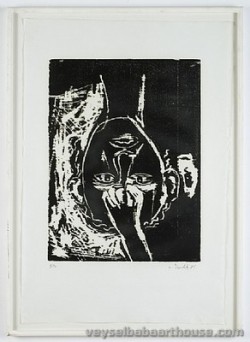 Baselitz was born 23 January 1938, as Hans-Georg Kern in Deutschbaselitz (now a part of Kamenz, Saxony), in Germany. His father was an elementary-school teacher and the family lived in the local schoolhouse.

In 1958, as a student in West Berlin Baselitz met his future wife, Elke Kretzschmar. He married Kretzschmar in 1962 and they had a son named Daniel. In 1966, his second son, Anton, was born, and the family moved to Osthofen, near Worms, and later on elsewhere in Germany and Italy.

In 1961, he adopted the name Georg Baselitz in a tribute to his home town.

Since 2013, Baselitz and his wife live in Salzburg in Austria and obtained Austrian citizenship in 2015.[1]

Baselitz attended the local school in Kamenz; in its in the assembly hall hung a reproduction of the 1859 painting Wermsdorfer Wald by Louis-Ferdinand von Rayski, an artist whose grasp of realism was a formative influence on Baselitz.[2] Baselitz read the writings of Jakob Böhme. At the ages of 14 and 15, he painted portraits, religious subjects, still lifes and landscapes, some in a futuristic style.

In 1955, he applied to study at the Kunstakademie in Dresden but was rejected. In 1956, he successfully enrolled at the Hochschule für bildende und angewandte Kunst in East Berlin. There he studied under professors Walter Womacka and Herbert Behrens-Hangler, and befriended Peter Graf and Ralf Winkler (later known as A. R. Penck). After two semesters, he was expelled for "sociopolitical immaturity."

In 1957, he enrolled at the Hochschule der Künste in West Berlin. In 1961, he attended Hann Trier's master class and completed his studies there the following year. Hann Trier's classes were described as a creative environment largely dominated by the gestural abstraction of Tachism and Art Informel.[2] At the Hochschule der Künste Baselitz immersed himself in the theories of Ernst Wilhelm Nay, Wassily Kandinsky and Kasimir Malevich. During this time he became friends with Eugen Schönebeck and Benjamin Katz. Art historian Andreas Franzke describes Baselitz primary artistic influences at this time as Jackson Pollock and Philip Guston.[2]

In 1957, Baselitz produced his first original works in a distinct style of his own, among them the imaginary portraits "Uncle Bernhard"/ "Onkel Bernhard." In the same year, he started work on the "Rayski-Head"/ "Rayski-Kopf" series.

In 1963, Baselitz's first solo exhibition at Galerie Werner & Katz, Berlin, caused a public scandal. Two of the pictures, "The Big Night Down The Drain"/ "Die große Nacht im Eimer" (1962/63) and the "Naked Man"/ "Nackter Mann" (1962), were seized by the public prosecutor, after a friend had announced their being seized in a local newspaper - a self-fulfilling, intentional scandal. The ensuing court case did not end until 1965.

Baselitz spent the spring of 1964 at Schloß Wolfsburg and produced his first etchings in the printing shop there, which were exhibited later that year. The next year, he won a six-month scholarship to study at the Villa Romana in Florence. While there, he studied Mannerist graphics and produced the "Animal Piece"/ "Tierstück" pictures. After returning to West Berlin, he worked until 1966 on the "Heroes"/ "Helden" group, which includes the large-format composition "The Great Friends"/ "Die großen Freunde." Through early 1969, he produced further large-format "Foresters"/ "Waldarbeiter" pictures. In 1969, using Wermsdorfer Wald by Louis-Ferdinand von Rayski as a model, he painted his first picture to feature an inverted motif, "The Wood On Its Head"/ "Der Wald auf dem Kopf."

In the 1970s, Baselitz exhibited regularly at Munich's Galerie Heiner Friedrich. Most of the works he produced during this time were landscapes themed as pictures-within-a-picture. In 1970, at the Kunstmuseum Basel, Dieter Koepplin staged the first retrospective of drawings and graphic works by Baselitz. At the Galeriehaus in Cologne's Lindenstraße, Franz Dahlem put on the first exhibition of pictures with upside-down motifs. In 1971, the Baselitz family once again moved, relocating to Forst an der Weinstraße. He used the old village school as studio and started painting pictures featuring bird motifs. He exhibited several times in the next few years around Germany and also participated in the 1972 documenta 5 in Kassel. This same year he began using a fingerpainting technique. He painted landscapes until 1975, often based on motifs he would find in publications such as the ″Mitteilungen des Landesvereins Sächsischer Heimatschutz e. V.″. In 1975, the family moved to Derneburg, near Hildesheim. Baselitz visited New York for the first time and worked there for two weeks. He also visited Brazil, participating in the 13th Biennale in São Paulo.

In 1976, Baselitz set up an additional studio in Florence, which he used until 1981. In 1977, he began working on large-format linocuts. He began teaching at the Staatliche Akademie der Bildenden Künste in Karlsruhe, where he was appointed professor in 1978. From 1978 until 1980, he worked on diptychs using the tempera painting technique (combinations of motifs), multipart pictures (series of motifs), and large-format individual works such as "The Gleaner"/ "Die Ährenleserin," "Rubble Woman"/ "Trümmerfrau," "Eagle"/ "Adler" and "Boy Reading"/ "Der lesende Knabe." The works became more abstract, with scriptural elements predominating. In 1980, he showed his first sculpture at the Venice Biennale.

In 1981, Baselitz set up an addition study in Castiglione Florentino, near Arezzo, which he used until 1987. His work was exhibited in New York for the first time in 1981. By 1982, he began devoting more time to sculpture, in addition to several exhibitions. In 1983, he began using Christian motifs in much of his artwork, and completed the major composition "Dinner in Dresden"/ "Nachtessen in Dresden". In the same year, he took up a new professorship at the Hochschule der Künste Berlin. In 1986, in recognition of Baselitz's achievements, he was awarded the Kaiserring by the city of Goslar. Through the 1980s, Baselitz's work was exhibited frequently in Germany. In 1989, the title Chevalier dans l'Ordre des Arts et des Lettres was conferred upon Baselitz by French Minister of Arts Jack Lang.

In 1990, at the Nationalgalerie im Alten Museum in Berlin, the first major exhibition of Baselitz's works in East Germany was staged. In 1992, he resigned from the Akademie der Künste in Berlin. In 1993, he designed the set for Harrison Birtwistle's opera "Punch and Judy," staged under the direction of Pierre Audi at the Dutch Opera in Amsterdam. He also took part in the International Pavilion at the Venice Biennale with the "Male Torso"/ "Männlicher Torso" sculpture, accompanied by oversized drawings. In 1994, Baselitz designed a stamp for the French postal service. He also produced his first ground gold picture that year. In 1995, the first major retrospective of Baselitz's work in the US was staged at the Guggenheim in New York City. This retrospective was also exhibited in Washington, D.C. and Los Angeles. Throughout the 1990s, his work was exhibited frequently throughout Europe. In 2002, a retrospective of Baselitz's work was shown in Art Gallery of Yapı Kredi Bank in Istanbul.

During this time, Baselitz lived and worked near Munich and in Imperia in Italy.

His work was exhibited in London, at the Royal Academy of Arts in late 2007, and in the White Cube gallery in 2009.

From 21 November 2009, to 14 March 2010, the Museum Frieder Burda and Baden-Baden’s Staatliche Kunsthalle exhibited a comprehensive survey of the artist, featuring approximately 140 works. "Baselitz. A Retrospective" was also presented at the two neighbouring museums, with the Museum Frieder Burda displaying "50 years of painting", the Staatliche Kunsthalle "30 years of sculpture".

In a 2013 interview, Baselitz was quoted as saying, "women don’t paint very well. It’s a fact. There are, of course, exceptions." Citing the comparative lack of commercial success of work by women painters in the most expensive markets as proof, he stated, "Women simply don't pass the test. (...) The market test, the value test." [3]

Baselitz's statements elicited rebuttals from art historians and critics, including Sarah Thornton, author of Seven Days in the Art World, who countered, "[t]he market gets it wrong all the time. To see the market as a mark of quality is going down a delusional path. I’m shocked Baselitz does. His work doesn't go for so much."[citation needed]

In the 1970s, Baselitz became famous for his upside-down images. He is seen as a revolutionary painter as he draws the viewer’s attention to his works by making them think and sparking their interest. The subjects of the paintings don’t seem to be as significant as the work’s visual insight. Throughout his career, Baselitz has varied his style, ranging from layering substances to his style, since the 1990s, which focuses more on lucidity and smooth changes.[5] 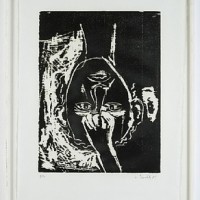 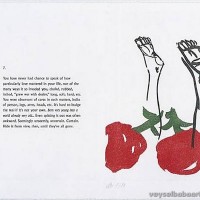 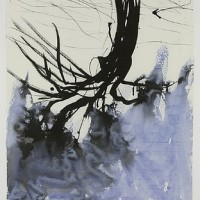 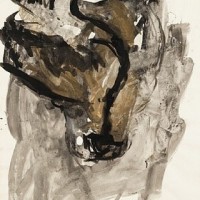 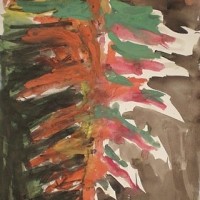 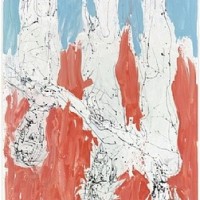 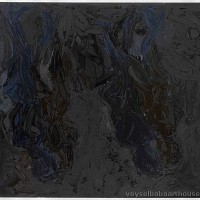 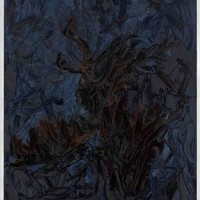