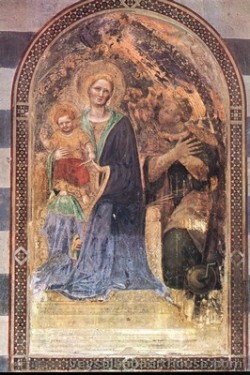 Gentile da Fabriano (c. 1370 – 1427) was an Italian painter known for his participation in the International Gothic painter style. He worked in various places in central Italy, mostly in Tuscany. His best-known works are his Adoration of the Magi from the Strozzi Altarpiece, (1423) and the Flight into Egypt.

Gentile was born in or near Fabriano, in the Marche. His mother died some time before 1380, and his father, Niccolò di Giovanni Massi, retired to a monastery in the same year, where he died in 1385. Little is known of his formation: one of his first known works, a Madonna with Child (c. 1395–1400, now in Berlin) shows the influence of the northern Italian late-Gothic painting.

By around 1405, Gentile da Fabriano was working in Venice. He painted a panel for the church of Santa Sofia, now lost; Jacopo Bellini worked perhaps in his workshop. Between 1408 and 1409, he painted a fresco (now lost) in the Doge's Palace depicting the naval battle between the Venetians and Otto III. In Venice he knew Pisanello and perhaps Michelino da Besozzo.

From 1410–1412 is one of his first masterworks, the Valle Romita Polyptych (now at the Pinacoteca di Brera). In 1410–1411 he was at Foligno, where he frescoed the Palazzo Trinci. In 1414 he moved to Brescia, at the service of Pandolfo III Malatesta, and painted the Broletto Chapel, a work now mostly lost. In the Spring 1420 he was again in Fabriano.

On 6 August 1420 he was in Florence, where he painted his famous altarpiece depicting the Adoration of the Magi (1423), now in the Uffizi and regarded as one of the masterpieces of the International Gothic style. His other works in Florence include the Quaratesi Polyptych (May 1425). In June–August 1425 he was in Siena, where he painted a Madonna with Child, now lost, for the Palazzo dei Notai on Piazza del Campo. Until October he was in Orvieto, where he painted his fresco of the Madonna and Child in the Cathedral. In 1427 he arrived in Rome, commissioned by Pope Martin V the decoration of the nave of the Basilica of St. John in Lateran, which was completed by Pisanello after his death.

Gentile is known to have died before 14 October 1427. He is commonly said to have been buried in the church now called S. Francesca Romana in Florence, but his tomb vanished; there is evidence, however, that he may be buried in the church of Santa Maria in Trastevere, in Rome, the place of his death.

He left no works in the Marche, except possibly a Madonna and Child (of uncertain attribution) in the Duomo at Sant'Angelo in Vado, near Urbino. He also left one painting in Venice. 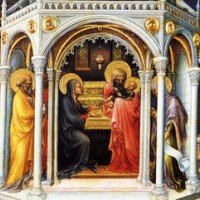 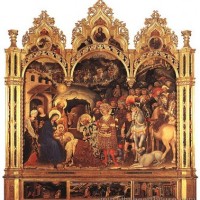 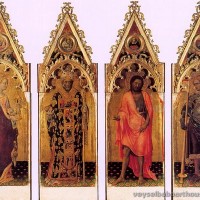 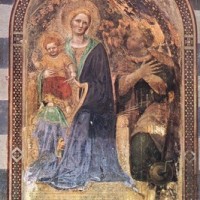 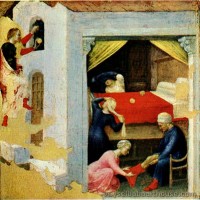 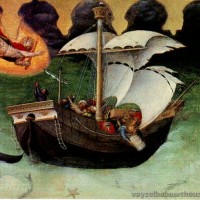 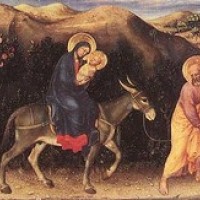