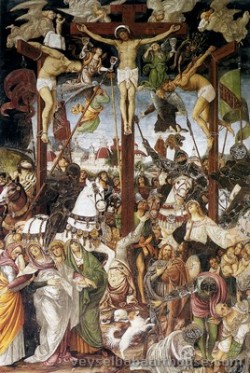 Gaudenzio Ferrari (c. 1471 – January 11, 1546) was a Northern Italian painter and sculptor of the Renaissance.

Gaudenzio was born to Franchino Ferrari at Valduggia in the Valsesia in the Duchy of Milan. Valduggia is now in the Province of Vercelli in Piedmont. He is said to have first learned the art of painting at Vercelli from Gerolamo Giovenone. He subsequently studied in Milan, in the school of the Cathedral artisan Giovanni Stefano Scotti, and perhaps alongside Bernardino Luini.[1] HCirca 1504 he proceeded to Florence. It was once thought that he later moved to Rome. He died in Milan.

Gaudenzio was not related to Defendente Ferrari (c.1490–1535) a painter from Chivasso, nor to Eusebio Ferrari (1508–33) the painter from Vercelli.

His initial pictorial style may be considered as derived mainly from the old Milanese school, which had imbibed the classic influence of Leonardo and pupils such as Bramantino. However, the provincial impetus was also strong, as is demonstrated in his emotive work at the Sacro Monte of Varallo.

By 1513, Gaudenzio had depicted the Life of Christ in a fresco at Santa Maria delle Grazie in Varallo Sesia. He returned to work in the chapels of the Sacro Monte di Varallo by 1524. The chapels are dispersed over a hilltop sanctuary, connected by a winding path, and containing a combination of diorama and wax museum[2] with life-size terracotta figures.[3] He executed his most memorable work, a fresco of the Crucifixion (pictured right), with a multitude of figures, no less than twenty-six of them being modelled in actual relief, and colored; on the vaulted ceiling are lamenting angels. The figures include goitrous bestial assailants.[4]

There are other works which show flashes of innovation such as the crowded chorus decorating duomo of Santa Maria dei Miracoli in Saronno or his fresco of St Anne.[5] This painting shows the overlap of Milanese realism and Venetian colorism.

He was a very prolific painter, distinguished by strong animation. In general character, his work suggests more the 15th than the 16th century. His subjects were always religious. Andrea Solario, Giovanni Battista Cerva, Gian Paolo Lomazzo, and Fermo Stella were his principle students. 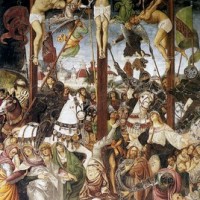 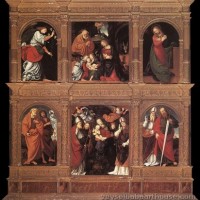 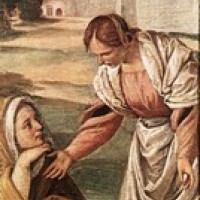 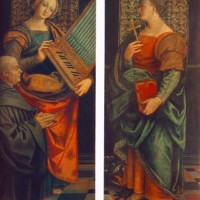 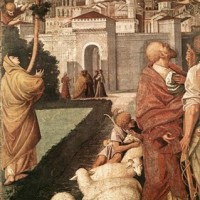