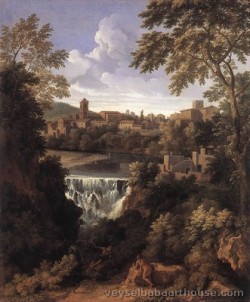 Dughet was born in Rome, the son of a French pastry-cook [1] and his Italian wife.[2] He has always generally been considered as a French painter, although in fact he never visited France.[1] In around 1635 he became a pupil of Nicolas Poussin, who had married his sister Anne five years earlier.[1] Because of this connection he was widely known as "Gaspard Poussin"[2]

He specialised in painting landscapes of the Roman Campagna[3] becoming, along with his exact contemporary Salvator Rosa, one of the two leading landscape painters of his time.[1] He painted several cycles of frescoes, including one, showing various sites around Rome, at the Colonna Palace.[1] He worked with Pier Francesco Mola, Cozza, and Mattia Preti at the Palazzo Pamphilj in Valmontone.[3] He often collaborated with Guillaume Courtois who painted the staffage in his landscapes. This was the case, for instance, in the works for the Palazzo Pamphilj.[4] There is another fresco cycle by Dughet, though in a bad state of preservation, in San Martino ai Monti.[3]

During the 18th century Dughet's work became especially popular amongst British collectors,[2] to such an extent that his name became attached to almost any classical landscape,[1] and his style proved influential on British landscape painting and garden design.[2] His Sacrifice of Abraham, once the property of the Colonna, is now, with other of his works, in the National Gallery, London.[3] 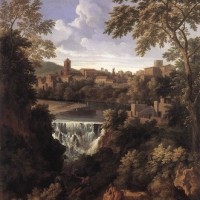 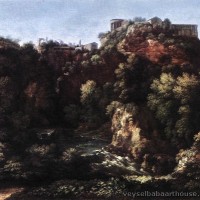 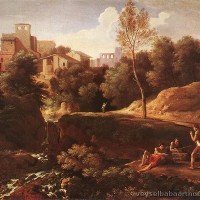 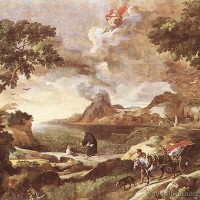