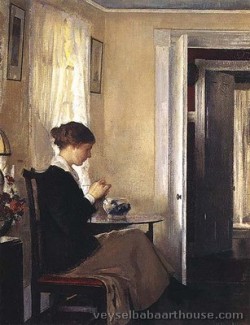 Edmund Charles Tarbell (April 26, 1862 – August 1, 1938) was an American Impressionist painter. A member of the Ten American Painters, his work hangs in the Boston Museum of Fine Arts, Metropolitan Museum of Art, National Gallery of Art, Smithsonian American Art Museum, Corcoran Gallery of Art, DeYoung Museum, National Academy Museum and School, New Britain Museum of American Art, Worcester Art Museum, and numerous other collections. He was a leading member of a group of painters which came to be known as the Boston School.

Edmund C. Tarbell was born in the Asa Tarbell House, which stands beside the Squannacook River in West Groton, Massachusetts.[1] His father, Edmund Whitney Tarbell, died in 1863 after contracting typhoid fever while serving in the Civil War. His mother, Mary Sophia (Fernald) Tarbell, remarried a shoemaking-machine manufacturer. Young "Ned" (as he was nicknamed) and his older sister, Nellie Sophia, were left to be raised by their paternal grandparents in Groton, a frontier town during the French and Indian Wars that the early Tarbell family helped settle.[2] 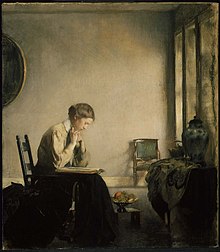 As a youth, Tarbell took evening art lessons from George H. Bartlett at the Massachusetts Normal Art School. Between 1877 and 1880, he apprenticed at the Forbes Lithographic Company in Boston. In 1879, he entered the School of the Museum of Fine Arts, Boston, studying under Otto Grundmann. He matriculated in the same class with Robert Lewis Reid and Frank Weston Benson, two other future members of the Ten American Painters.

Tarbell was encouraged to continue his education in Paris, France, then center of the art world. Consequently, in 1883 he entered the Académie Julian to study under Gustave Boulanger and Jules Joseph Lefebvre. Paris exposed him to rigorous academic training, which invariably included copying Old Master paintings at the Louvre, but also to the Impressionist movement then sweeping the city's galleries. That duality would inform his work. In 1884, Tarbell's education included a Grand Tour to Italy, and the following year to Italy, Belgium, Germany and Brittany.

Tarbell returned to Boston in 1886, where he began his career as an illustrator, private art instructor and portrait painter.[3]

In the Orchard, 1891; Souther siblings, Mrs. Tarbell at far right

While teaching at the Museum School in Boston, Tarbell and his family lived from 1886 until 1906 in the Ashmont section of Dorchester, the house belonging to his stepfather, David Frank Hartford. Then they lived on Commonwealth Avenue in Boston at the Hotel Somerset, located beside The Fens and not far from his atelier in the Fenway Studios on Ipswich Street.

In 1905, they bought as a summer residence a Greek Revival house in New Castle, New Hampshire, an island on the Atlantic coast. Tarbell built his studio perched on the bank of the Piscataqua River, ambling there each morning along gardens of peonies, iris and hollyhocks. Through his north-facing wall of glass he could sketch sailboats as they tacked the busy shipping channel between Portsmouth and the ocean. He was an early and avid proponent of the Colonial Revival movement, collecting American antiques (back when most were considered used furniture) and arranging them with Chinese ceramics, Japanese prints and other objets d'art as studio props. Tarbell also collected salvaged architectural elements; his studio's facade featured a Federal fanlight doorway. In the new living room added to the main house, he installed a Georgian mantelpiece attributed to Ebenezer Dearing (1730–1791), a master Portsmouth ship woodcarver. The Tarbells eventually would retire to New Castle.[4]

In 1889, Tarbell assumed the position of his former mentor, Otto Grundmann, at the Museum School, where he was a popular teacher. He gave pupils a solid academic art training: before they learned to paint, they had to render from plaster casts of classical statues. His students included Bertha Coolidge, Margaret Fitzhugh Browne, Marie Danforth Page, F. Luis Mora, and Lilian Westcott Hale. So pervasive was his influence on Boston painting that his followers were dubbed "The Tarbellites." 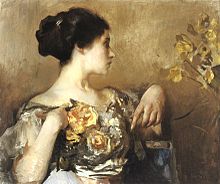 But in 1912, the Museum of Fine Arts hired Huger Elliott from the Rhode Island School of Design as Supervisor of Educational Work, charged with reorganizing the Museum School, which until then managed its own affairs. An upheaval ensued. He lectured Tarbell how to teach, then how to paint. Tarbell was incensed, making it no secret that he considered Elliott artistically inept. In December, Tarbell resigned together with Frank W. Benson, his friend and fellow instructor.[5] The men in 1913 discussed founding a society to encourage art and artists in the city. With financial backing from Lilla Cabot Perry, painter and affluent Brahmin, The Guild of Boston Artists opened in 1914. Tarbell was its first president, serving through 1924.

In 1918, Tarbell was hired as principal of the art school at the Corcoran Gallery of Art in Washington, D.C., a position he held until 1926. But the Museum of Fine Arts wanted him back at the Museum School, appointing him in 1925 as Chairman of the Advisory Council. For two years he promoted and oversaw construction of the school's new building designed by Guy Lowell. In 1930, however, the school asked Augustus John to recommend English artists as instructors. Tarbell and Benson, advocates of indigenous talent, would again resign.[6]

His 1891 plein air painting entitled In the Orchard established his reputation as an artist. It depicts his wife with her siblings at leisure. Tarbell became famous for impressionistic, richly hued images of figures in landscapes. His later work shows the influence of Johannes Vermeer, the 17th-century Dutch painter. In such works, Tarbell typically portrays figures in genteel Colonial Revival interiors; these studies of light and tone are executed with restrained brushwork and color.[7] 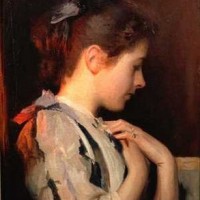 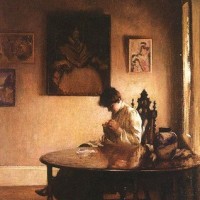 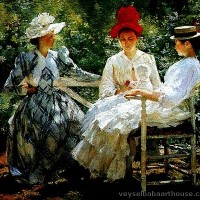 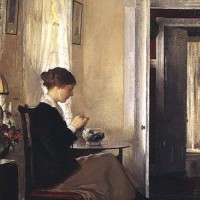 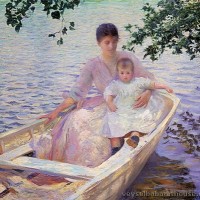 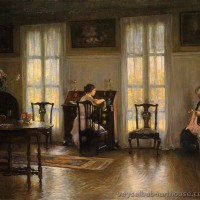 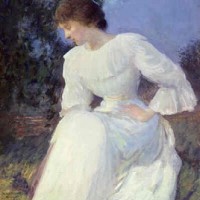 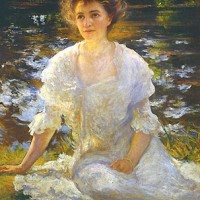 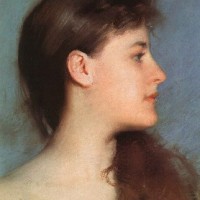 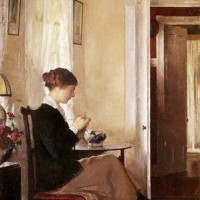 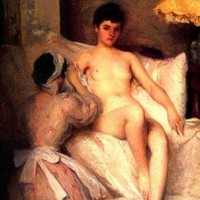 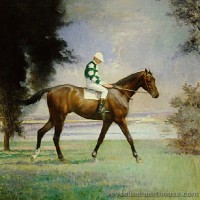