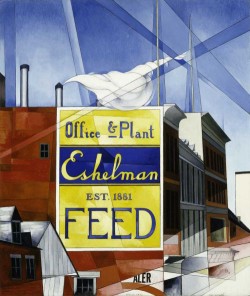 Charles Henry Buckius Demuth (November 8, 1883 – October 23, 1935) was an American watercolorist who turned to oils late in his career, developing a style of painting known as Precisionism.

"Search the history of American art," wrote Ken Johnson in The New York Times, "and you will discover few watercolors more beautiful than those of Charles Demuth. Combining exacting botanical observation and loosely Cubist abstraction, his watercolors of flowers, fruit and vegetables have a magical liveliness and an almost shocking sensuousness."[1]

Demuth was a lifelong resident of Lancaster, Pennsylvania. The home he shared with his mother is now the Demuth Museum,[2]which showcases his work. He graduated from Franklin & Marshall Academy before studying at Drexel University and at Philadelphia's Pennsylvania Academy of Fine Arts. While he was a student at PAFA, he participated in a show at the Academy, and also met William Carlos Williams at his boarding house. The two were fast friends and remained close for the rest of their lives.

He later studied at Académie Colarossi and Académie Julian in Paris, where he became a part of the avant garde art scene. The Parisian artistic community was accepting of Demuth's homosexuality. After his return to America, Demuth retained aspects of Cubism in many of his works.[3]

Throughout his life, Demuth remained deeply attached to his place of birth, Lancaster, in which his family had owned a tobacco shop since 1770.[4] Demuth's fondness for and attachment to Lancaster is reflected within the subject matter of many of his works. Demuth either suffered an injury when he was four years old, or may have had polio or tuberculosis of the hip, leaving him with a marked limp and required him to use a cane. He later developed diabetes and was one of the first people in the United States to receive insulin. Demuth pronounced his surname with emphasis upon the first syllable, earning him the nickname "Deem" among close friends.[5] From 1909 and onwards, Demuth maintained a gay relationship with Robert Evans Locher, an Art Deco interior decorator and stage designer.

While he was in Paris he met Marsden Hartley by walking up to a table of American artists and asking if he could join them. He had a great sense of humor, rich in double entendres, and they asked him to be a regular member of their group. Through Hartley he met Alfred Stieglitz and became a member of the Stieglitz group. In 1926, he had a one-man show at the Anderson Galleries and another at Intimate Gallery, the New York gallery run by Stieglitz.[6] Demuth was introduced to modernism during many trips to Europe between 1907 and 1921. Frequent trips from Lancaster to New York lead him to encounter many avant-garde styles and ideas, most notably Cubism, which is reflected in many of his works.

His most famous painting, The Figure Five in Gold, was inspired by his friend William Carlos Williams's poem "The Great Figure".[7]Roberta Smith described the work in The New York Times: "Demuth's famous visionary accounting of Williams, I Saw the Figure Five in Gold, [is] a painting whose title and medallion-like arrangement of angled forms were both inspired by a verse the poet wrote after watching a fire engine streak past him on a rainy Manhattan street while waiting for Marsden Hartley, whose studio he was visiting, to answer his door."[8] Describing its importance, Judith H. Dobrzynski in The Wall Street Journal wrote: "It's the best work in a genre Demuth created, the "poster portrait". It's a witty homage to his close friend, the poet William Carlos Williams, and a transliteration into paint of his poem, "The Great Figure". It's a decidedly American work made at a time when U.S. artists were just moving beyond European influences. It's a reference to the intertwined relationships among the arts in the 1920s, a moment of cross-pollination that led to American Modernism. And it anticipates pop art."

The work is one of nine poster portraits Demuth created to honor his creative friends; the others were devoted to artists Georgia O'Keeffe, Arthur Dove, Charles Duncan, Marsden Hartley, John Marin, and writers Gertrude Stein, Eugene O'Neill, and Wallace Stevens. Painted during a period of recovery from illness, these paintings portray their respective painters and writers through referential objects and language, as opposed to literal depictions. These nine "poster portraits" combine letters and abstract shapes with realistic forms. These nine works proved to be a challenge for critics. One reviewer described the works as having been made in “a code for which we have not the key.”[9]

Demuth began a series of paintings in 1919, inspired by the architecture of Lancaster. In creating these works, Demuth notably opted not to use watercolors, instead created the works in oil and tempera. Additionally, these works are larger than any of his others. They possess a notable balance between realism and abstraction. Demuth created works of this manner until 1933, two years before his untimely death.[10]

Demuth, along with Georgia O'Keeffe and Charles Sheeler, was a major contributor to the Precisionist art movement, which began to evolve in America around 1915. Demuth's works often depicted a specific range of forms in a quasi-Cubist, sharply defined manner, a characteristic of Precisionism. Frequently occurring scenes within both Demuth's works are urban and rural landscapes, often consisting of industrial features such as bridges, smoke stacks, and skyscrapers. Demuth's "Aucassin and Nicolette," which can be viewed below, is an exemplary work of Precisionist art. Notable features include the highly structured scene lacking figures, depiction of an industrial setting, and sharp linearity created by geometric figures with no hint of abstraction.[11] Demuth's works of this nature have been perceived as ironic and pessimistic in light of their subject matter.[12]

In 1927, Demuth started a series of seven panel paintings depicting factory buildings in his hometown. He finished the last of the seven, After All in 1933 and died two years later. Six of those paintings are highlighted in Chimneys and Towers: Charles Demuth’s Late Paintings of Lancaster, a 2007 Amon Carter Museum retrospective of his work, displayed in 2008 at the Whitney Museum of American Art.

According to the exhibit notes from the Amon Carter show, Demuth's will left many of his paintings to Georgia O'Keeffe. Her strategic decisions regarding which museums received these works cemented his reputation as a major painter of the Precisionist school.

Charles used the Lafayette Baths as his favorite haunt. His 1918 homoerotic self-portrait set in a Turkish bathhouse was likely set there.[13] Demuth spent most of his life in frail health. By 1920, the effects of diabetes had begun to severely drain Demuth of artistic energy. He died at his residence in Lancaster at the age 51 of complications from diabetes. He is buried at the Lancaster Cemetery.

During the early 20th-century, Demuth resided within an 18th-century building, now restored to early 20th-century appearance by the Demuth Foundation. He created many works within a small studio located on the second floor of this building, which can be found at 120 East King Street, a popular area of Lancaster. One of the oldest homes in the area, it originally served as an 18th-century tavern, eventually repurposed as Demuth's home and studio.[14] 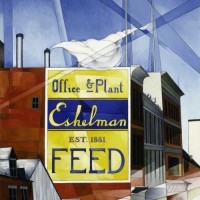 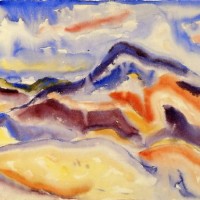 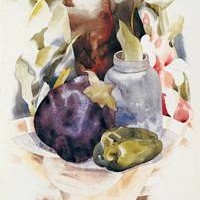 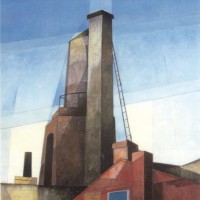 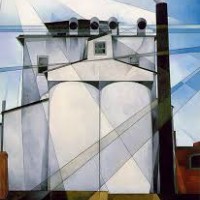 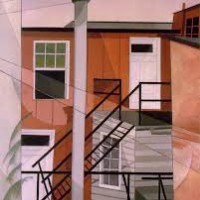 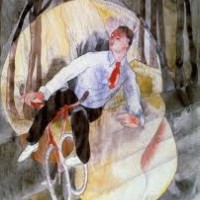 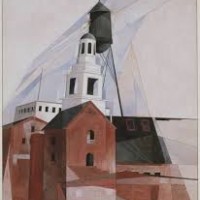 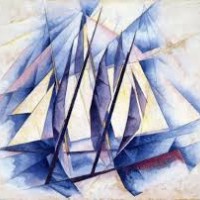 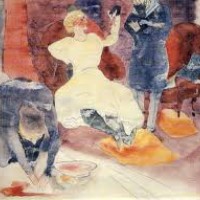 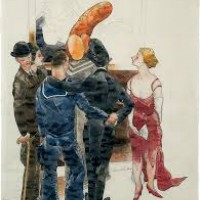 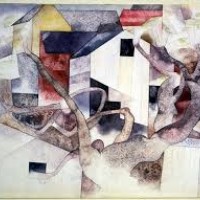 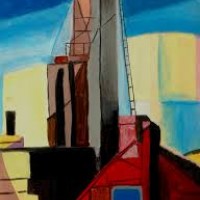 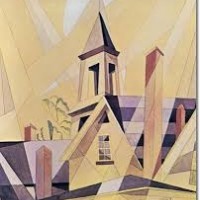