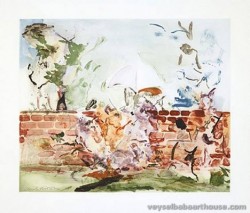 Cecily Brown (born 1969) is a British painter. Her style displays the influence of a variety of painters, from Francisco de Goya, Willem de Kooning, Francis Bacon [1] and Joan Mitchell, to Old Masters like Rubens and Poussin, yet her works also present a distinctly female viewpoint.[2] Brown lives and works in New York City.[3][4]

Brown was born in London, England, in 1969. She is the daughter of novelist Shena Mackay and art critic David Sylvester.[5] Brown earned a B-TEC Diploma in Art and Design from the Epsom School of Art, Surrey, England (1985–87) (now the University for the Creative Arts), took drawing and printmaking classes at Morley College, London (1987–89), and received a BA degree in Fine Arts from the Slade School of Art, London (1989–93).[6] During her studies, she worked as a waitress and, later, in an animation studio. In addition to painting, Brown also studied printmaking and draftsmanship. She earned First Class Honours at Slade and was the first-prize recipient in the National Competition for British Art Students.[1]

Brown relocated to New York from London in 1995.[7] Since 2011, she has been working from a studio at a former office near Union Square. Before that, she maintained a studio in the Meatpacking District, Manhattan.[3]

Brown's paintings combine figuration and abstraction. Expanding the tradition of abstract expressionism, she has become known for her painting style suggestive of abstract and abstract expressionist painters such as de Kooning and Oskar Kokoschka. Sexuality and attraction are important themes in her work, which she explores through semi-figurative and abstract means. Her paintings also recall the works of Philip Guston and the Bay Area Figurative School of the 1950s and 1960s. Brown often titles her paintings after classic Hollywood films, such as The Pyjama Game, The Bedtime Story and The Fugitive Kind. In 2013, Brown based a series of paintings on a photograph of a large group of nude women that appeared on the British release of a 1968 Jimi Hendrix album Electric Ladyland.[8]

The sexuality and eroticism of Brown's depictions of expressive figures and nudes are echoed in rich colors, luscious paint handling, and animated brushwork; her work combines representational and abstract elements. Her tactile technique stands out among contemporaries and links her to the art movement Abstract Expressionism. However, self-conscious of her connection with artists such as Willem de Kooning and Lucian Freud, Brown often interjects fresh humor or irony by titling her paintings after famous musicals and films. She has been grouped with leading female contemporary painters, including Charline von Heyl, Jacqueline Humphries, Laura Owens, Jutta Koether, Amy Sillman, and Emily Sundblad.[9]

Brown describes her process as "organic."[10] She often spends multiple days on works, and will work on up to 20 works at a time, allowing layers of paint to dry between applications.[11]

In 1997, Brown created Untitled, a permanent, site-specific installation for the group exhibition Vertical Paintings at P.S. 1.[12]

In the February 2000 edition of Vanity Fair, Brown, along with fellow artists Inka Essenhigh, John Currin and others, appeared in full-color photographs taken by Todd Eberle. A photograph that appeared in The New Yorker made showed Brown from the back as she stood, cigarette in hand, studying one of her paintings.[14]

In 2004, Brown presided, along with other artists such as Laura Owens and Elizabeth Peyton, over a Democratic fund-raising event, Art Works for Hard Money, in Los Angeles.[15]

Brown has received a lot of critical attention for powerful, athletically-sized canvases and bold brushwork. The assertiveness of her paintings has often been compared to Abstract Expressionist works which, during their time, were linked to a fierce masculinity. As a female artist working in this vein, Brown's works have been seen as confronting both this tradition and gendered assumptions about art.

However, some recent critics have taken a different stance. Roberta Smith, in the New York Times, called a Gagosian exhibit it reviewed in 2000 "lackluster" and suggested that Brown's "career is ahead of her artistic development."[16] In a 2011 review for The Guardian, art critic Adrian Searle rejected the dynamic and assertive surfaces of Brown's art and wrote: "What's really missing in her art is character, and for all the hectic painting, a sense of necessity." Likewise, in 2013, Leah Ollman wrote a review of a Gagosian Gallery show for The LA Times, in which she observed: "Instead of powerful and passionate, her voice comes across as detached. The volume is turned up, but the verve is on low."[17]

"Combing the Hair" (Côte d’Azur), 2013, oil on linen [23]Gagosian Paris announces the exhibition of new paintings by Cecily Brown. This will be her first solo exhibition in Paris, France on October, 19- December, 20 2014. She displayed 11 canvases at the exhibit where she focuses on the themes of narcissism and autoeroticism.[24]

Cecily Brown, Untitled, 2012, oil on linen [25] Gagosian Gallery of New York City presents recent paintings by Cecily Brown on May 7- June 22, 2013. This will be her first solo exhibition in New York since 2008.

Her work has appeared at the Whitney Biennial 2004 in New York,[26] The Triumph of Painting at the Saatchi Gallery, London and “Greater New York” at P.S. 1, New York.

Brown's work has attracted the attention of private art collectors including Elton John and Michael Ovitz. Her paintings are in the permanent collections of important museums and institutions including the Solomon R. Guggenheim Museum, the Whitney Museum of American Art, the Hirshhorn Museum and Sculpture Garden, Tate Modern, Museum of Contemporary Art, Los Angeles, the Albright-Knox Art Gallery, and the Des Moines Art Center.[4]

Brown is represented by Contemporary Fine Arts in Berlin. Between 2000 and 2015, she was also represented by Gagosian Gallery.[27] She previously showed with Deitch Projects.[28]

Cecily Brown was born and raised in England before she moved to New York City. Since she was three years old she had always wanted to be artist and was supported by her family. This support system came from her grandmother and two of her uncles who were also artists.[29] Brown is currently married to an architecture critic Nicolai Ouroussoff; they have one daughter, Celeste.[30] 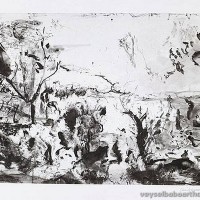 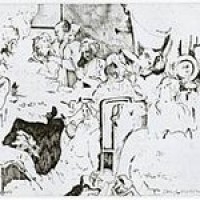 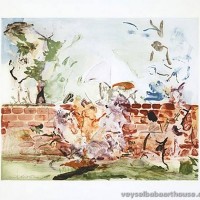 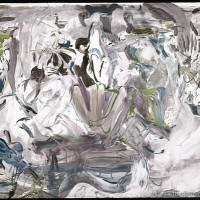 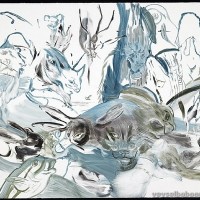