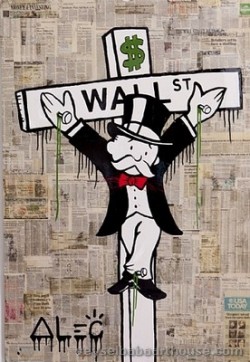 Monopoly is from New York City, He moved to Los Angeles in 2006. He found working there was easier because of the many billboards in the city.[1]

Monopoly is best known for his tuxedoed, monocle and top-hatted graffiti character of Monopoly Man,[2] an idea originally inspired by the stockbroker Bernie Madoff.[3] According to John Wellington Ennis writing for the Huffington Post, "In an era of billion dollar bailouts for banks that already own the country and moguls decrying regulation as un-American, the re-contextualization of the childhood symbol of success and wealth almost needed no explanation."[2] Monopoly also pastes up images of Jack Nicholson.[4][5]

Although graffiti continues to be conveyed as a crime, in his feature in Juxtapoz Magazine, the artist discussed his best efforts to avoid the vandalism aspect of the street art world:

"I stay away from mailboxes, highways, freeways, and basically any federal and government property. I like warehouses and abandoned buildings. For example I would never hit a coffee shop like the one we’re in: they [the owners] are trying to make it just like I am. I try to be as positive as I can about what I put out there and I try to do it with imagery everyone can identify with. Most people walking by my stuff are not graffiti people or art people, so figuring out a way that everyone can identify with my work is important."[6]

Monopoly sometimes employs ghost artists to physically create the works attributed to him. [8]

Artnet included Alec Monopoly in the Top 10 Most Searched Artists on its website in 2014.[9] 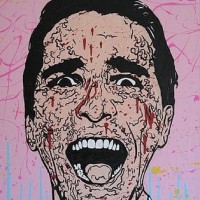 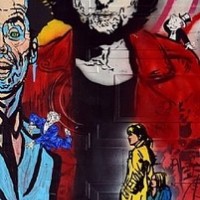 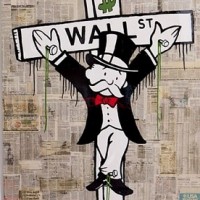 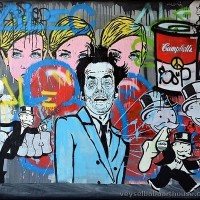 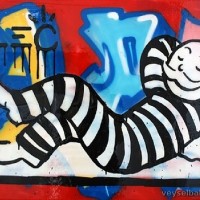 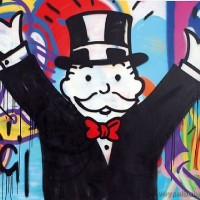 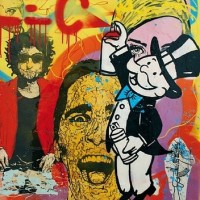 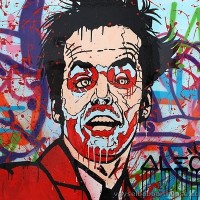 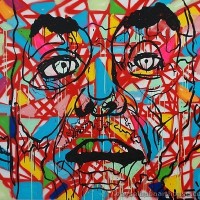