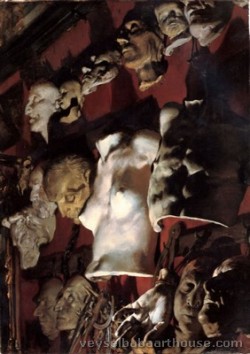 Adolph Friedrich Erdmann von Menzel (December 8, 1815 – February 9, 1905) was a German Realist artist noted for drawings, etchings, and paintings. Along with Caspar David Friedrich, he is considered one of the two most prominent German artists of the 19th century,[1] and was the most successful artist of his era in Germany.[2] First known as Adolph Menzel, he was knighted in 1898 and changed his name to Adolph von Menzel.

His popularity in his native country, owing especially to History Painting, was such that few of his major paintings left Germany, as many were quickly acquired by museums in Berlin.[3] Menzel's graphic works and drawings were more widely disseminated; these, along with informal paintings not initially intended for display, have largely accounted for his posthumous reputation.[2]

Although he traveled in order to find subjects for his art, to visit exhibitions, and to meet with other artists, Menzel spent most of his life in Berlin, and was, despite numerous friendships, by his own admission detached from others.[4] It is likely that he felt socially estranged for physical reasons alone—Menzel had a large head, and stood about four foot six inches.[4][5]

Menzel was born in Breslau, Silesia. His father was a lithographer and intended to educate his son as a professor; however, he would not thwart his taste for art.[6] After resigning his teaching post, Menzel senior set up a lithographic workshop in 1818. In 1830 the family moved to Berlin, and in 1832 Adolph was forced to take over the lithographic business on the death of his father. In 1833, he studied briefly at the Berlin Academy of Art, where he drew from plaster casts and ancient sculptures; thereafter Menzel was self-taught.[4] Louis Friedrich Sachse (de) of Berlin published his first work in 1833, an album of pen-and-ink drawings reproduced on stone, to illustrate Goethe's little poem, Kunstlers Erdenwallen. He executed lithographs in the same manner to illustrate Denkwürdigkeiten aus der brandenburgisch-preussischen Geschichte; The Five Senses and The Prayer, as well as diplomas for various corporations and societies.[6] 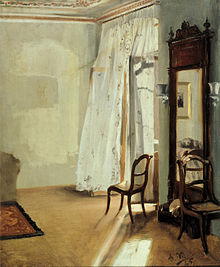 In the meantime, Menzel had also begun to study, unaided, the art of painting, and he soon produced a great number and variety of pictures. His paintings consistently demonstrated keen observation and honest workmanship in subjects dealing with the life and achievements of Frederick the Great, and scenes of everyday life, such as In the Tuileries, The Ball Supper, and At Confession. Among those considered most important of these works are Iron Rolling Mill (1872–1875) and The Market-place at Verona. When invited to paint The Coronation of William I at Koenigsberg, he produced an exact representation of the ceremony without regard to the traditions of official painting.[9]

During Menzel's life, his paintings were appreciated by Otto von Bismarck and William I, and after his death they were appropriated for use as electoral posters by Adolf Hitler.[2]

If these historical illustrations anticipated the literal qualities of early Impressionism,[10] it is paintings such as The French Window and The Palace Garden of Prince Albert, both painted in the mid- 1840s, that now appeal as "among the most freely observed of mid-nineteenth century images."[11] Such genre paintings evidence associations with French and English art. Though he was primarily an excellent draughtsman, art historian Julius Meier-Graefe considered him to be a "proto-impressionist" painter, whose graphic work hindered his painterly potentials.[12] Private drawings and watercolors made of dead and dying soldiers in 1866 on the battlefields of the Austro-Prussian War are unsparing in their realism, and have been described by art historian Marie Ursula Riemann-Reyher as "unique in German art of the time."[13]

The paintings which were available to the public garnered recognition not only within Germany, but from the French avant-garde as well: Edgar Degas admired and copied his work, calling him "the greatest living master",[14] and Louis Edmond Duranty wrote of his art:

"In a word, the man is everywhere independent, sincere, with sure vision, a decisive note that can sometimes be a little brutal....While being perfectly healthy he has the neurosis of truthfulness....The man who has measured with a compass the buttons on a uniform from the time of Frederick, when it is a matter of depicting a modern shoe, waistcoat, or coiffure, does not make them by approximations but totally, in their absolute form and without smallness of means. He puts there everything that is called for by the character (of the object). Free, large, and rapid in his drawing, no draftsman is as definitive as he".[15]

Notwithstanding Menzel's professed estrangement from others, his renown entailed social obligations, and in the 1880s the poet Jules Laforgue described him as "no taller than a cuirassier-guard's boot, bedecked with pendants and orders, not missing a single one of these parties, moving among all these personages like a gnome and like the greatest enfant terrible for the chronicler."[16] In Germany he received many honors, and in 1898 became the first painter to be admitted to the Order of the Black Eagle;[9] by virtue of receiving the Order, Menzel was raised to the nobility, becoming "Adolph von Menzel". He was also made a member of the Académie des Beaux-Arts in Paris and the Royal Academy in London. After his death in 1905 in Berlin, his funeral arrangements were directed by the Kaiser, who walked behind his coffin. 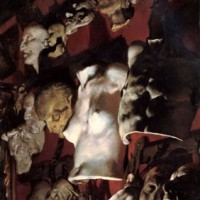 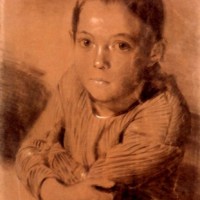 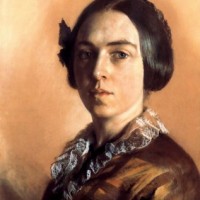 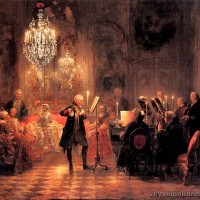 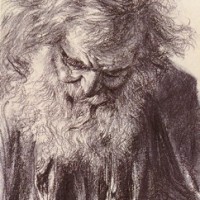 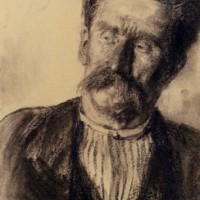 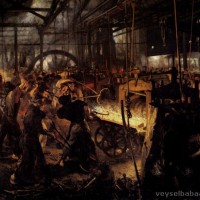 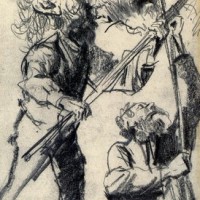 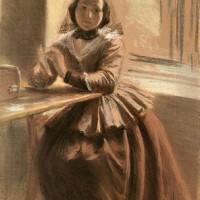 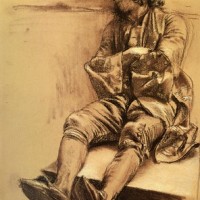 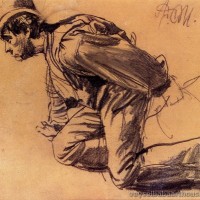 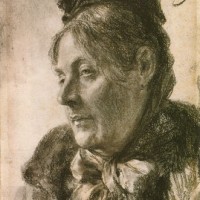